The Cajuns got back to the practice field and hit the Superdome turf for the first time Wednesday, beginning "real" bowl-game preparations.

NEW ORLEANS For at least part of Wednesday, it was business as usual for UL's football squad.

The Ragin' Cajuns got their first taste of the Mercedes-Benz Superdome at mid-day Wednesday when they went through their first on-site practice for this weekend's R+L Carriers New Orleans Bowl. The Cajun squad worked out for just over two hours in the 'Dome's rarefied air from 11:30 a.m. until approximately 1:30 p.m. 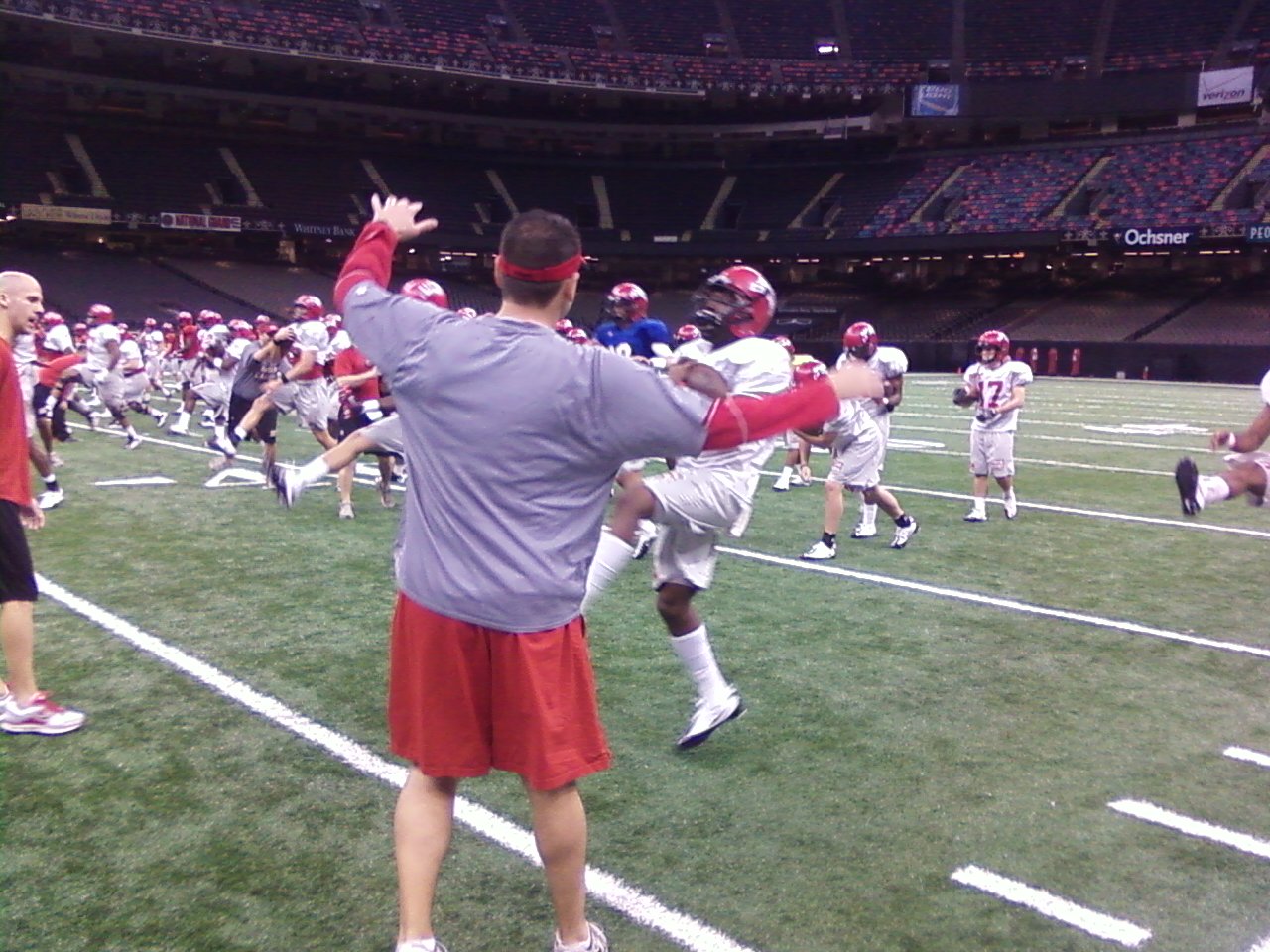 "I thought we had some intensity," says Cajun coach Mark Hudspeth. "I really feel like, with the character of this team, if we can get it to the fourth quarter and be right there, that we have a chance."

The Cajun squad hadn't held consistent workouts over the previous week due to university final examinations, but had worked out on Saturday, Sunday and Monday prior to Tuesday's travel day.

The emphasis on the defensive end of practice Wednesday was obviously aimed at stopping the powerful offensive attack of San Diego State, which like the Cajuns is 8-4 entering Saturday's 8 p.m. contest. The Aztecs averaged 422.9 offensive yards per game and exactly 30 points per contest during the season in a strong Mountain West Conference.

SDSU's balance is a big concern to the UL staff and players. Led by standout running back Ronnie Hillman Hudspeth says he's a future NFL star the Aztecs rushed for over 200 yards seven times in 12 games and Hillman finished with 1,656 yards, ranking third nationally (138.0 yards/game).

At the same time, SDSU quarterback Ryan Lindley has thrown for 2,740 yards and 20 scores this year, with only eight interceptions.

"You're not going to just stop a guy like Hillman," Hudspeth says. "We just have to be smart with some of the things that we're going to do defensively. We have to be smart on when and where we choose to blitz, and try to do a good job on getting them into some long-yardage situations."

"It's going to be a challenge," says Cajun cornerback Dwight "Bill" Bentley, part of a secondary that has seven interception returns for touchdowns this year. "We have to play within the scheme. As long as we do everything right, I think things will fall into place."

Bentley is likely the biggest injury question on the Cajun squad entering Saturday's game. The senior from Pahokee, Fla., who has 65 tackles and three interceptions this year to rank among UL leaders in both categories, suffered a dislocated shoulder in the regular-season finale 45-37 loss at Arizona.

But Bentley, who also handles some kick return duties, went through the entire practice and didn't show any obvious discomfort.

The only major Cajun loss for the bowl game is senior linebacker Le'Marcus Gibson, who will not play due to an injured left knee and tibia. Junior cornerback Jemarious Moten will be playing with a soft cast on one of his hands.

"That's a little concern for us if we get into a throwing game," Hudsepth said of the defensive hurts, "and we've gotten into some of them over the second half of the season."

If that happens, UL has a solid option in junior quarterback Blaine Gautier, who earned second-team All-Sun Belt Conference honors and was far and away the league's most efficient passer (150.33 QB rating).

"Blaine has done a great job," Hudspeth says. "He's got that rating, but he can throw it downfield extremely well and he's been able to turn bad plays into good plays for us an awful lot." 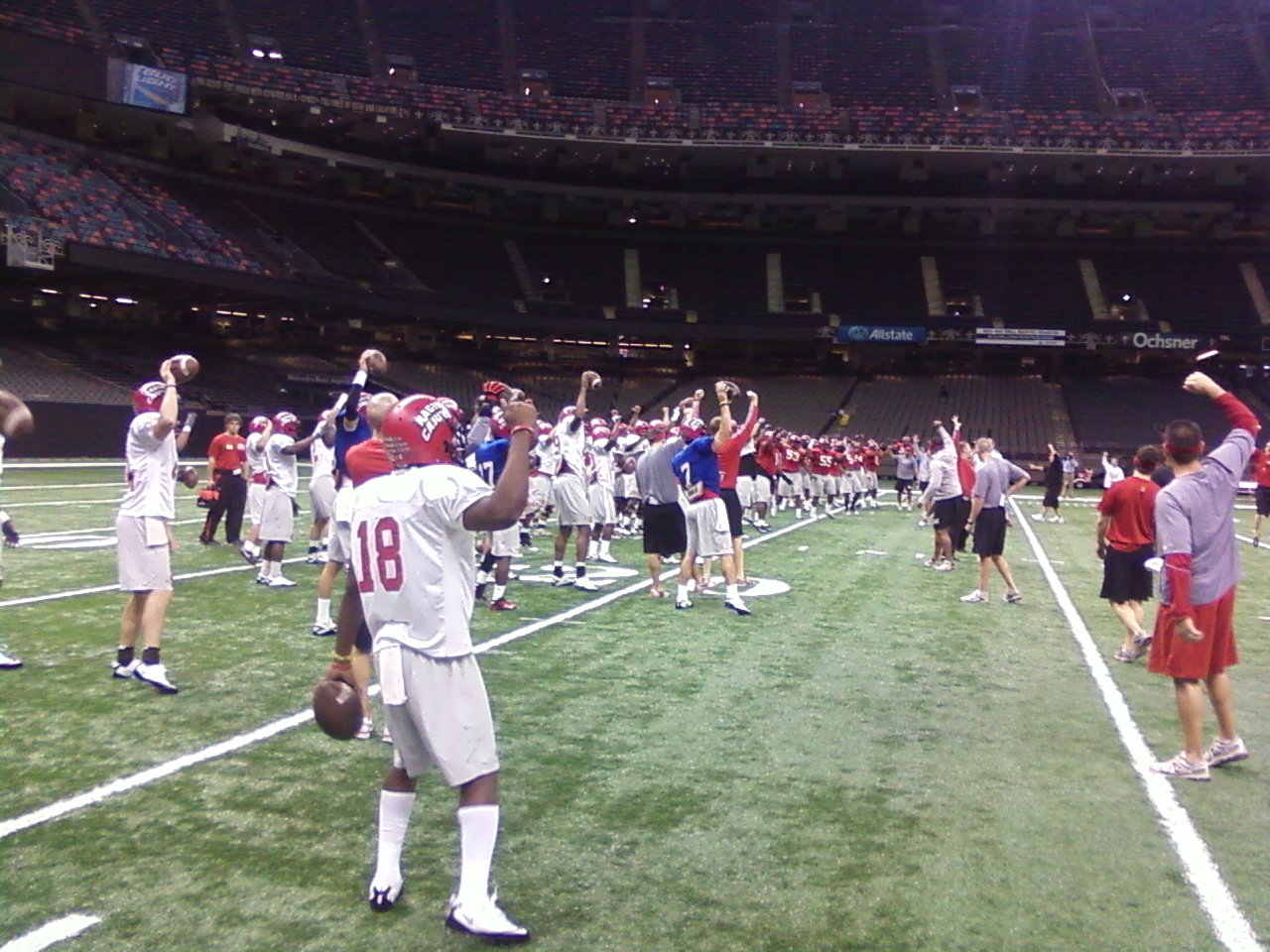 The Cajuns will hold another full-scale practice at 11 a.m. Thursday and a final walk-through on Friday. Thursday is also the New Orleans Bowl's official "Media Day" with activities just after noon with both teams, and the Cajuns are also tentatively scheduled to divide up for Thursday afternoon activities at Children's Hospital and at the Audubon Zoo with the NFL YET youth group.

And for fans who want to get the last word from Hudspeth, he'll be doing his radio show from 7-8 p.m. Thursday over KPEL-AM/Sports Radio ESPN 1420 live from Walk On's at 1009 Poydras St., a few blocks down from both the Superdome and the New Orleans Marriott team headquarters.