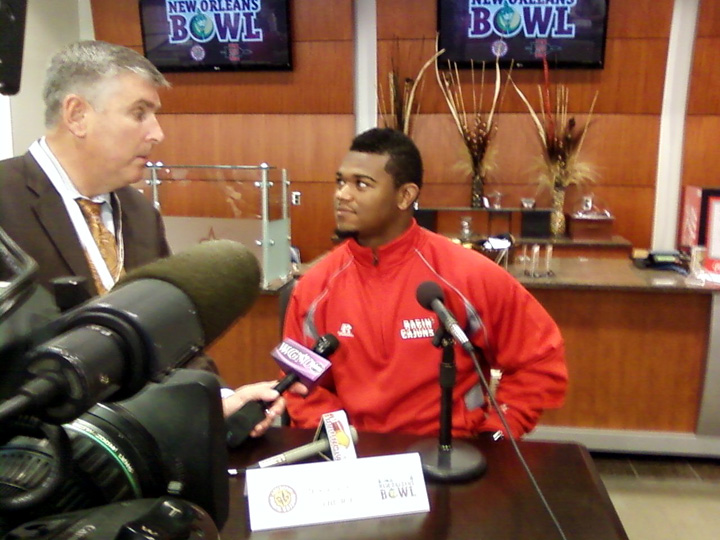 Long, the second-winningest coach in Mountain West Conference history, looks at UL's Ragin' Cajun football team and sees last year's Aztec squad. It's not like seeing dead people, but to him it's still a little scary.

"They [UL] are just like we were last year," Long says of the Cajuns. "You can just watch and see how excited they are to play. They may not get the notoriety that other teams in this state get, but they're a really good football team."

Being good, though, and also being 8-4 on the season isn't the reason that Long sees a mirror image.

San Diego State, the Cajuns' opponent for Saturday's 8 p.m. contest in the Mercedes-Benz Superdome, went a dozen years (1998-2009) without a winning season. But last year, the Aztecs finally caught the lightning in a bottle and won seven of their first nine games. Eventually SDSU wound up in the Poinsettia Bowl and beat Navy 35-14 to cap off a 9-4 season.

At Thursday's final full-scale press gathering before Saturday's Crescent City bowl clash, he talked about how special the 2010 season was for the Aztecs and also said he knows what having that kind of special season can do for a team's motivation.

"It really makes me nervous," he says. "Last year, we started the season with no expectations, just like they did this year, and now you can see what happens when you start having some success and you start building confidence."

Now, the cleats are on the other feet. Saturday, it's the Cajuns who are the bowl neophytes. UL is making its first-ever Division I bowl appearance and doing it only two hours away from its home turf. Prior to this season, UL hadn't finished over .500 since 2005 and hadn't had an eight-win season since 1993's Big West Conference champions finished 8-3.

"It's exactly the same situation, just in reverse," says Long, who was the defensive coordinator for last year's SDSU team and took over as head coach when Brady Hoke left for Michigan last December. This year's SDSU team has matched last year's record-wise, but Long says it's been a very different season and in many ways a more difficult one.

"Because they hadn't won in so long here, last year we made tremendous strides," Long says. "This year, the season started with higher expectations, and now people get upset if you don't win games you're supposed to or don't win by as much as you should. That's much harder on a team, and that's why I'm so proud of them for what they've done this year."

The Aztecs finished fourth in the strong Mountain West, a league paced by stellar performances by TCU and Boise State, but Long says he and his team weren't assuming they'd be playing past the regular season until the New Orleans Bowl came calling.

"Our team was deserving of a bowl, but you never know how that's going to work out," Long says. "The New Orleans Bowl people were kind enough to invite us and we appreciate being able to come here. I think I've been here twice, and probably 90 percent of our players have never been out of California."

The Aztecs did get to experience New Orleans a little on Wednesday, after arriving much later than anticipated (11:40 p.m.) Tuesday when their charter flight developed problems. SDSU had a players' party at the legendary Rock N' Bowl Wednesday night the same place the Cajuns held their event one night earlier and many of the Aztecs walked Bourbon Street prior to an 11 p.m. curfew.

"That was a little culture shock," says SDSU quarterback Ryan Lindley. "We're all kids from the West Coast."