The Cajun football team brings their own medicine to a local hospital, and heads on down to the zoo to join some needy kids. All in a day's work at the bowl game ...

NEW ORLEANS It's almost expected that collegiate football teams who take part in bowl games get to their host city and try to help make an impact in the local community.

But, as with everything else, few do it like the Ragin' Cajuns.

UL's football squad celebrated its third day of activities at the R+L Carriers New Orleans Bowl Thursday by doing something that most teams don't do the team divided forces and doubled its impact. 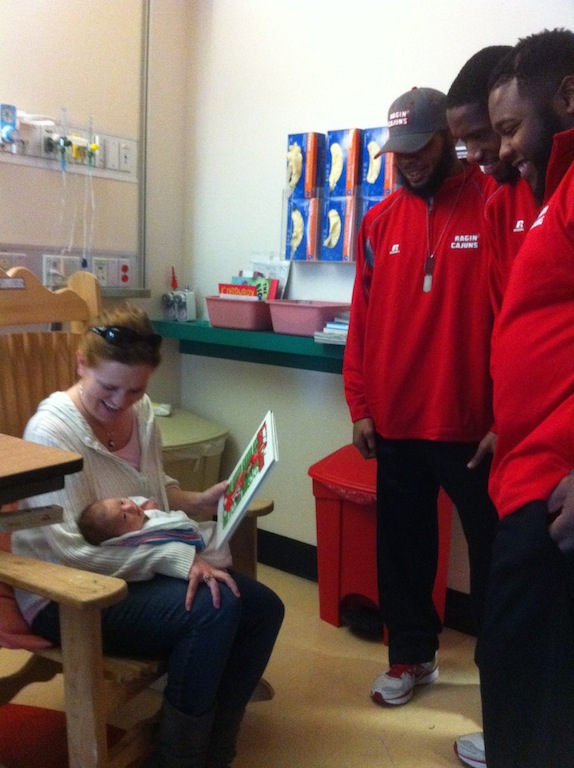 The senior members of the squad went with Cajun head coach Mark Hudspeth to Children's Hospital in New Orleans, taking just over an hour to visit with many of the youthful patients and doing their best to brighten some days.

Meanwhile, the rest of the squad as the legendary group The Meters once said  headed on down to the Audubon Zoo, where they linked up with a group of underprivileged children from a local elementary school. The juniors, sophomores and freshmen toured the zoo with just over 40 boys and girls.

"We're just returning the favor," Hudspeth says. "New Orleans has welcomed us so much this weekend, this is a chance to give something back to them."

Most teams make one such venture into the community. The Cajuns made two at one time, and they would have likely done more if they'd had the time or been able to work out the logistics.

"The whole goal is to spend time with kids that might otherwise be headed in a different direction," says New Orleans native, former Cajun football standout and UL director of football operations Troy Wingerter. "Our guys have always had a rapport with the community."

The hospital trip wasn't even the first for the Cajuns since the end of the regular season, and Thursday's trip to the zoo wasn't their only interaction with youth in the last week. Several squad members visited with many of the younger patients at Lafayette General Medical Center Monday.

"Our kids know they have a platform," Wingerter says. "They know how important it is for some of these kids to see a positive adult role model. We know that things like that don't just happen all the time, but we want them to at least try to be a beacon to impact those lives in some way. And every little bit of that we can do helps."