Between packing the house at Walk-On's and filling Bourbon Street with a "second-line" parade, UL's football fans made their first impact Thursday at the New Orleans Bowl.

NEW ORLEANS It's very difficult to describe what it was like at Walk-On's Thursday night. Suffice it to say that the unofficial gathering point for UL football fans other than the New Orleans Marriott headquarters hotel featured more red and white than your Christmas candy cane.

It wasn't as hard to set the scene that took place about two hours later in front of the Marriott, where hundreds of Ragin' Cajun football fans fell in line behind the UL Pride of Acadiana marching band and "second-lined" their way down Bourbon Street.

The latter isn't unusual in the Crescent City, since such scenes happen every Mardi Gras season. And for the Cajun faithful, every day has been like Mardi Gras since mid-October when UL became bowl eligible and all but locked down a trip to Saturday's R+L Carriers New Orleans Bowl.

The "official" bid came three weeks ago and rumors of UL claiming a spot in the nearest bowl to the Acadiana area were circulating much earlier. But it wasn't until Thursday night, when the Cajun Nation began descending into Canal Street for the weekend's festivities, before those followers actually got to take part in a "bowl" activity.

They didn't waste the opportunity. 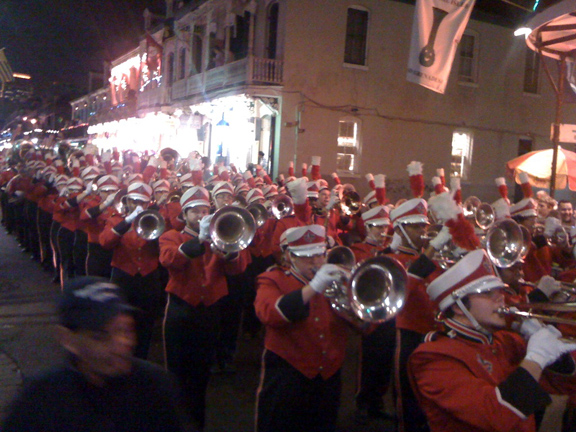 Music echoed off surrounding buildings as the UL band went through some of its familiar standards as the crowd in front of the Marroitt began to gather, and just after 9:30 p.m. the horde departed behind a police-car escort. The more-prepared had red-and-white parasols and swayed to the music. The more-inebriated swayed for a completely different reason.

The walking parade was last seen somewhere around the 400 block of Bourbon Street, where the band stopped and played the Fight Song in front of Rita's.

It was the first of two such marches scheduled in a two-day period. A similar parade is set for Friday, when fans will again gather in front of the Marriott at 5:15 p.m. to "second-line" to the Riverwalk Marketplace's Spanish Plaza for the bowl's annual "Free For All" celebration. Music by the Rebirth Brass Band and the Givers, along with both the UL and San Diego State bands, will be featured in a free event open to the public beginning at 5:30 p.m.

A lot of the fans who took part in Thursday's "second-line" got their start a couple of hours earlier at Walk-On's, just down the street from the Mercedes-Benz Superdome. UL's radio network has been doing its evening shows from that location since Tuesday, but Thursday night's broadcast also included Cajun coach Mark Hudspeth.

It was already loud before that 7 p.m. show, but it only took a second to get louder when Coach Hud made his way in.

"This has already been a great experience for our players," Hudspeth said to the radio audience and the packed house on hand. "They're having a blast. They're excited about the opportunity to play here, but they also know it's time to get to work."