Leave it to the Cajuns to turn a great party into a graduation ceremony, and then into yell practice. It's just life at the New Orleans Bowl.

NEW ORLEANS This weekend's appearance in the R+L Carriers New Orleans Bowl is the culmination of a successful season for the UL football team.

Friday afternoon, five members of that Ragin' Cajun squad had a completely different type of culmination, one that makes this week's bowl experience much more meaningful.

Five members of the Cajun squad Dwight "Bill" Bentley, Le'Marcus Gibson, Ladarius Green, Andrew "Rico" Joseph and Kyle Plouhar completed requirements for their bachelor's degrees during the fall semester. On Friday, during a break in the "Ragin' Cajun Fan Fest" at the New Orleans Marriott, those five donned full cap and gown and went through their own version of commencement exercises.

But this was like no graduation exercises you've ever sat through. 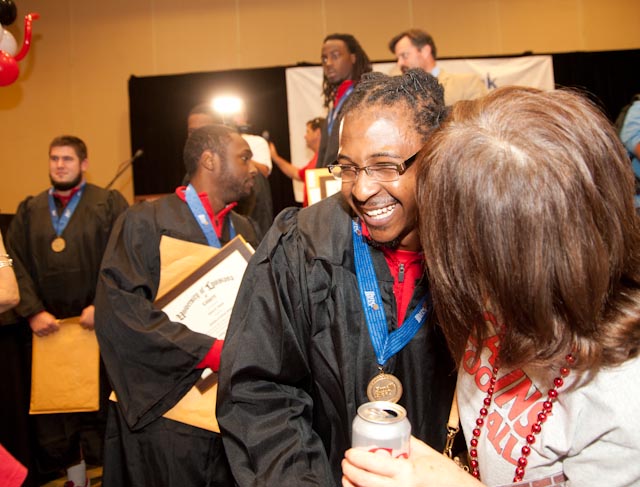 "This is what we talk about when we say student-athletes," said UL President Dr. Joseph Savoie, who handed out the diplomas and officially conferred degrees on the quintet. "They're here to get their education, and what we do is try to provide whatever help we can to help them be successful in that pursuit."

The five finished off that quest Friday, walking into the packed Marriott ballroom and through a gauntlet of their red-clad teammates toward the stage a spot where only moments before, Jamie Bergeron and the Kickin' Cajuns were revving up the Cajun faithful.

"By the power vested in me," Dr. Savoie yelled into the microphone at the world's most raucous graduation ceremony, "I confer upon you your degrees, with all the rights attached therein." And then, to the crowd, "Congratulate our newest alumni!"

Three other current Cajuns Brad McGuire, Chris Masson and Ross Goodlett had previously received degrees last spring and are in their final year of eligibility and were probably just a little jealous of their teammates for their exquisite timing on completion of degree requirements. 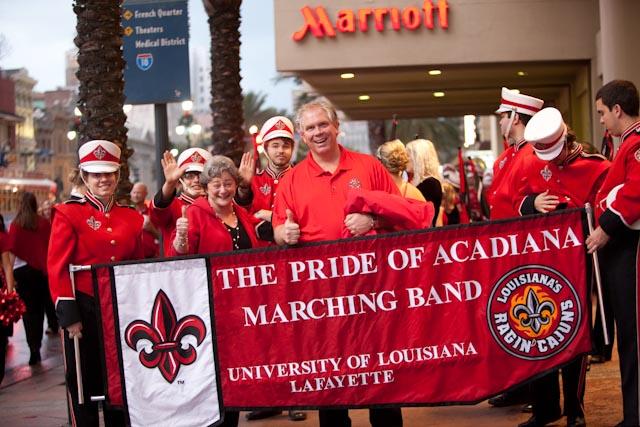 ESPN cameras recorded the ceremony, and it figures to be displayed during Saturday's 8 p.m. broadcast of UL's bowl contest against San Diego State.

Of course, with Cajun coach Mark Hudspeth around, nothing was going to go away quietly when there was a chance to get some "juice" going. Moments after the graduates left the stage, and while family and friends were still taking pictures, the always-effervescent Hudspeth turned the graduation party into a pep rally.

"Tomorrow's going to be a great day," he said to the crowd, his voice showing the strain, "but today has been a heck of a great day. You helped these guys reach two of their dreams, to graduate, and to play in and win a bowl game. And I want to tell you one more time, thank you for giving me the opportunity to lead your football team."

Hudspeth was just getting going, though. It was yell practice time, and Texas A&M's Aggies don't have much on the Cajuns when it comes to yelling. 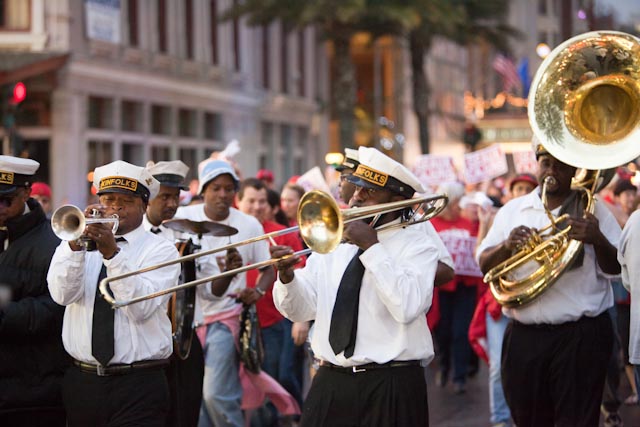 "The 'Dome's fixin' to be our home tomorrow night," Hudspeth yelled. "I want everybody right now San Diego State's quarterback is going under center, and I want it so loud in here that that dome's going to start vibrating. We're going to practice that right now."

With that, Hudspeth raised his hand, and the ballroom became one loud roar. The hand went down - silence. Back up - madhouse again.

"That's what we need from you tomorrow night," Hudspeth yelled, and quickly departed the scene with his team, heading for the New Orleans Saints practice facility for one final walk-through. Bergeron and the Kickin' Cajuns grabbed the fiddles again, and all was right in the Cajun Nation.