Brett Baer's 50-yard field goal on the final play gives the Cajuns an improbable win in the New Orleans Bowl.

NEW ORLEANS The Cinderella season got its storybook ending, thanks to Brett Baer.

And a defensive unit that shut down one of the nation's top running backs. 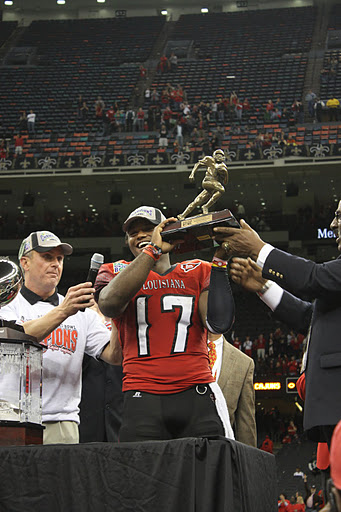 Ragin' Cajun head coach Mark Hudspeth thanked them, and everyone else, not too long after Baer's last-play, career-long, line-drive, 50-yard field goal split the uprights at the Mercedes-Benz Superdome, giving UL a heart-stopping 32-30 win over San Diego State in the R+L Carriers New Orleans Bowl Saturday.

"We couldn't have scripted it any better," Hudspeth said after the wild Cajun celebration on the Superdome turf immediately following Baer's kick. "We win on hard work, and we win on belief. I can't say enough about these guys."

The Cajuns' ninth win of the season was without question the sweetest since it came in UL's first-ever appearance in a Division I bowl game. And now, the Cajuns own much of the New Orleans Bowl record book.

Gautier, named the Most Valuable Player in the game, threw for a bowl-record 470 yards and three scores, completing 24 of 40 passes. 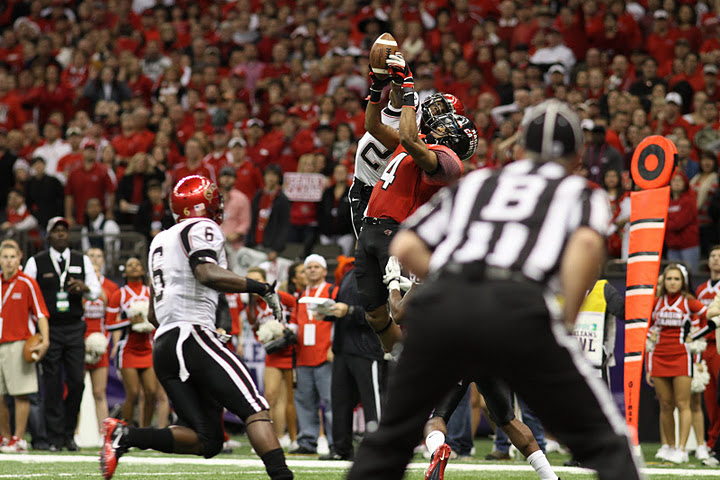 Lawson caught nine of those passes, tying a bowl record, for 193 yards also a bowl record and two of those scores. Tight end Ladarius Green had 121 receiving yards and the other score. In fact, in the entire 10-year history of the New Orleans Bowl, only four previous receivers had ever had 100-yard games, and the Cajuns had two of those in one night.

"I just wanted to come out and do what was best for the team," Gautier said after receiving his MVP award on the field. "It just so happened it was in dramatic fashion. It was so joyful to see the fans in the stands. It was a beautiful sight."

To that crowd one that topped the old New Orleans Bowl record by over 12,000 the most beautiful sight was the ball hitting the net behind the north-end uprights, and Baer's teammates mobbing him at midfield after his career-long kick.

"I was kind of down on myself because I'm thinking, man, the two extra points," said Baer, who had one conversion blocked and one hit an upright during the game. "My holder (Brady Thomas) just said not to worry and that we've done it before. I had all the confidence in Blaine and the offensive players that they'd get it close enough."

They only had 35 seconds to do that and no time outs, but Gautier hit Lawson for back-to-back 13 and 26-yard completions that took it to the SDSU 43, where Gautier spiked the ball with seven seconds left. He then threw a five-yard out to Harry Peoples, who got out of bounds at the Aztec 38 with two seconds left.

"They tried to draw us offsides either with a movement or noise or voice," Hudspeth said. "They called it on them instead of us. To be honest with you, it was long enough to make it even if he didn't move it up. This kick will go down in history."

It did appear long enough when it hit the big Allstate net, but Baer wasn't certain. 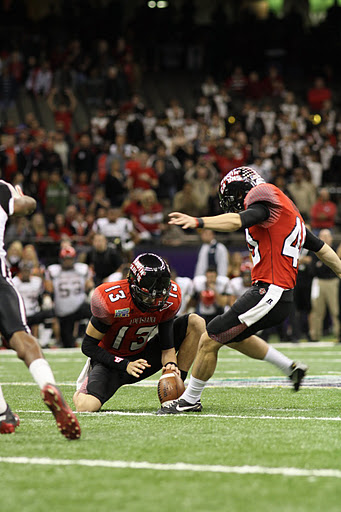 "I have no idea," when asked if it would have been good from 55 yards. "I didn't even see it go in. I just took off running."

Even with all of those offensive numbers, it may have been a defensive strategy that was most important in the Cajuns giving the Sun Belt Conference five wins in the last six New Orleans Bowls.

The UL defense went into the game aiming to slow down the running game, and that unit bottled up San Diego State standout Ronnie Hillman from the opening kickoff.

Hillman, who may declare for the NFL draft after completing his sophomore season, ranked third nationally in rushing entering the bowl season. But the pursuit-minded Cajun defense stacked him up for losses totaling 16 yards on three of his first five carries.

For the night, the sophomore had 55 net yards on 24 carries and had only one tote over 10 yards, and was limited to two receptions out of the backfield for 14 yards.

"For us going in, we knew we had to stop Hillman," Hudspeth said. "He's a very good back, and we put a lot of people at the line of scrimmage to stop him. We had to do that, and that hurt us a little in the passing game. But if you don't do that, you're going to bleed a slow death and he's just going to grind out yards on you all night.

"For the most part, it worked."

"I really think our speed affected him," said Cajun secondary coach Tim Rebowe of Hillman's struggles. "We kept getting after him from the back side. He'd try to bounce it out and we were there. They started doing something they really didn't want to do."

The concentration on stopping the running game the 68 rush yards was by far a SDSU team low this year did open up the Aztec throwing game, and SDSU quarterback Ryan Lindley had by far his best numbers of the season. The senior, who holds all of the Aztecs' career passing records, hit on 28-of-49 passes for 413 yards and three scores, after never topping the 350-yard mark all season.

"When we stopped the run, they still kept getting big plays," Rebowe said. "That tight end (Gavin Escobar) is a heck of a player, and their receivers kept getting themselves in good position. But our offense came through, just like they had all year." 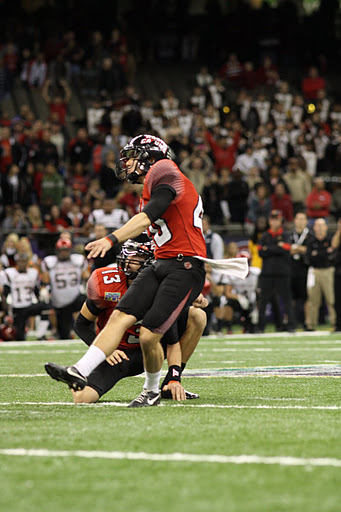 The Cajuns' defensive corps was criticized repeatedly during the 2010 season, and that unit still gave up almost 400 offensive yards per game this season despite going 8-4 in the regular season. The unit was successful because of big plays, including seven interception returns for scores during the year.

ULL didn't force a turnover in Saturday's bowl win, and in fact that unit suffered a devastating loss 30 minutes before kickoff. Senior linebacker Devon Lewis-Buchanan, the team's second-leading tackler on the season, went down with a dislocated kneecap during pre-game warmups and was lost for the contest. He wound up hobbling the sidelines the entire game.

The Cajuns were already short-handed in the linebacker corps, with senior Le'Marcus Gibson already sidelined for the year with a tibia injury suffered against Arkansas State. They spent the whole night patch-working together a linebacker corps around fellow senior Lance Kelley. 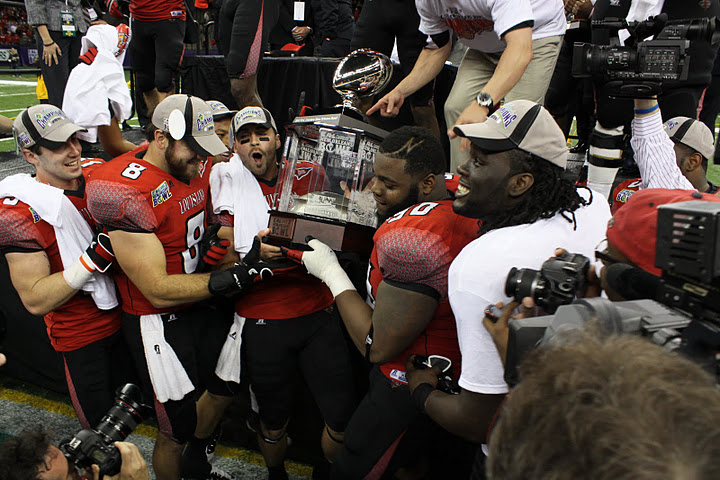 "At the end, it was on us," said Kelley, the team's leading tackler on the season with 101 and again on Saturday night with 11. "It was all these guys working their butts off, making plays. We knew we had to just keep them close, and our offense would come through for us."

"Our guys win on hard work and on belief," Hudspeth said. "When they had to make plays they did, and they beat a very good football team tonight when no one gave us a chance to win. That says a lot about the character of these young men."

The Cajuns rolled up 568 offensive yards and had five drives of 72 or more yards behind Gautier, whose previous best passing game was 419 yards against Western Kentucky. Lawson's total was also a season high, but it was also his fifth 100-yard game in UL's last eight outings.

"I really think our guys have such a confidence, such poise, that they expect to be successful in that situation," said offensive coordinator Jay Johnson. "They knew that all we needed was a chance, and it played out that way tonight."