Katie Meaux grew up in Lake Charles then moved to Baton Rouge to attend LSU and become a dental hygienist. She married her high school sweetheart, Jacob. But nothing stopped her baking. Starting in the kitchen with her mother and continuing on through college, whenever someone said they wanted a cake another friend would say, "Oh, hey! Katie bakes!" This catchphrase would become Meaux's brand after a brush with danger. 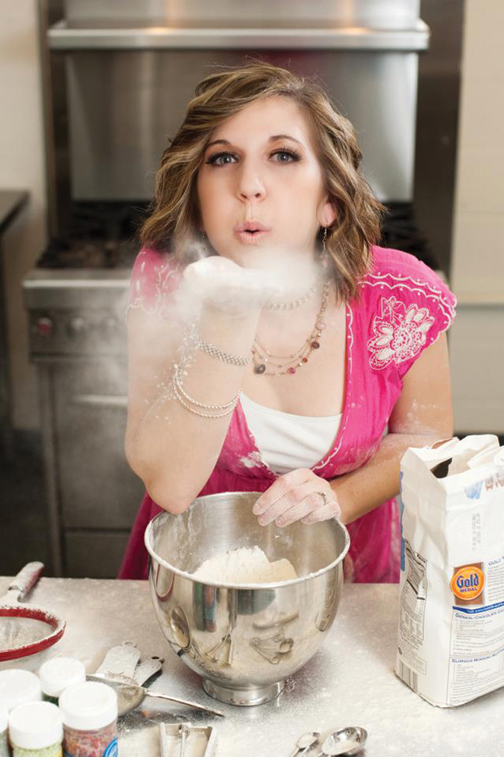 Katie Meaux grew up in Lake Charles then moved to Baton Rouge to attend LSU and become a dental hygienist. She married her high school sweetheart, Jacob. But nothing stopped her baking. Starting in the kitchen with her mother and continuing on through college, whenever someone said they wanted a cake another friend would say, "Oh, hey! Katie bakes!" This catchphrase would become Meaux's brand after a brush with danger.

Meaux had been happily working as a hygienist for nearly three years when a jarring event shook her: in January 2011 her husband suffered pneumothorax. Although in perfect health, Jacob's lung suddenly collapsed - odds of it happening are millions to one - and Meaux spent two weeks in the hospital by his side. "When he was sick I had a lot of time to think. Life to too short to not go for what you want," she recalls.

This is when Meaux began working part-time at Cupcake Couture in Baton Rouge. For six months she learned how to bake professionally, how a business like that is run, gradually decreasing her hygienist hours to work more in the bakery. After being certain this is how she wanted to spend her professional life, Meaux knew one other thing: "I knew I had to have it in Lafayette," she says. Although neither she nor her husband had ever lived here, this was a city with which they had fallen in love. Katie Bakes opened Nov. 26.

Katie Bakes' concept is simple - for now: offer a few things and offer them very well. It's in the old Scoops location at 1042 Camellia Blvd. in River Ranch.
Community Coffee is served along with soft drinks, water and milk to be consumed with the sweet treats: cake pops and whoopie pies.

Cake pops are the cupcakes of 2012. They are made by crumbling a baked sheet cake and mixing it with a certain amount of frosting then scooping it into balls, rolled, chilled and stuck with a tiny stick before taking a frosting bath and being decorated. The popularity is easy to understand - especially at events, offering morsels of sweetness on a stick allows for easier mobility and less mess. If you eat cake on a stick you have two bites of whatever flavor, which means you can have ten different cake pops and try ten different flavors equivalent to a piece of one flavor of cake. Plus no forks or plates to bother with, simply toss the stick.

Several different flavors were tried - remember, small bites of cake mean no guilt. One was Chocolate Vanilla: chocolate cake and vanilla bean buttercream blended only to be coated with a layer of chocolate and dashed with stripes of vanilla. Another was the Pumpkin Spice cake pop made with pumpkin cake and spiced cream cheese before getting a coating of vanilla and kissed with spice. It's like fall fell into your mouth.

Cake pops are stunningly moist, much more so than regular cake. A bit richer, to be sure, but not overwhelmingly so.

Whoopie pies are not as familiar to Southerners. Whoopies are primarily a New England dessert that came out of the Amish communities. Think of it as a cookie sandwich. Two soft cookies with a filling of light, fluffy frosting. This past year Maine, where they are designated officially as the "state treat," baked a whoopie pie that weighed more than 1,000 pounds to generate money for soldiers overseas.

As far as we know, Katie Bakes is the only merchant making whoopie pies in Lafayette. We should probably be grateful because there are only so many gyms.

So how did a Louisiana girl come to cook whoopies? "I saw them in one of my baking cookbooks," Meaux says, of which she estimates to have more than 60. They intrigued her so she gave them a try, settling on a Root Beer Float with two soft, thick, vanilla cookies filled with a mixture of root beer buttercream and vanilla. "Remember the old A&Ws?" Meaux asks. "That's what I was going for, the taste of those root beer floats." She succeeded.

The whoopie pies offered are changed daily and, like the cake pops, what is on the Katie Bakes website menu is not necessarily what is offered in store that day.
Katie Bakes is offering parties for kids and adults and for any type of occasion. Around a dozen can be comfortably seated and kids can decorate cake pops with help from employees and their parents. "I want to bring the feel of the small town bakery back," Meaux says. "I want kids with their moms and dads getting excited to bake, like I did." Who knows? Meaux is probably cultivating a future baker right now.