Squeezed out by a lack of finances and ignored by the Republican establishment in the race to secure the GOP presidential nomination, Buddy Roemer may turn to an non-partisan, online organization. 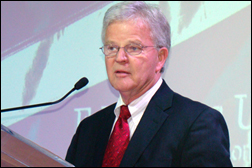 Former congressman and Louisiana Gov. Buddy Roemer, squeezed out by a lack of finances and ignored by the Republican establishment in the race to secure the GOP presidential nomination, may turn to an non-partisan, online organization that says it has the resources and technology to nominate a mainstream presidential ticket and get it on the ballot in all 50 states next fall.

Roemer has said he may turn to Americans Elect as an alternative to the Republican Party if he can't get into any debates planned in New Hampshire, where he has been living for months campaigning across the state. Roemer has already given up on participating in the Iowa caucuses next month. And Mark McKinnon, Roemer's press secretary during his successful 1987 run for Louisiana governor and later President George W. Bush's media advisor who now serves on Americans Elect's advisory board, tells The Atlantic he believes Roemer can generate appeal for both conservative and progressive voters through his respective attacks on spending and corporate influence on politics.

Americans Elect says on its website - and its administrators have said in TV and newspaper interviews - that it's well on its way to securing enough signatures nationwide to compete across the union. The group will nominate a ticket via an online convention in which millions of registered voters serve as "delegates." The group claims no ties to any political parties, political action committees or special interests.

Salon, meanwhile, has an interesting story questioning whether Americans Elect is really what it claims to be.