Charlie Goodson first entered Lafayette's restaurant scene with Judge Roy Bean's. The year was 1972, his partner was the late artist Earl Hebert, and the concept was the city's first singles bar and grill located in the current Café Vermilionville on Pinhook Road. Goodson would continue in the industry with Hub City Diner and Charley G's, which opened in 1985, and other concepts in Metairie, New Orleans and Destin.

Veteran restaurateur Charlie Goodson adds another dash of youth to his upscale eatery.
By Erin Z. Bass Photo by Robin May 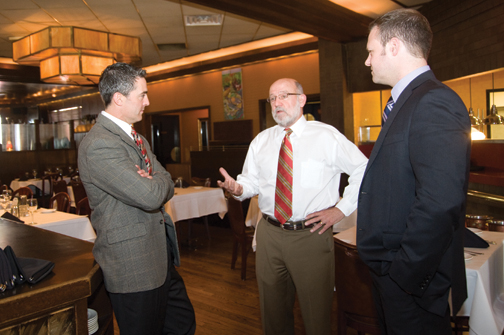 Charlie Goodson first entered Lafayette's restaurant scene with Judge Roy Bean's. The year was 1972, his partner was the late artist Earl Hebert, and the concept was the city's first singles bar and grill located in the current Café Vermilionville on Pinhook Road. Goodson would continue in the industry with Hub City Diner and Charley G's, which opened in 1985, and other concepts in Metairie, New Orleans and Destin.

After 27 years at Charley G's and 40 years in the business, Goodson says it's time to prepare for the future. He's not even thinking about retiring; instead, he wants to grow.

"We want Charley G's to continue on, so we need to surround ourselves with talented people and younger people," he says. "We've always been a family restaurant, but to go the next step, we need to bring some people in with us."

To usher in the next phase of Charley G's and branch out from his Ambassador Caffery location, Goodson has teamed up with chef Marc Krampe, whose family owns the local McDonald's franchise, and Jody Ferguson, owner of Casa Olé Acadiana, to form Southern Hospitality Kitchens. Brothers-in-law, Krampe, 29, and Ferguson, 42, become part owners in Charley G's Jan. 1 and will be responsible for assisting Goodson in new business opportunities.

Goodson says their first project will likely be a more casual restaurant than his upscale namesake. "As a group, we've done some restaurants in the past, and I wanted to do it again and try to stay local," he says. "There's a lot of opportunity here. You see restaurants opening all the time, and we want to be one of the people opening them."

Goodson's wife, Dell, and daughters, Claire and Anna - who handle the finances and marketing respectively - will remain at Charley G's, as will award-winning chef Holly Goetting and longtime General Manager Courtney Vincent.

"Part of the reason that we decided to go forward with this company was because of Holly and Courtney," Goodson says. "They want to grow, so all of those reasons came together and that's why we pursued this concept."

Goodson has known the Krampe family for years and says he, Ferguson and Krampe struck up a conversation about the future of Charley G's a while back. When Krampe moved back home to Lafayette last year, the conversation continued and the three decided to announce their partnership in mid-December.

This isn't the first time Goodson has teamed up with other investors or branched out. In the 1990s and early 2000s, he partnered to open a Charley G's in Metairie, Metro Bistro in New Orleans and Tib's Seafood Café in Destin, Fla. Since then, he says he's been focusing solely on Charley G's; 2011 was a banner year for the restaurant.

But after nine years on his own, Goodson is ready for some new blood and fresh ideas. "I didn't want the Charley G's concept to eventually fade away," he says. "It needs to go forward, and I wanted to do new concepts, too, so I needed some help. We kept talking and we decided that we had a lot of the same philosophies about running a family business, and now we'll be a three-family business."

A graduate of the University of Kentucky, where he met his wife, Ferguson moved to Lafayette in 1995. His first stint in the restaurant industry was with a Casa Olé franchise in Texas. He went on to open several more Casa Olés before taking the franchise to Lafayette and Opelousas. (He recently completed his franchise agreement with the Lafayette location, which is now home to the second location of Dean-O's Pizza, but still owns the Opelousas location.)

As a teenager, Krampe worked for Ferguson as a dishwasher and busboy in Casa Olé's early days, and while they each have very different personalities - Ferguson is all business and Krampe is a soft-spoken foodie - they both say being part of Charley G's is a once-in-a-lifetime opportunity.

"I always ask people in conversation, What's the best restaurant in town?'" says Ferguson. "Most times it's Charley G's, so who wouldn't be excited to be a part of this deal? I think we have a lot to learn in working with Charlie, and we certainly believe we can help Charlie and his family along the way to grow and create opportunities."

Krampe, a graduate of Le Cordon Bleu in Austin, Texas, remembers eating at the restaurant as a child. "I used to always tell my dad, I want to be that guy who walks around in the suit shaking everybody's hands," he says. Since moving back to town, he's been working at McDonald's and going through the franchise's management training program to sharpen his front-of-the-house skills.

The three partners are still brainstorming their first venture as Southern Hospitality Kitchens, but Goodson says they've discussed everything from a barbecue joint to a gastropub. No matter the cuisine, projects will be rooted in Southern cooking techniques and Southern hospitality.

They joke about bottling Charley G's gumbo, but are serious about considering a line of spices or seasonings. "There's a lot of opportunities in this industry other than opening up restaurants," says Goodson. "Our first project might be a cookbook. Who knows?"