They build them fast and they price them to sell, and their cookie-cutter subdivisions are beginning to spring up on the margins of Lafayette, north and south. With relatively low unemployment and a robust economy, metro Lafayette was naturally a magnet for D.R. Horton. 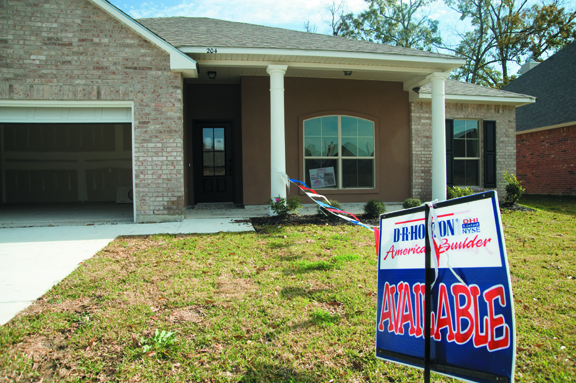 They build them fast and they price them to sell, and their cookie-cutter subdivisions are beginning to spring up on the margins of Lafayette, north and south. With relatively low unemployment and a robust economy, metro Lafayette was naturally a magnet for D.R. Horton, which bills itself as "America's Builder," and rightfully so.

Founded in the Dallas/Fort Worth area in 1978 by Donald R. Horton, the publicly traded company is the largest home builder in the U.S. and has had that distinction since 2002. The company specializes in single-family homes and has a footprint in more than 70 markets in 26 states. The home builder has been so successful it's headquartered in a gleaming, 38-story glass skyscraper in downtown Fort Worth known as the D.R. Horton Tower.

One might assume that a national home builder and its "McHouse" approach to neighborhood development would make local builders a bit uneasy. But Mike Thompson, president of the Acadian Home Builders Association, is circumspect, telling ABiz: "We really don't feel it's appropriate to comment on any private company that moves into Lafayette." Besides, Thompson adds, it's something of an apples-to-oranges situation because DRH is a high-volume builder while most of the local builders are much smaller operations.

The company is selling homes in Lafayette Parish in five developments: Centennial Village, Envie, Fieldview and Oak Springs in Carencro and Country Lakes in Duson, described in online promotional materials as "your destination for affordable luxury homes close to the city." Youngsville Mayor Wilson Viator says deals are being worked out for more DRH residential development in Youngsville through developer Robert Daigle, who didn't return ABiz's calls for comment, and DRH is making its presence felt in Abbeville, Baton Rouge, Hammond and Lake Charles, too.

The homes range in size from about 1,200 square feet to 1,700 square feet, are typically three-bedroom/two-bath and cost an average of $150,000. DRH keeps its formula simple, offering home buyers only a handful of plans from which to choose  - plans it replicates all over the country. Amenities include appliances like dishwashers and ranges, ceramic tile, carpeting, fireplaces and security fences, and in some cases furniture like bedroom vanities.

Exactly how DRH keeps its prices so low remains a bit unclear. A local sales representative tells ABiz she's not authorized to speak about the company's business model, referring the paper to a regional rep in Baton Rouge who referred us to the corporate office in Texas. A spokeswoman there didn't return our call by deadline for publication.

Whether DRH is delivering a solid product and backing it up with quality customer service also remains up for debate. One consumer rating website in particular, PissedConsumer.com - we know where this is headed - is overflowing with vitriol directed at DRH: "I wish I would have read all these complaints before I ever built. They are stealing people's money and giving horrible construction in return," complains one customer. "D. R. Horton must be on the lowest rung of the construction ladder. ... Not only has their shoddy construction cost me thousands of dollars, but also induced prolonged bouts of rage," fumes another.

One Horton purchaser complains she was "forced to go through their mortgage company or [I] wasn't allowed to purchase the house," a caveat the company hints at in a disclaimer on its website: "Incentives and seller contributions may require the use of certain lenders or title companies, some of which may be affiliates of D.R. Horton, and could affect your loan amount."

There's even a website, DRHortonSucks.info, devoted entirely to carping about the company, with links to lawsuits against DRH and other documents.

But you won't hear Phoebe Hoffpauir complain. Along with her husband and teenage children, Hoffpauir moved into Fieldview subdivision in Carencro last summer. She tells ABiz she's been delighted with her D.R. Horton experience, from selecting a floor plan through construction to settling in.

"This is the area that we wanted to be in - we're both from Scott," Hoffpauir says. "I graduated from Carencro High, and my kids were already at Carencro High and [the agent] brought us here; we loved the neighborhood, we loved the area."

Hoffpauir says she and her husband had been looking at older homes in the Lafayette area - the family's square footage needs and price point made an older home the likely option. Until a friend at church told them about DRH.

"It was just easy," Hoffpauir says. [Our sales representative] made it very, very easy. We came and looked at several of the floor plans offered for our neighborhood. We fell in love with this particular floor plan. The price was amazing. And to have it brand new and to get all the guarantees as far as the work on the home and the warranty was wonderful."

Like most national home-construction and real estate firms, the last few years have been less than spectacular for DRH, although it has fared relatively well. In late December, investment website The Street rated DRH stock as a "hold," concluding that the "company's strengths can be seen in multiple areas, such as its revenue growth, increase in net income and solid stock price performance. However, as a counter to these strengths, we also find weaknesses including disappointing return on equity, weak operating cash flow and poor profit margins."

Financial News Network's Mallory Stone was bullish on DRH, citing it as having the highest earnings growth among home builders. Stone also noted its robust rebound in stock price, which at $11.93 per share was, as of late December, up 49 percent from its low point in 2011.

For Hoffpauir, future earnings and stock prices are of no concern. She loves her new home and characterizes buying through DRH as "an amazing experience."

And the AHBA's Mike Thompson, while unwilling to speak negatively (or at least candidly) about DRH, sees the glass half full: "I will say that it indicates a lot of positive things about Lafayette," he says. "It's indicative that Lafayette has a healthy economy that anyone moves into town."