Julie Calzone combines her equestrian hobbies with years of experience in the advertising industry. By Erin Z. Bass

Julie Calzone combines her equestrian hobbies with years of experience in the advertising industry. By Erin Z. Bass 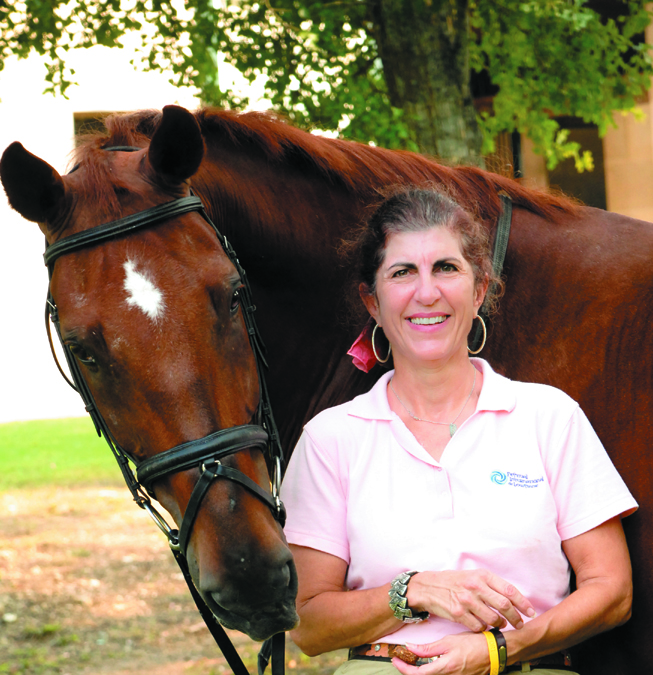 Since the 1980s, Julie Calzone has been running her advertising, marketing and public relations firm Calzone & Associates, located in a historic house in downtown Lafayette. She originally started her career as a rock 'n' roll promoter, but Calzone's real passion is horses. She's been riding and competing since she was a child. Calzone's passion and business have crossed paths over the years, and her firm has several equine-related clients. It was a visit to the Royal Windsor Horse Show in England, however, that inspired her to enter the horse transport business in 2006. Calzone was impressed by the motorized vehicles used to transport the animals in Europe and decided to team up with Indiana RV dealers Tom and Carolyn Stinnett to bring the concept to the U.S. After five years of hard work and a few models, their 2012 Equine Motorcoach debuted at the National RV Trade Show at the end of November. Calzone says the product, which is the first to combine a recreational vehicle and a horse trailer in one unit, is only the first in a long line of products to service the horse industry.

Since you just returned from the National RV Trade Show, tell us how you came to be there showing off your new Equine Motorcoach.
As you progress in your career, you get a little more definition of who you are and what you want to do. Time has brought me experience in a couple of industries that happen to be equestrian and the RV industry. Through that sport and through the horses is how I sort of created a social life and a life outside of what I do for a living. Case in point: I'm working as an ad agency and the national media person for Camping World and had a meeting in D.C. I meet Tom Stinnett, who is one of the largest independent RV dealers in the U.S. He co-chairs the "Go RVing" campaign. A few months later, I go on assignment to his dealership, and the first thing that Tom says is, So, how are your horses?' A few months later, his wife, Carolyn, and I end up on the grounds of Windsor Castle at the Royal Windsor Horse Show. We're walking around and I see these all-in-one motorized vehicles that they transport horses in. All I could think of is how am I going to get one of these to the U.S.

How long ago was that and when did the very first model debut?
We started the company in 2006, and we started building our first demo in 2007. We debuted the product in 2007 at the National Horse Show, but we used a European version. We sold a few of them, and it was posted about $750,000-$800,000, so the market's pretty limited at that price point. The economy got a little rough for everybody, so we kind of retrenched and went back to the drawing board, realizing the price point really is just under half a million for one of these.

Todd Zimmerman designed your interior. What does horse style look like?
They're standard materials that the manufacturer had, but Todd and his staff are so great at small spaces, and they picked the fabrics, the leathers, the flooring and they did the cabinets with a high-gloss varnish. I can't tell you how many manufacturers came in and said, How'd you get the cabinets like that?' They're actually creating some fantasy packages for the interior design. The only other company that does anything really creative is Airstream.

Have you spent the night in it yet?
I stayed in it during the day. When I'm there, I'm showing it, so we have to keep it pretty clean, but it would be like nothing to stay in it. It would be as simple as staying in my house.

What was the response to the vehicle at the show?
I don't think any of us were prepared for the response that we got from the industry itself. From the time we opened the exhibit, even pre-show, it was nonstop. All the major manufacturers came to see our vehicle and could not believe we had achieved the quality at the price point that we had. We have a lot of high-tech stuff in it. We worked with RV-ID, so we have a GPS tracking device in it. We worked with Rand McNally, and we have their RV special navigation unit in it. We have the solar panels, so we have a lot of high-tech stuff that's in the coach, and we already have two or three other products down the line. We've pre-qualified a few dealers that we're pretty sure we're going to give them territorial geography. This vehicle just addresses the whole of what the horse industry's looking for. Our next product out is going to be a smaller truck, where we're going to do a two-horse and a smaller living accommodation, a smaller truck for people. So, we're starting to build out a lot of our horse products, and it was our intention to build a line.

Where are your own horses located?
Right now, four of them are in Carencro at Woodland Hills Equestrian Center, and then I have another young horse that just went to Le Bocage Stables in Lake Charles. They have a Grand Prix rider who has ridden World Cup horses who rode one of my young horses that I bred and raised. He really believes she's a World Cup horse, so hopefully one day I'll be sponsoring some Olympic trial that I'll be giving the championship award to my own horse.

What's her name?
Her name is Betty P. I named her after a friend of mine, Betty P. Ramsay, who died the year before she was born. All the Dutch babies the year my horse was born all had to begin with the letter B.

What other horse-related businesses have you worked with?
I have my own Calzone Sport Horse. Louisiana Thoroughbred Breeders Association is one of my clients. That is the most successful breeding program probably in the world, and it's why Kentucky is suffering and we're not. I have another business that is just going into market and has been in development for two and a half years. It's called Equine Alert. We're doing video monitoring, security monitoring, fire monitoring and safety training systems. I've partnered with Acadian Monitoring Safety Management Systems. Like I said, I'm an entrepreneur.

Do you ever sleep?
Oh God, yeah. I sleep well. When an airplane takes off, most often I'm asleep.

How often do you ride?
Every day that I'm home, I try to ride. And my youngest horse, he was born in a C year, his name's Calzone. I named a horse after myself. I'm not sure who's who on that one.