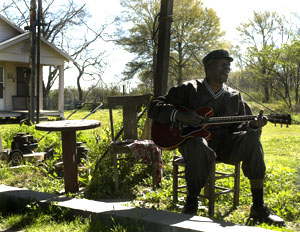 When Harry Hypolite was killed in a car accident June 22, Acadiana lost one of its most soulful bluesmen and an important link to Clifton Chenier, the King of Zydeco. Hypolite played with Chenier until Chenier's death in 1987, and the two men shared many musical and personal traits: fierce pride, a love of their craft and an unwavering work ethic.

In recent years, Hypolite was a fixture on the Acadiana club scene, regularly playing at venues such as 307 Downtown, Artmosphere and Clementine's in New Iberia. When I last visited Hypolite at his trailer in Cade in the spring of 2004, it was a reminder of his signature warmth, determination and optimism. He never flinched in the face of the financial hardships and health issues, and our conversation was filled with his hopes for international festival shows and recording future albums.

Harry Hypolite finished his day's work at the Fruit of the Loom factory in St. Martinville, La., and Clifton Chenier came by to see him. Hypolite occasionally played guitar with Chenier, the King of Zydeco, but now Chenier was issuing him a challenge.

"He wanted me to play with him regularly," remembers Hypolite. "I'd told him before, I didn't think so, but he kept after me. That day he said, 'You feel like you want to play some music? Then you've got to go out and get it if you want to make it.'"

More than two decades later, those words speak volumes for Hypolite. After heeding Chenier's call and playing with the zydeco legend until his passing, and more recently touring and recording with Clifton's son, C.J. Chenier, 63-year-old Hypolite is moving from the shadows to the spotlight. Louisiana Country Boy is his debut release, a moving testament to the power of faith and conviction.

"Nobody gave me a chance before," he notes. "But I said, 'I'm going to show 'em what I can do.' For me, this comes deep down in my soul. I want to play the blues, and I want to tell people about my Creole heritage."

Although he toured the world with the Cheniers, Hypolite's heart has always been in south Louisiana. He was born in St. Martinville on April 19, 1937, and the landscape was literally in his blood. As a boy, he picked cotton, okra and sweet potatoes, and worked the rice and sugar cane fields. Shoes were considered a luxury, and a grueling day in the brutal summer sun might net 75 cents and a plate of potatoes on a good day. The struggle was magnified when his mother died while he was young. "I had hard times coming up," he says. "I never forget where I came from."

Music became an outlet for him, and he started buying records by artists like B.B. King, T-Bone Walker, Muddy Waters and Clarence "Gatemouth" Brown. He taught himself to play, but he wasn't just learning by copying the licks off 45-RPM records. St. Martinville was home to the Dew Drop Inn, a popular juke joint on the chitlin circuit (and no relation to the famed New Orleans nightspot), and Hypolite took a job there.

"I used to stack up those soda water cases made out of wood and then stand up on 'em outside and watch the guys playing inside," he remembers. "I got to see T-Bone [Walker] and Gatemouth [Brown], Albert King, Albert Collins. I got to see Guitar Slim many times. Lord have mercy, thinking about 'The Things (I Used to Do)' brings me way back, when I was a young kid. I knew this was a song that would never be forgotten, and I've been having it in my mind to do it again. I saw Slim many times, always in those colorful clothes ' red, green yellow, purple."

The stamp of those formative years is all over Louisiana Country Boy. Like his peers Gatemouth Brown, Lonnie Brooks and Phillip Walker, Hypolite's guitar playing sings with the influence of the Gulf Coast, blending sweet single-note runs as wide open as Texas with greasier, syncopated licks cooked up for Louisiana swamp grooves. He takes a no-nonsense approach to playing zydeco and the blues.

"Zydeco is simple music," muses Hypolite. "Guys who try to play jazz and put big chords in zydeco make it hard on themselves. You just need to know how to phrase it right, and it has to have a feeling and a meaning to it."

Hypolite does just that on this recording by honoring Clifton Chenier with fresh versions of four songs from the King of Zydeco. He also pays homage to early blues inspirations. "Big Bad Girl" takes a cue from the school of slurred Jimmy Reed chords, and the brooding intro to "Someday" recalls the Fenton Robinson classic "Somebody Loan Me a Dime."

And as the album's title track reveals, Hypolite has bottled pure emotion by writing and singing autobiographical songs that reach all the way back to his childhood. He's been waiting for this moment for so long, played it over in his head so many times, that almost every song on this recording was done in one take, with no lyric sheets. On "Colinda," "You Used to Call Me" and "Hog for You Baby," Hypolite honors his heritage by warmly phrasing in Creole French. Three of the songs ' "For Better or Worse," "Big Bad Girl" and "Louisiana Country Boy" ' Harry improvised on the spot.

"My mind is like a computer," he says. "All these things that are on my mind, all the things I want to say, I could never forget. It's not a record where you go piece by piece. You've got to go straight up."

At a time when many blues artists are at the twilight of their careers, it's the dawn of Harry Hypolite's time in the sun. "This is like a dream for me," he says. "I'm proud of this record, and I've got plenty more tunes that I can do and that I think people are going to like. This is just the beginning."