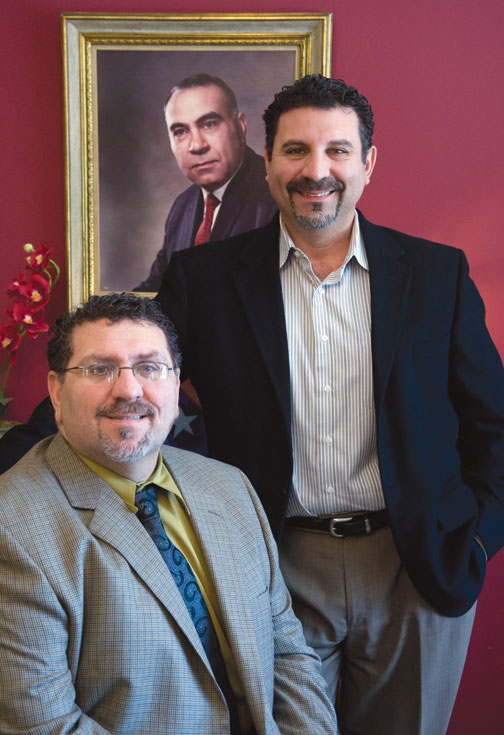 Mo and Nicol Hannie with a portrait of their father, Dr. Edward Hannie

Sixteen years ago, Mo and his brother, Nicol, opened Rosewood Retirement & Assisted Living at 203 Rue Fountaine on the south side of Lafayette. Their father, Dr. Edward Hannie, a dentist, moved into a two-bedroom, two-bathroom unit when Rosewood opened. "My dad was really the inspiration for it," Mo says.
Gradually, Nicol, who runs Rosewood, started noticing subtle changes in his father.

Mo noticed them, too. "His mood changed, his eating habits changed, he didn't go anywhere and he had some depression," Mo says. "He got really agitated easily."

At the age of 81, Dr. Hannie was diagnosed with early-stage dementia. He was placed on medications to slow the process of this incurable condition. About a year later, the brothers' mother, Jeanette Deraney, who was divorced from their father, had a stroke and also moved into Rosewood.

As Dr. Hannie's condition progressed into Alzheimer's, Mo started researching the disease. "I was really trying to understand what Alzheimer's is, because it's not a one-size-fits-all deal," Mo says.

In 2011, an estimated 5.4 million Americans had Alzheimer's disease. As the number of older citizens grows, the incidence of new and existing cases of Alzehimer's and other forms of dementia will also increase. Statistics show that one in eight people aged 65 and older and nearly half of those aged 85 and older have Alzheimer's disease - the sixth-leading cause of death in the U.S. for all ages, and the fifth-leading cause for those aged 65 and older. For Louisiana, the percentage of Alzheimer's victims aged 65 and older increased almost 14 percent from 2000 to 2010, with 73,000 people suffering from the disease. It is expected to increase 37 percent by 2025, when approximately 100,000 people in Louisiana will have Alzheimer's, according to the Alzheimer's Association. Approximately 51,000 of those will be 75-84, 46,000 will be 85 and older, and 7,000 will be 65-74.

At the time of Dr. Hannie's diagnosis, there was no facility in Lafayette dedicated to Alzheimer's patients. "Over the years, my brother and I have visited different places, and we've found that there are a lot of places in Lafayette that mix assisted living, Alzheimer's and nursing care," Hannie says. "And, we've found not mixing is better for them, especially for the independent assisted living residents, because they don't want to see what they might end up being years from now."

Two years before Dr. Hannie's death, Mo and Nicol talked about building an Alzheimer's facility with long-time friend Jeff Elmore, who had lost both of his maternal grandparents to Alzheimer's. At Dr. Hannie's funeral, Elmore and the Hannie brothers decided that the time was right. "After my dad passed away, I just said, I'm going to do it,'" Mo recalls.

In November 2011, Mo Hannie and Elmore purchased property on Beadle Road for the planned freestanding Alzheimer's facility, Personal Memory Care. "We are trying to get away from the institutional name," Mo explains. "You are going to drive by and say, This looks like a house.'"  Mo is working with Seattle-based architect John Shoesmith, who specializes in designing supportive living models for those with memory loss and other health conditions. Through this process, Mo has learned a lot about how different elements affect people with Alzheimer's. "Lighting and colors of the walls, for instance, have a lot to with your mood," he explains. "All of these things go into an Alzheimer's design, because you want to eliminate those things that end up agitating a person with Alzheimer's. So, that's what Shoesmith is bringing to the table, is the knowledge of what reduces anxiety and depression, and helps functionality of the facility."

The proposed one-story, 15,000-square-foot facility will have 22 units for lease. From the outside, the building will resemble a private home. Out front will be a circular drive and fountains. Inside, the units will overlook an atrium and have a common area with chandeliers, a grand piano and coffee bar. Personal Memory Care will offer three meals daily, maid service, laundry facilities, scheduled activities and transportation.

Personal Memory Care will be simple in design to avoid confusion for dementia patients. "The architectural firm has stressed that it should have as few turns as possible, especially when the patients have Alzheimer's, because of the memory impairment," Mo says.

The facility will have exercise rooms and offer mind-stimulating activities. Staff will be on-hand to supervise and interact with residents. "You can't prevent Alzheimer's, but there are non-medical ways to keep your mind sharp," Mo explains. Residents will have emergency call buttons, and nurses' aides will be onsite 24 hours a day.

Eventually, the Hannie brothers would like to add an adult day care next to the Alzheimer's facility. "This is something that I really am interested in doing, and we have the room there on the property to do it," Mo says. "This would allow someone to come, have meals, partake in exercises and do outings - just having some people to hang around with that are their own age, and are not just in a house with a sitter."

Elmore says that the partners' goal is to be "the first to open the only [dedicated] Alzheimer's and dementia facility in the area."

In the future, Mo would like to expand the model beyond Lafayette. "What I would like to do, hopefully, is to get it right the first time, layout-wise and so forth, and be able to do a bunch of different ones," he says. "Then, take the same footprint, and go where it's needed."