On Saturday, January 14th, Louisiana's Ragin' Cajuns Head Coach Mark Hudspeth will make a public appearance and autograph signing at Brother's on the Boulevard in Lafayette. This public appearance and signing marks the first opportunity the general public will have to meet with Coach Hudspeth since he led Louisiana's Ragin' Cajuns to a 32-30 win at the 2011 R+L Carriers New Orleans Bowl in December.

"This appearance gives us an opportunity to thank Coach for everything he's done for our team, our university and our community," said Tonia LaJaunie of Lafayette.
Brother's on the Boulevard is located at 101 Arnould Boulevard in Lafayette. Store hours on Saturday, January 14th are from 9:00am to 6:00pm. The public appearance and signing event will begin at 11:00am and end at 1:00pm.

No purchase is necessary to attend and participate in the signing. Brother's on the Boulevard will be providing a complimentary photo for attendees to have signed by Coach Hudspeth. Attendees are allowed to bring one additional item with them to have signed. UL clothing and merchandise will also be available.

About Mark Hudspeth Mark Hudspeth, a native of Louisville, Mississippi, is the head football coach at the University of Louisiana at Lafayette. As a player, Hudspeth was a four-year football letterman at Delta State University. Before becoming the Head Coach for Louisiana's Ragin' Cajuns, Hudspeth was an assistant coach (Wide Receivers and Passing Game Coordinator) at Mississippi State under head coach Dan Mullen. Prior to being at Mississippi State, Hudspeth was Head Coach at the University of North Alabama, a member of the Gulf South Conference in NCAA
Division II. In his first season as Louisiana's Ragin' Cajuns Head Coach, Hudspeth led the team to an 8-4 record and a winning trip to the 2011 R+L Carriers New Orleans Bowl, the school's first bowl in 41 years. 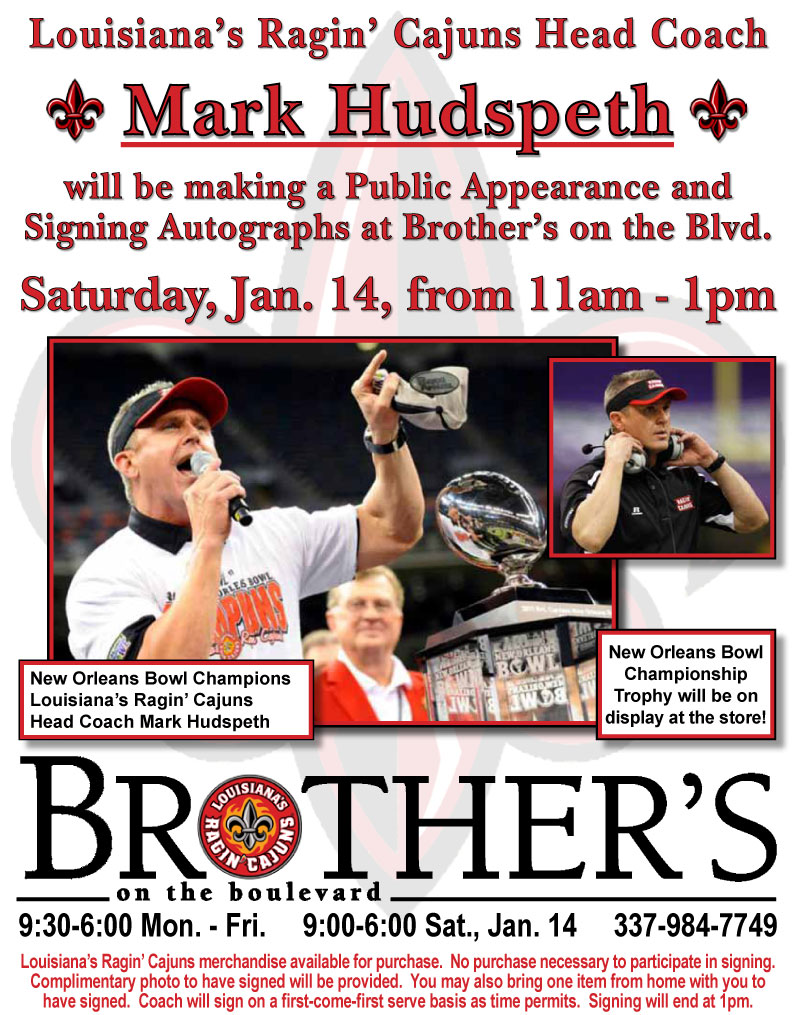