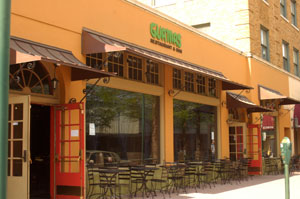 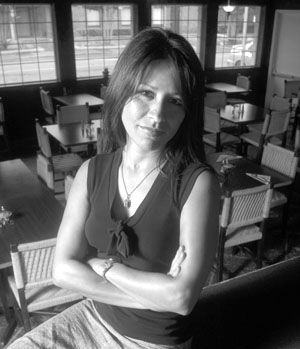 On the evening of Friday, April 8, Regina Baker marked her one-year anniversary as a contract security guard at the senior citizens' Evangeline Apartments on Jefferson Street. Baker regularly interacts with Lafayette police officers while on duty, and has a deep respect for the policemen who patrol downtown on the strip's busy weekend nights. She never could have imagined the scene she watched unfold that Friday night, as a group of cops beat up Guamas restaurant owner Rubens Mesa, smashing his head into a light pole and repeatedly kicking and hitting him.

"This was totally shocking because I've never seen anything like that before," Baker says. "I've never seen someone get beat like that, ever. He just didn't deserve that."

Baker's eight-hour shift was uneventful up to that point, as she made her hourly checks inside of the building. Around 12:30 a.m., she made a check outside the building and started talking to 69-year-old tenant John Boutte, who often sits underneath the apartment complex's awning on the Jefferson Street sidewalk.

As the pair made small talk, they watched a dispute unfold in front of neighboring Guamas restaurant involving two policemen. Sgt. Dwayne Prejean and officer Michael Boutte were reportedly following recent department directions to enforce an old state law for "obstructing public passages" that forbids some downtown bars and restaurants from serving patrons at tables on the sidewalk outside their building.

After Guamas' management resisted moving its tables inside, one customer, Tyler Guilbeau, made a remark that the police had nothing better to do than harass businesses about their al fresco tables. Guilbeau was arrested for disturbing the peace.

His arrest upset several members of Guamas' staff who were friends of Guilbeau's and felt his arrest was unreasonable, including owners Rubens Mesa and Julieta Tarazona. Baker says she heard Tarazona say, "It's a free country, and you can't even say a comment and they're going to arrest you."

Baker walked up within 12 feet of the officers, and she and Boutte say they saw Tarazona approach the policemen, who were standing near the corner of Vine and Jefferson streets in front of the Evangeline Apartments. Mesa also came out to check on Tarazona, his wife. Tarazona said something to the police, and then she and Mesa turned around and began walking back to the restaurant. "Then the cop said, 'You're under arrest,' and went and grabbed [Tarazona]," Baker says.

"It happened so quick," says Boutte. "I don't know what that lady could have done." Police charged Tarazona with remaining after forbidden and disturbing the peace.

According to witnesses, after his wife's arrest, Mesa turned and questioned the police. "Mr. Mesa's standing right there, and he turns around and says, 'What's going on?'" Baker says. "He's standing there and then four cops rush him, and they throw him up against the lamppost right there, and they're holding him." Baker says one of the officers pushed Mesa by his chin and slammed the back of his head against the tall green lamppost on the corner of Jefferson and Vine streets and then forced him to the ground.

Baker says the police pinned Mesa face down on the ground and began beating him while his wife, in handcuffs and on her knees, looked on screaming, "You see this! You see this!"

Lafayette Police Department Public Information Officer Mark Francis tells a different version of the story. He says that both Mesa and Tarazona were drunk and using foul language, and Mesa pushed one of the police officers. "You don't just strike a police officer, and go about your business," Francis says. "The guy struck a police officer and he was taken to the ground, and he received some injuries in the process of being arrested. It's so unfortunate that the individuals involved would choose to take on the officers in an intoxicated state." (Francis refused to say whether Mesa and Tarazona were given sobriety tests before or after their arrests.)

Mesa was charged with remaining after forbidden, resisting an officer, disturbing the peace, battery of a police officer and obstructing public passages.

However, Baker and Boutte say they never saw Mesa push or strike an officer. "He did not have time," says Baker. "They rushed him, threw him up against the post and then they just fell to the ground and start wailing on him. He didn't resist, and I've seen people [who did] resist before and they didn't do to them what they did to [Mesa]."

Boutte also witnessed what he says was excessive force by the police. "They were really beating [Mesa], and he kept hollering, 'What have I done? What have I done?'" Boutte says. Other witnesses, including several members of Guamas' staff, at least one of whom reportedly took pictures of the altercation with a cell phone, all declined to comment. Tarazona and Mesa also refused comment.

"[The police officers] were all on top of him," Boutte says. "I don't know if he had a chance to raise his hand, but they were really beating him. I was crying so much because I felt so sorry for that man. I know his face was bloody when they did pick him up to put him in one of the cars."

Baker's boyfriend, who requested anonymity for this story because he has family members in the police department, says he had just ordered a beer at Froggy's bar across the street when he saw the flashing police lights outside. When he walked outside to see what was happening, he also saw police officers slam Mesa against the light post and then take him down and beat him.

"There was something really wrong with those cops," he says. "There's still people I know in the department who are really good people, and I doubt they'd ever do anything like that without a really good reason. But those few that were there that night, there was definitely something wrong with those cops. I saw no reason for them to beat that guy as brutally as they did. Their actions that night were that of mobsters, not police officers. One cop that was out there was very rude and hateful to everyone that was out there from the beginning. He was about to arrest anyone he came in contact with."

Baker says after the police beat Mesa for approximately five minutes, they quickly cleared the scene.

"It was crazy," she says. "Everybody was scared because then the cops were threatening to arrest everyone. A lot of the workers at Guamas, these people were outside and I was trying to help them to move. I told them to go somewhere else because I was afraid that they were going to arrest everybody out there, so then I went inside."

One of the most disturbing things Baker saw that night occurred after she went back inside the Evangeline Apartments building and looked out the window at the police officers still out on Vine Street.

"I was looking out the window and I saw the cops, and they were all laughing and high-fiving each other."

Francis maintains the officers' statements ' which are confidential ' support their actions against Mesa. "What I'm looking at, these guys did their job," Francis says. "A lot of times these people get intoxicated and believe they are above the police."

Baker and Boutte say neither Mesa nor Tarazona appeared to have been drinking. Lafayette Consolidated Government Chief Administrative Officer Dee Stanley says Maj. Les Jones told him about the incident three days later. Jones was filling in for Police Chief Randy Hundley, who was out of town at a conference during Friday night's altercation. Stanley says he has since requested more information from the police department, including how many officers were involved and what any photographs from the incident may show. "I want to find out details that might not be in the initial report," Stanley says.

Questions also remain concerning what initiated the quarrel between city police and Guamas. Three weeks ago, city officials took measurements of the outdoor dining areas for Jefferson Street restaurants (including Zeus Café, Antlers and Mello Joy). Guamas was the only establishment in violation of the public passageway law, since its property line does not extend into the sidewalk.

Francis says both Guamas' and 307 Downtown (which isn't classified as a restaurant) were warned in advance that police would be enforcing the state statute for obstructing public passages, a law dating back to 1976. The law states that "no person shall willfully obstruct the free, convenient and normal use of any public sidewalk," and offenders can be fined up to $500 and/or imprisoned for up to six months. The statute does not specify how much of a sidewalk must remain clear.

Robert Guercio, co-owner of 307 Downtown, says he complied with officers' orders to move his furniture inside but remains unclear about the ordinance's parameters. He says his tables have sat outside for the past two years, and he has never been told he was in violation of any law.

"They obviously had a reason to ask us to move our tables and chairs inside off the sidewalk, although it was not made clear to me what that reason was and I wasn't made aware this was pending," Guercio says.

Guercio did not see the altercation between Mesa and police, but did see Mesa being handcuffed and escorted to a police car. "From what I could see, he had a big gash across his forehead, a scrape along the side of his face that looked like what you would get from falling off a bike on the concrete, and he looked bruised," says Guercio.

Francis says police officials decided to enforce the public passageway law to help manage the increased traffic downtown. "There's a lot of stuff that's been on the books that we can use," Francis says. "And with the influx of traffic downtown ' both vehicle and pedestrian ' we have to utilize every resource to completely make sure everything is under control. Situations dictate the response by police. A lot of times there are minor things that we may not have a problem with, but there may come a time when we have to step it up and become a little more stern based on the situation."

Both 307 Downtown and Guamas have kept their tables outside since that Friday and have yet to hear any more from the police. Meanwhile, Stanley is organizing meetings with police, downtown business owners and city officials to try and reach an understanding on the issue. "We're very concerned about making sure that the quality of life downtown is protected and preserved," Stanley says, adding that the security concerns of the police department and the issue of maintaining a level playing field for all downtown businesses also need to be considered.

For now, a bigger concern is the black eye the local police may face with Mesa's court date slated for sometime in the next six months. Baker, her boyfriend, and Tyler Guilbeau, the first person to be arrested that evening, all say they will testify in court about what they saw that night.

Baker is trying not to let the incident affect her trust in local police. "I don't want to tarnish the whole Lafayette PD because that's wrong," Baker says. "Unfortunately, when something like this happens, all the police get blamed for it, and that's a shame. But I was scared that night of police officers, and I've never been scared of a cop before."