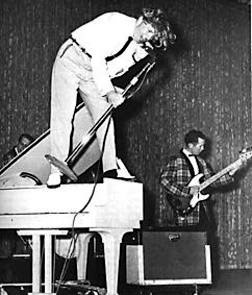 The Gospel of rock 'n' roll history holds that famed Louisiana rockabilly pioneer Jerry Lee Lewis cut his first record demo in 1954 at Sun Studios in Memphis. But an upcoming episode the History Channel's Cajun Pawn Stars is upsetting the conventional wisdom, revealing a recording Lewis made two years earlier at J&M Recording Studio in New Orleans - a recording that has evidently been authenticated by the Louisiana Music Hall of Fame's executive director and one that also suggests The Killer's earliest musical influence came from his exposure to the country and gospel music of his north Louisiana roots and the boogie woogie piano style of New Orleans more than the rockabilly he helped pioneer through his Memphis years. (Lewis is cousin to TV bible thumper Jimmy Swaggert and country musician Mickey Gilley.)

The recording was brought to Silver Dollar Pawn in Alexandria, site of the reality TV series, by Lewis' longtime friend and brother-in-law, Cecil Harrison, who wanted $100,000 for it. In an episode that aired Sunday evening, the pawn shop's owner, Jimmie DeRamus, held firm at $45,000 (the record was  appraised on the show at $15,000 to $20,000), and the two men couldn't reach an accord.

Read more about the recording here.