A heated on-air altercation at local country radio station KXKC shocked local listeners, but it's the story behind the incident that's really sickening. 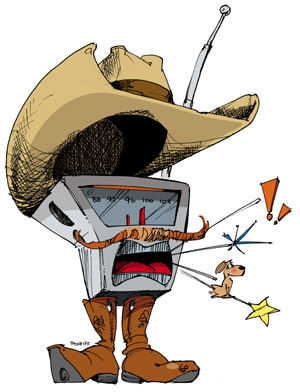 Mornings are mild at Acadiana country radio station KXKC. In between country favorites like Kenny Chesney's feel-good "When the Sun Goes Down" and Tim McGraw's poignant "If You're Reading This," a tribute to the families of soldiers who have died, morning show hosts Scott Daniels and Casey Carter ' "The Breakfast Flakes" ' engage in innocuous banter befitting a country radio station in a conservative market.

The segment started out innocently enough, with Daniels asking Langlinais if she hunts or fishes. Then the conversation took a decidedly creepy turn, as Daniels intimated that the unmarried Langlinais is pregnant, leading Carter to ask why he's spreading rumors. It degenerated quickly from there, with Carter claiming that Daniels constantly touches Langlinais with his feet:

Langlinais: "What do I do that's a spoiled, rotten little bi---?"

Langlinais: "Maybe you haven't done it in months, but you know you've done it a lot before that. ... Everything that you do just starts to aggravate me, and I can't hold it in anymore, I mean my goodness gracious. It's f---ing aggravating, and then you're gonna say it's all me? ... He's the f---ing asshole, and he doesn't shut up, and he's going spreading all these f---ing rumors about me, and it's really getting me. ... I'm sick of it. I had enough."

The first rule of damage control: make a public apology. Within hours, the station's Web site, www.kxkc.com, posted an open letter from Carter:

"On behalf of Scott Daniels, DeLannie Langlinais, and the entire staff of 99.1 KXKC, I'd like to apologize for what aired this morning shortly after 7 a.m. during the "Scott and Casey in the Morning" program. Please know that at KXKC, we strive to be a radio station that everyone in the family can listen toâ?¦ everyone from your kids all the way up to your great-grandparentsâ?¦ and what was said this morning is not a good representation of the otherwise strong morals and values held by KXKC. I personally am quite disappointed that both Scott and DeLannie would do anything that would result in hurting the integrity of the radio station that we have all worked so hard to build. I strongly feel that this is not the way the number one Country station in Acadiana (or ANYWHERE, for that matter) should represent itself and please know that this matter is actively being dealt with. At this time, I feel confident in saying that nothing of this nature will ever happen again.

"As you heard this morning, DeLannie did indeed resign her position as our Morning Show Producer. The search is on for her replacement and, while she does leave behind some big shoes to fill, we will be thorough in our search until we find exactly the right replacement.

"I have received many emails over the past few hours from a lot of you. Some of you are disgusted in what you heard and, frankly, I can't say I blame you. I can only hope that you will forgive us and continue to start your day with Scott and I each and every morning. Believe it or not, I have also received several emails asking if we can play the audio again (apparently some of you were amused by this. To each his own, right?!?!). The answer to that is NO. This is not something that belongs on the air.

"However, to appease those of you who want to hear this again or may have missed it and want to hear what all of the confusion is about, you can access the KXKC audio archives by clicking here. PLEASE be warned that this contains mature language.

"If there is a bright side to all of this, it gave us the opportunity to test out our new delay and our "bleeping" system that was recently installed in the studio. THANK GOODNESS it all operated the way it is supposed to. Whew!

The second rule of damage control: never do anything that inflames the situation and causes further embarrassment. But Carter ignored that rule and directly provided listeners with a perfectly edited audio file to the on-air brawl, letting people hear two broadcasters engaged in an expletive-laden shouting match.

By Friday, both the letter and link were removed from the front page of the Web site, and Daniels issued a groveling apology on the air that morning, saying he'd lost his temper and he regretted the "dark cloud" he put over the station ' while also noting that they'd just landed the No. 1 spot in local ratings. That afternoon and over the weekend, Daniels was doing remote broadcasts for advertisers as if nothing had ever happened.

So many things about the incident don't add up: Veteran broadcaster Daniels screaming obscenities for an extended period of time over the air; a co-host who pleads to take an argument off-air but is somehow powerless to do so; a young producer who dramatically quits; the perfectly placed "bleeps" over the obscenities; and the radio station providing listeners with an audio link to the whole debacle on its Web site. The Independent Weekly wasn't the only organization to suspect there was more here than meets the ear.

"It's a publicity stunt, and what's surprising is that the Arbitron ratings haven't started yet," says Todd Elliot, program director for Pittman Broadcasting-owned KVOL 1330 AM and the host of radio programs FYI Acadiana and the Lafayette Power Luncheon. "Usually when you do something like this, it's on the day the Arbitron ratings diary begins. They actually jumped it by three weeks, but I guess they're hoping to ride out the controversy and get people talking. I think they're a sham, and I think they should be found out," Elliot adds.

Arbitron, the national company that surveys local listening habits, released its latest ratings in early August, putting Scott and Casey in the Morning in solid but distant second place behind KTDY, an adult contemporary station. In the overall ratings, KXKC is tied with country competitor KMDL, a Regent Broadcasting station, for third place. The next survey of local listening habits is Sept. 20 to Dec. 12.

Upset at KXKC's deception, Elliot began to rag on the morning show on his own radio show around 11 a.m. Thursday. "They've had a want ad on a radio industry service called All Access, which is for radio people, for a couple of months for that position of the girl who supposedly quit on air," says Elliot. He says the ad appeared on allaccess.com. On July 17, another want ad signed by Carter was posted on the Web site theprovoice.com, seeking a producer for the morning show.

"They were clearly looking for a new producer," Elliot says, "but they wanted to go out with a bang, a controversy. They knew they could do that, cause some drama and some stir before the ratings. Can they do that? Did they do that? Yeah, I certainly believe they did for the mere value of shock and controversy and ratings."

KLFY-TV10 General Manager Mike Barras was also not amused; he announced in an online story that his television station was reviewing its relationship with KXKC. The television station provides weather and news bites to the radio station. "I couldn't believe what I heard," Barras says. "I think things got out of hand."

"Those involved thought it was humorous," surmises competitor Mike Grimsley, who runs Regent Broadcasting's seven area stations. "And I'm sure they all met that afternoon to figure out what could have been done differently."

Lafayette radio reps can't imagine that any local manager would have approved this kind of content. "I'd have known about it before, or the final result would have been that they don't work here," Grimsley says. "I think in my company, somebody would have [been fired]."

Federal law prohibits the airing of obscene programming at any time and indecent programming or profane language during certain hours. The Federal Communications Commission, which enforces these laws, can revoke a station's license, impose a monetary forfeiture or issue a warning. The "bleeping" system Carter touts in her letter would likely protect KXKC from any such FCC actions.

Elliot was struck by the tones over the obscenities, the same bleeps listeners heard in the on-air incident. "Nobody speaks in bleeps," Elliot says. "They planned this, and this was just a big hoax. There's no such thing as a bleeping system. Nobody can be bleeped on the air."

While radio stations do have a seven-second delay that allows a station to monitor and circumvent on-air obscenities from jocks and callers, "bleeping" doesn't factor into the equation. Elliot's control room has what's called a "dump button" that can interrupt programming for up to seven seconds and then rejoin the ongoing programming. But he says it would not dub in the tones found on KXKC's phony on-air meltdown. "What I think they did was that they recorded it the day before," he says. "They rehearsed it."

Barras, whose TV station initially posted the audio with its online story, says that in connection with KXKC's request that he remove the audio link from KLFY's Web site, the radio station confirmed to him that the incident was a publicity stunt.