Lesson No. 3 in The Armed Robber's Manual: Don't lock the keys in the getaway car. 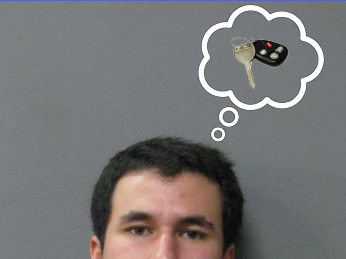 Clearly this is a photo illustration

A Maurice man is behind bars on an armed robbery charge after police say he locked his keys in his car before robbing a Kaliste Saloom convenience store. Nathan Sonnier, 28, is being held on a $125,000 bond. According to police, Sonnier used a gun to rob the clerk of cash, cigarettes and a beverages, but was spotted later in a nearby parking lot waiting for his mother to bring him a spare key. A Lafayette Police spokesman says Sonnier was identified by surveillance video, and a search uncovered the weapon, cash and purloined products.