The Downtown Development Authority hopes a new 30-unit condo project on Jefferson Street from developer Cecil Trahan will be the first of many residential concepts downtown. 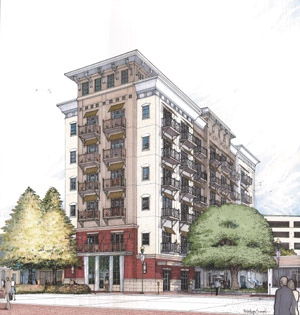 It's been a gradual process, but downtown Lafayette is finally starting to attract some of the business viewed as critical to its overall growth: residential development.

"It does a lot of things," says Downtown Development Authority Director Cathy Webre. "It allows us to have that balance with business and commerce so downtown can actually operate as a neighborhood."

Growing a solidified residential community downtown may still be years away, but new construction that will greatly expand downtown residential offerings is about to break ground. The first major new development is a $6.3 million, six-story, upscale condo complex in the 500 block of Jefferson Street. The complex will house a lobby, retail space and a food court on the building's first floor, beneath five floors of residential condos, and will be located in the empty lot between City News Stand and the small, gated park that leads into the Vermilion Street parking garage. Trahan is still working out issues regarding renovations to the city-owned park but plans to begin construction sometime this summer, once he has pre-sold enough condo units.

Trahan's development will contain 30 condo lofts, including both 700-square-foot one-bedroom units and 1,340-square-foot two bedroom units. Tenants will have an array of high-end amenities, including high-speed Internet connections, an exercise room and a rooftop pool adjoining a kitchen and lounge area. Preliminary prices for the lofts run from $210,000 to $359,000.

In marketing his development, Trahan has promoted downtown's access to the Acadiana Center for the Arts, as well as several galleries, parks and entertainment venues. "Our marketing started the weekend of Festival International," he says. "We've had great response ' with several reserved."

Webre hopes Trahan's condo project is the first of many similar developments.

"Residential growth in downtown, at this juncture, is probably going to come from new construction on [vacant] lots," she says. "So this can kind of be a 'show me' project in the sense that if it's successful, it can help catalyze and stimulate other projects."

DDA is promoting the development of new, mixed-use buildings, like Trahan's, which house both retail and residential space. In addition to Trahan's development, Weber says that local developer Jeffery Reddoch, who owns the Jefferson Street building behind Whitney Bank close to the Johnston Street intersection, is considering developing a mixed commercial-residential project. Greg Walls, a local builder who just bought the vacant lot on the corner of St. John and Convent, also is entertaining the idea of a residential development. Attorney Jeff Speer is considering developing condos on top of the Hilton Homewood Suites hotel he is planning adjacent to the federal courthouse. And Weber says DDA also is pushing the mixed-use concept on a few out-of-state companies that have expressed interest in the former Daily Advertiser building on Jefferson Street.

Just how many people, and at what price, will be attracted to living downtown remains to be seen. The results of a DDA-commissioned marketing survey are due in July, and DDA hopes that will answer those questions for developers.

Bill Bacqué, CEO of Lafayette real estate firm Van Eaton & Romero, believes positive survey results could persuade real estate investors that downtown is a safe bet. "When you do these marketing feasibility studies," he says, "the basic purpose is to look into the crystal ball and say, 'Is this something that's viable for future development?'" Bacque says developers have typically forsaken downtown in the past for more guaranteed markets, but "there's been enough investment in downtown to make it now attractive as a potential opportunity." He envisions young professionals wanting to live in the area, but families or older couples might be dissuaded by the lack of a nearby grocery store and the proliferation of downtown bars.

"My gut feeling tells me that there is going to be some amount of demand for downtown living space," Bacqué continues. "How broad that demand is going to be and how durable it's going to be, I think, are going to be dependent on some other factors."

Webre notes that studies have shown downtown areas nationwide are attracting both young professionals and retiring baby boomers ' both of which find a low-maintenance, pedestrian-friendly environment very appealing. "It's both ends of the spectrum," Webre says. She adds that because of downtown's close proximity to the university, UL Lafayette President Ray Authement has contacted DDA about his interest in having some downtown living spaces for both faculty and students.

A significant residential component downtown has always been a part of DDA's goals set forth in a 1989 master plan. A lack of available building space has made it a slow process. "There probably have been other downtowns in which the residential component has maybe come a little bit sooner," Webre says. "We didn't necessarily have the building inventory to have the rapid conversion into residential development."

"We have to do it backwards," Bacqué notes. "It's not like New Orleans, or large metropolitan areas where you could go into a lot of existing and attractive old facilities and retrofit them into living units. We just never had that infrastructure. That's what's happened first in most other urban areas, and then after getting those residents established, then you come in with new developments."

Downtown living spaces in Lafayette have always been rare. In 1995, the Evangeline Apartments opened 86 units for seniors. Outside of the Evangeline, there are a total of 12 residential spaces within the downtown Central Business District.

People told Teche Drugs owner Tom Day that he was crazy when he developed six residential lofts in the space above his drugstore and gift shop on Jefferson Street in the early '90s. "And I was crazy," he says. "I wish I would have put in more apartments and less retail space." Day has never advertised for tenants and keeps a waiting list of people who have inquired about the spacious apartments.

"Downtown there's always something going on," Day says. "It's lively. There's something going on from 5 o'clock in the morning till 2 o'clock in the morning. So you might be bored for three hours, but there's always something to do, people to see. And the security downtown has gotten so much better than it used to be. If I had a choice of moving into a luxury apartment downtown versus a luxury apartment out at River Ranch or somewhere out in the boondocks, well, heck yeah I'd pick downtown."