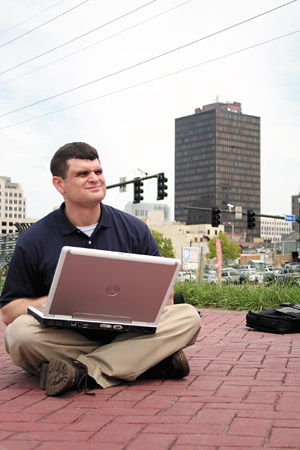 When The Washington Times wanted an assessment of Gov. Kathleen Blanco's popularity last month, the newspaper skipped right over the state's usual talking heads and turned directly to Chad Rogers, publisher of TheDeadPelican.com. He told the Times that Blanco's reputation had been tarnished by Hurricane Katrina and she was putting on a "tough guy act" for Louisiana's voters.

So who exactly is this Rogers character and what gives him the right to weigh in like that in a national publication? Does he have a political science degree? Nope; he's actually a former English composition teacher at L.E. Fletcher Technical Community College in Houma. Has he been covering politics as a journalist for decades, publishing related titles along the way? Not exactly; he only formed his Web site less than two years ago.

But the Denham Springs resident can point to a single credential that substantiates his inclusion in the article: More than 8,000 visitors browse news and commentary on his Web site each day, according to Rogers' count. The figure is representative of a trend that has been growing since the late '90s, and Dead Pelican seems to be firmly planted on the cresting wave. Sites dedicated to Louisiana politics have been sprouting up regularly, and based on forum comments and media coverage, there is a hungry audience. In many ways, it's the second coming of Project Gutenberg, as far as access to information. A recent study by the Pew Research Center found there are more than 75 million U.S. citizens regularly accessing or creating political information on the Internet.

"The Internet is the ultimate concept of freedom," Rogers says. "It is very American. You don't have to be a journalist to put out news and opinion. If you put it out there and people like it, you'll be successful. Your only limitation is the audience you can build. The Internet has created a thirst for information at lightning-fast speed, and this fills a void."

Mainstream media has been embracing some of the same guerilla tactics that have made the political sites popular, says C.B. Forgotston Jr., a Hammond attorney who posts blistering political commentary on Forgotston.com. Many newspapers are creating their own blogs or adding outside bloggers to their newspapers' Web sites. "The papers themselves are becoming bloggers and they are posting online," Forgotston says. "Whether we were all part of starting that, I don't know. But we are not moving to print. We are staying electronic, and print is moving toward us."

All the Louisiana political sites offer something different. For instance, Forgotston, whose subscribers number in the thousands, is well-known for compiling legislative voting records on gambling and taxes. Also, as former chief counsel for the House Appropriations Committee, Forgotston is an expert on most state fiscal matters. Dead Pelican, a knock-off of DrudgeReport.com, offers a simple format and thrives on breaking original news, although Rogers can play fast and loose with reports at times ' just last week, he wrote that Insurance Commissioner Jim Donelon was under investigation by the Federal Bureau of Investigation but didn't name his sources for the story. Other sites rely heavily on forums, where users can communicate directly or on e-mail lists to disburse information.

Every purveyor of this alternative news source seems to have a love-hate relationship with the mainstream media. Nearly all of them depend on mainstream news for content; major stories are highlighted and commented on; inconsistencies are pointed out and partisan shots are fired.

The media, on the other hand, isn't shy about tapping these "kooks" ' a label coined by former Gov. Mike Foster and embraced by the alternative media ' for input. And when it happens, the news travels quickly within this tight-knit community of bloggers.

Forgotston has been interviewed on several occasions by The New York Times and was recently quoted in an editorial by WAFB-TV in Baton Rouge. Moon Griffon, who hosts a syndicated statewide radio show, was also interviewed on cable news giant MSNBC a few weeks ago. When asked about President Bush's visit to New Orleans on the anniversary of Katrina, conservative Griffon flipped the question and schooled the national media on the "real problems" being created by state and local governments back home ' also known as the "good ol' boy network," he told MSNBC.

It's no wonder why some in the mainstream media love these alternative sources. A study conducted during the 2004 presidential election by Intelliseek, a technology solutions company based in Ohio, found that bloggers often kept major news items alive on their Web sites until the mainstream media caught up with them. The Internet's influence on political discussions and that election is evident, says company CMO Pete Blackshaw.

"The web-enabled public is relying on a variety of sources, including blogs, traditional media and other Web sites, to inform themselves, find unfiltered opinions, and to guide their votes," Blackshaw says. "And bloggers, in some instances, are pushing the envelope in defining the political agenda and news coverage."

In Louisiana, the now-defunct DeductBox.com is credited with starting it all in the late '90s, but the tradition is being carried on by Web sites like LaPoliticalNews.Blogspot.com, BayouBuzz.com and PoliticsLa.com. Even independent journalist John Maginnis, known nationally for his political reporting, has moved some of his writings online, as has former Insurance Commissioner Jim Brown. Emily Metzgar, a columnist for The Shreveport Times, also maintains a personal blog that is frequently linked to by other bloggers. And New Orleans bloggers have been relentless post-Katrina, excoriating all levels of government and posting deeply personal accounts of their experiences in the arduous recovery effort. They even organized a conference last month, dubbed "Rising Tide," that attracted roughly 40 bloggers and landed Wall Street Journal reporters and keynote speakers Christopher Cooper and Robert Block, authors of Disaster: Hurricane Katrina and the Failure of Homeland Security.

Rogers, who recently started making regular appearances on Baton Rouge television and running paid advertising on Dead Pelican, says there is only one goal: "The impact we're trying to make is to help people think a little more about what is going on in Louisiana, instead of just taking things at face value."

The approach might be raw and in-your-face, but it gets the job done, says Forgotston. The voting records he publishes on his Web site have helped challengers defeat incumbents, but now the challengers are upset because their own voting records are being disseminated. Forgotston wants to make a positive impact, and as long as someone in elected office is expressing anger over the alternative media, he's accomplishing that goal.

"I don't know if they respect us as much as fear us," he says, "but I consider that a badge of honor."

Chad Rogers' thedeadpelican.com Web site generates 8,000 visitors a day and recently landed him an interview with the Washington Times.