UL Lafayette's Sigma Nu fraternity was shut down in February. The pledge who sparked the investigation breaks his silence. 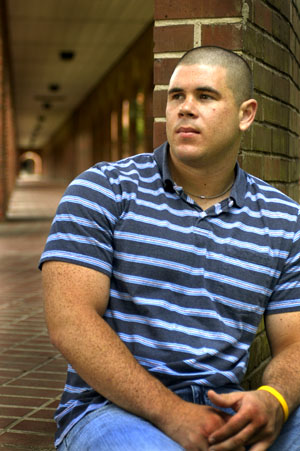 For Hell Week, it was brutally cold. Frost covered the ground in the early morning hours at a crawfish plant in St. Landry Parish last Dec. 14, and 21-year-old Lance Beal and more than 10 other pledges in Sigma Nu fraternity at UL Lafayette were shivering and covered in crawfish waste. Sigma Nu members had "kidnapped" the pledges from the fraternity house on campus — after withholding food from them — and took the pledge class to the remote location.

That night and morning in Whiteville, Sigma Nu members hit Beal and the additional pledges with bloodied dead nutria and forced them to drink large amounts of alcohol. Beer was also poured in the eyes of pledges who couldn't perform push-ups. The combination of the weather, exercise and lack of food and water was a recipe for hypothermia, dehydration and exhaustion.

"Some of these guys looked like skeletons, after not eating for a week," says Beal.

The weekend was the culmination of a pledging process that Beal says went far beyond fraternity hijinks. During homecoming week, Sigma Nu members forced two to three pledges at a time into a storage box located under a bed in the frat house. The box had little ventilation, and fraternity members sprayed aerosol cans into the box while keeping the pledges there for 30 minutes to an hour. Beal was an unwilling participant. "I got put in the crawl space once, and it took a few guys to get me in there," he remembers.

The 5-foot-10, 210-pound Beal has been a member of the Army National Guard for four years and is accustomed to physical tests and rigorous discipline drills. His father was a Sigma Nu, and the younger Beal pledged the fraternity in his senior year to make future contacts and hopefully further his career after graduation.

But when the pledges were finally taken back to the frat house after the Hell Week hazing, Beal had had enough. He told the Sigma Nu officers he was quitting and left the frat house — still covered in crawfish waste — to walk to a friend's house. Later that night, Beal told campus police officer Channing Credeur what happened at Sylvester's crawfish farm.

In early January, Beal met with UL Associate Dean Patricia Cottonham, assistant to Edward A. Pratt, the dean of students. Beal says Cottonham was receptive to his accounts of the hazing and pledged UL's full cooperation in any investigations relating to the incidents. But he says that wasn't the case when he met with Pratt.

"When I talked to Dean Pratt, he said, 'I'm not telling you what to do, but this is all going to blow over, and you'll get back to your normal life,'" says Beal. "He said, 'This is part of pledging. You don't want to make too many enemies. These guys are the future leaders of our community. One day people are going to say you turned your back on your buddies.' I said, 'These aren't my friends. Friends don't beat friends with dead animals.'"

"I'm not denying anything he said," Pratt says, "but I'd just like to get it in some kind of context as far as what the conversation was and where he felt that that was the message I tried to deliver. That's not my attitude about hazing. I am sorry if he misread that I was concerned about him and about the abuse that he had received. If I was trying to console him and he thought my focus was on the responsible parties and me trying to downplay that, I'm sorry. That was not my intention. I wanted us to be as aggressive as we could, and that doesn't fit my response at all."

The university was already aware of possible hazing problems at Sigma Nu; an anonymous tip was called into UL in December. (Beal says the tip did not come from him.) And after Beal's father contacted Sigma Nu alumni about his son's experience, the national chapter of the fraternity began investigating and shut the fraternity down in February. Sigma Nu is ineligible for active status at UL until 2008.

But Beal's unpleasant Sigma Nu experience continued in other ways. He started receiving death threats from fraternity members by telephone and became a target of harassment when he left his house. "If [Sigma Nu members] saw me anywhere, like Red's, they'd get on their cell phones and start calling people, and next thing I know there'd be 10 guys around me," says Beal. He reported the incidents to the Lafayette Police Department, who have responded to at least two confrontations involving Beal and fraternity members; Sigma Nu's Charles Minyard was cited for simple battery on Jan. 24. St. Landry Parish Police are also now investigating the December incidents at Sylvester's crawfish farm.

Beal decided to pursue criminal charges against fraternity members partly out of frustration with UL's investigation of Sigma Nu. Since he first went to Cottonham and Pratt in January, only two Sigma Nu appear to have received serious disciplinary action from the university. One Sigma Nu officer was expelled, and another was allowed to resign. Beal recently submitted documents to UL police that name more than a dozen students who participated in hazing.

"We certainly questioned everyone in the [fraternity] chapter," says Cottonham. "They all denied the version Lance had, even the new member class. We did get them to say that they took a trip and admit they were there. But it's very difficult to get anybody to come in and admit that they've done these kinds of things. We believe Lance and view him as the victim in all this, and that's why disciplinary action was taken."

Cottonham says approximately 25 Sigma Nu members were questioned in the investigation. University disciplinary records are confidential, but disciplinary action ranges from a verbal warning to suspension. Other possible actions include fines, probation and "decision-making" classes.

Such punishments appear lenient considering the state of Louisiana's strict anti-hazing laws. Louisiana statute R:S 17:1801 states, "Hazing in any form, or the use of any method of initiation into fraternal organizations in any educational institution supported wholly or in part by public funds, which is likely to cause bodily danger or physical punishment to any student or any other person attending any such institution is prohibited."

It also notes, "Whoever violates the provisions of this Section shall be fined not less than ten dollars nor more than one hundred dollars, or imprisoned for not less than ten days nor more than thirty days, or both, and in addition, shall be expelled from the educational institution and not permitted to return during the current session or term in which the violation occurs."

Since Beal pursued criminal charges in mid-May and supplied documentation to UL police, one arrest has been made. Campus police officer Channing Credeur was arrested on May 23 on charges of malfeasance in office for not reporting the hazing to the university. Cottonham says UL will reopen its Sigma Nu investigation if its investigation by campus police yields new information. "If there is something else that is determined about this, we'll certainly go back and take a look at this," she says. "Lance is the victim, and we won't forget that."

Beal leaves this week for the Army's officer training school in Fort McClellan, Ala. While he'd like to close this chapter of his college career, he says he's willing to offer further testimony about the Sigma Nu hazing to UL if necessary. "When I left [Sigma Nu], they made me feel like I was the guy doing something bad. But after two days, I realized, 'No, this is wrong. Somebody could have gotten killed out there.'"