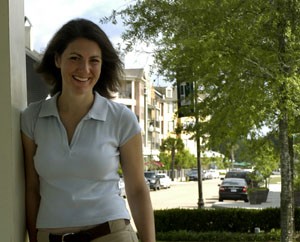 Lafayette native Leslie Barton sold organic vegetables at the Crescent City Farmers Market in New Orleans from 1996-1998, while working for Vintage Garden & Co., a Louisiana certified organic farm. She also traveled around Europe after graduating from LSU with a degree in horticulture and felt a connection with the outdoor markets overseas. After moving back to Lafayette in 2003, Barton kept thinking about her past experiences.

"The whole time I was here, I had the farmer's market in the back of my mind," the 30-year-old says. "I kept mulling it over." She finally developed an eight-page business plan that included everything from categories of vendors to eligibility requirements. When she approached River Ranch developer Robert Daigle with her idea, the timing was perfect.

"It's something we've been looking at for probably two years," he says. "Not only does she know the concept, she's helped set them up before."

The fruits of Barton's labor debut at 8 a.m. this Saturday, June 11, as Acadiana's organic farmers, herb growers and artists will set up shop in River Ranch's Town Square for the city's first full-scale farmer's market. Named City Garden Market, it will complement the Acadiana Farmer's Market on Dulles Drive, which runs Saturday mornings from 5 a.m.-10 p.m. year-round and exclusively sells produce. "It's probably going to help us," says Dulles market's David Richter. "A lot of people just need to be reminded of the farmer's markets."

The City Garden Market is much larger, with three times the number of vendors and a wider array of products offered. Barton's goal is to secure approximately 50 core vendors, with participants rotating depending on availability and season. She initially looked at downtown locations for the market, but says she chose River Ranch "because it has a captive audience."

Barton has been conducting market meetings every Monday at the City Club and also coordinating with Crescent City Farmers Market to prepare for this weekend's opening. After handing out applications and sampling products, Barton chose about 30 vendors for the first market. She asks that vendors individually find out what permits and licenses they need to sell their products, but the market is following the guidelines of Crescent City's handbook, From the Field to the Table, based on FDA and USDA regulations. The market itself has to be licensed by Lafayette Consolidated Government as a food fair, like Mardi Gras and local festivals.

"That's how Crescent City and Baton Rouge dealt with it," she says. At press time, the market licensing resolution was scheduled for a city council vote Tuesday, June 7. Both Daigle and Barton have met with City-Parish President Joey Durel to ask for support. "I haven't had any discussions with any of the council members, but I can't imagine it not going through," Durel says. "I think it's a good fit for any area of town."

The market is rain or shine, and several family farms, including Gautreaux Family Farm in Scott and Pasttime Farms in Kentwood, will be participating. Acadiana vendors will be selling everything from fresh herbs, planters and flowers, and lip balm to old-fashioned Creole foods like pig's ears and crawfish pistolettes.

Bob and Nicole Romero of Youngsville own Three Brothers Farms and will be selling bags of raw sugar and their homemade fig products (mostly preserves) at the market. The Romeros drive to New Orleans twice a month to sell at Crescent City Farmer's Market, and will use the other two weekends in the month to sell in Lafayette. "For us, the market is vital," Bob says. "It's what keeps us as a farm from going out of business." The Romeros have about 600 fig trees in Youngsville and are also starting to harvest sugar cane to make raw sugar.

Bob is planning to commit to the Lafayette market for two years and is impressed by Barton's plans. "There's a lot of little things Leslie's doing that are going to make her market healthy," he says. He cites rules such as not allowing early sales so that everyone gets a fair window to shop and also praises her for making the market family friendly. (Shoppers do have the option of becoming a Friend of the Market for a fee and receiving early admission and other benefits.) He does hope to see a board of directors created, so that farmers' best interests are kept in mind and is concerned about market plans for the off-season.

Currently, the market will be open eight months out of the year and closed January-February and August-September. If the demand is there, Barton plans to offer just produce and possibly open up a Wednesday market in the off months. Romero says he'd like to sell his canned products year-round and doesn't want to be left out during the off season.

"Everything's going to be based on demand," says Barton. "Everybody's going to have to be patient and let it work itself out."