The Philly cheesesteak is one of the best sandwiches in Acadiana. There is just no other way to say it.

If you've never had a Philly cheesesteak, no need to buy a plane ticket - head to Villager's Café In Maurice.

This sandwich is one of the best in Acadiana. There is just no other way to say it. Owner MaryBeth Broussard doesn't advertise, so the glory of her establishment is all word of mouth. In my case, my best friend began dating a native Mauricean who educated us on a sandwich worth driving half an hour in heavy traffic to get.

The original cheesesteak is made with Velveeta. Yeah, I know - pretty gross. Villager's and most other non-Philadelphia restaurants buck tradition and use a cheese that doesn't have 50 chemical ingredients, usually Provolone. Green bell peppers and onions are sautéed down and entwined with the meat, adding a bit of crunch and a heavenly marriage of flavor. Cheesesteaks are also served with au jus, which many restaurants forgo. Not Villager's. Its au jus leans toward gravy with a heavy body and thick, rich flavor. This cheesesteak is served as a poboy - $7.85 for the whole and $5.75 for the half. Just get the whole. For barely $2 more, it's always worth it. Also for what it's worth, my guest, a native New Orleanian, said this was the closest to a New Orleans poboy he's yet to have in Acadiana. 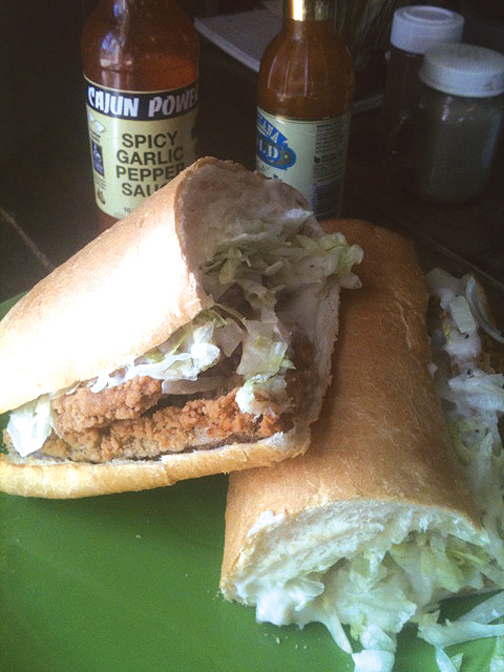 Normally the meat, in the effort to create a cozy crust, is overcooked to the point of shoe leather or the meat is tremendous but the breading tastes like Evangeline Maid Bread soaked in grease and clumped onto the flesh, hanging on for dear life. With Villager's, after half an hour of sitting in the poboy bread soaked with a luscious peppery white gravy and lettuce the chicken was just as delicious as ever.

The sweet potato fries came out before the sandwiches. I could have eaten the whole cheesesteak, but it's hard when presented with a huge plate of thickly cut sweet potato fries to sit back and be patient. The cinnamon sugar comes on the side so you can decide if you want to go sweet, salty or spicy - $4.25 for a plateful.
Broussard opened Villager's Café in 1997. Its location at 8400 Maurice Ave. on the town's main drag was the site of her video rental store. When DVDs came in, Broussard saw the writing on the wall and got out. Knowing she had to do something with the space, she had the impetus to start a restaurant. "I had no money so I made everything," says Broussard with a quick spank of the table. Wooden electrical spools were free and when given several glossy coats, some cut in two to make half tables to tuck under windows, the place becomes downright cozy. Antique tools decorate the walls and palettes are tacked to the wall, holding more décor.

Broussard says she wasn't an avid cook before. "My friends helped me come up with [the recipes]. I got my meatball recipe from one person, got this recipe from another," she explains.

The space is tiny and doesn't seat many. There is a small, beautiful porch mainly shaded from the sun, but for the Vitamin D deficient who languish in offices all day the porch is a respite. In fact, the whole interior is flooded with light.

It's tough to write about any eating establishment when the population of the town is smaller than a large high school - the words "quaint" and "adorable" pop up with alarming frequency. Broussard's place could fall into that. Instead, it seems like a labor of love. From the interior to the food you get the impression that hard work enjoyed is the best dish served.

The menu varies from poboys and platters to salads and desserts. Check out Villager's Café at villagerscafe.net or drive over to Maurice and look to your right.