Houston has proven itself to be downright neighborly, as the Houston Press gives Lafayette's cuisine a great review in connection with Southern Living's "Tastiest City in the South" contest. 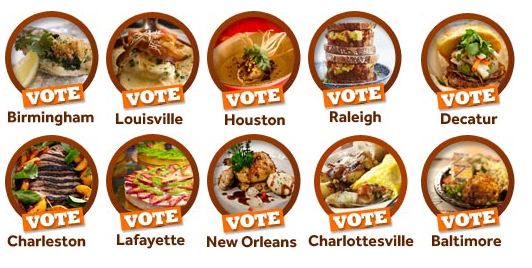 Houston has proven itself to be downright neighborly; Katharine Shilcutt of the Houston Press gives Lafayette's cuisine a great review in connection with Southern Living's "Tastiest City in the South" contest.

Your social media feeds have no doubt been littered with pleadings to vote for the Hub City as the South's best city for food. Many people, including this writer, have been using social media to make the case for those who love Lafayette taking one minute out of their January days to vote for our fair city. Sure, you have to fill out one of those insipid captchas, but it is a small price to pay for the collective benefit of the national exposure from Southern Living - the winning city is profiled in April's issue.

Currently competing against us are Houston, Nashville, Louisville, Baltimore, New Orleans, Decatur, Raleigh, Charlottesville and Birmingham. While we obviously have a huge chunk of boudin in our hearts reserved for New Orleans, it's been known as a food capital for quite some time.

Louisville is currently our biggest competitor, and as of this morning Lafayette is around 129,000 votes, about 4,000 votes ahead.

Shilcutt wastes no time in her review of Lafayette to address this issue: in the question of robovoting, or electronically padding the ballot box - how is a city like ours, so much smaller than others, getting so many votes? Well, it's a fair question and she isn't wrong to ask it. It does seem strange if you don't know our culture. We defend our food as vociferously as we eat it. Hopefully Lafayette's passion for food and the lengths to which its citizens will go to show it was proven to her.

So Shilcutt acted in a neighborly fashion, and upon hearing great things about Lafayette trotted over recently to see us. In the article posted here, she says, "The things I found myself loving about Lafayette were things that I can't get in Houston. In other words, the things that make a city or town worth traveling to. Lafayette has a firmly established identity and understanding of itself in this way that makes it an excellent tourist destination. Its message is clear: Lafayette is the capital of Cajun country. You know exactly what you're getting into when you go there."

Shilcutt tried out The French Press, Cochon, Cuisine du Maman and mentions a few others. She says, "What I really adored about Lafayette, though, is how - by the nature of the strong Cajun culture there - the town is light-years ahead of other cities in its emphasis on supporting local businesses."

It's in that spirit that we hope everyone reading goes here to vote for Lafayette. Hey - even a competing city with its own stellar cuisine thinks we're fantastic. And in the spirit of being neighborly when we win The Ind will invite Shilcutt back for crawfish at Hawk's. Voting ends Jan. 31.