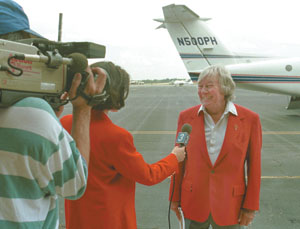 The University of Louisiana at Lafayette lost one of its biggest cheerleaders when Alfred Lamson died recently.

I lost a dear friend, too. Some people may be surprised to learn that our friendship began decades before Alfred led the university's first major fund-raiser. My wife Barbara was employed in the oil business by Cornell Inc. in 1957, and we went to various functions where oil men were present. Alfred was particularly involved in the Petroleum Club, and we met there.

Lafayette citizens probably will recognize the often-recounted story of how I asked Alfred in 1981 to help raise money for a $1 million endowment. At the time, the university had about $400,000 to invest. We were hoping he could help raise another $600,000. That $1 million would be invested; only the earned interest would be used by the university.

Alfred turned me down. The only way he would agree to lead the fund drive was if his goal was serious money ' say $10 million. Raising $600,000 was too much work, he explained. It was easier to get a few donors to donate large sums than to get many donors to contribute smaller amounts. That anecdote says so much about Alfred Lamson. He was generous, fearless, confident.

The significance of the sense of financial security that the $10 million endowment provided in the financially tumultuous 1980s can't be overstated. But the messages that Alfred sent by leading the campaign were more valuable.

By raising the stakes of the fund-raiser, he taught us to think big and to dream big dreams. Today, UL Lafayette has about $120 million in gifted assets. Without Alfred's leadership, that would not have happened.

He was also charismatic. His keen business mind, infectious enthusiasm and his sense of humor enabled him to persuade people to see his point of view.

It helped that he was a raconteur of the highest order. One day, Alfred and I were meeting with some potential donors in Houston. The meeting didn't seem to be going well. But then he smoothly slipped into his storytelling mode, and the atmosphere began to change. The businessmen were captivated by his humor and enthusiasm. When we left that meeting, we had solid commitments of hundreds of thousands of dollars for the university.

I was always amazed that Alfred could ask for money in so many ways. One day, he phoned me to ask if Barbara could plan to have coffee and pastries for a little gathering at our home on a particular afternoon. He said he wanted to invite some bankers and to get them to give money to the university.

So, a group of bankers gathered in our living room one afternoon. I did not know until later that Alfred had done some homework. He had spoken with B.I. Moody III at First National Bank; FNB had then pledged to donate $250,000 to USL.

Alfred made that announcement at this gathering. He then turned to the president of Guaranty Bank and said, "You're always saying that your bank is twice as big and twice as good as First National Bank. You need to give $500,000."

Throughout our friendship, Alfred was always there to help the university in any way he could. He never asked for anything in return.

One of the greatest loves of his life was the Lady Cajuns softball program. He was smitten the first time he went to a game, which was about 15 years ago. He and his late wife, Helen, later paid for construction of locker rooms at Lady Cajun Park, traveled to the College World Series to cheer for the team and promoted Cajun softball any way they could.

I plan to rename Lady Cajun Park in honor of Alfred and Helen.

It's the least I can do for a friend whom I will miss more than I can say. There will probably never be a bigger fan of the softball team or the University of Louisiana at Lafayette.

- Dr. Ray Authement is the president of the University of Louisiana at Lafayette.