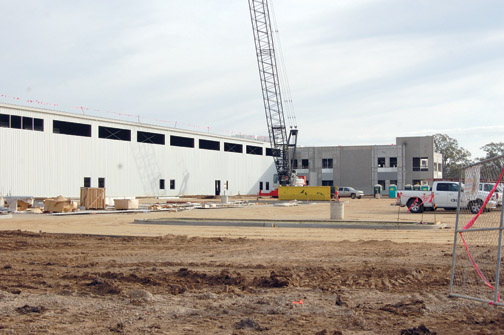 Having an industry base established in an area typically attracts residential development because people want to live near where they work. The same holds true for attracting complementary businesses to a region. Companies want to be located near their suppliers and customers. Having the right individual business or cluster of businesses can help attract new business to an area. For example, PHI's Lafayette presence influenced the decision of FlightSafety International, which provides interactive simulator training for helicopter pilots and aviation professionals, to open a location in Lafayette in 2009. California-based special effects firm, Pixel Magic, originally came to Lafayette during the filming of Disney Pictures' Secretariat and chose to open a second office in Lafayette after filming wrapped.

Earlier this month, Gov. Bobby Jindal announced that Louisiana Plating and Coatings had chosen the city of Scott to be the location of its new facility that will provide a variety of corrosion-protection services to oilfield service companies. The decision to locate in Scott was partially attributable to the proximity to LP&C's existing customers, including the new Halliburton facility that should open later this summer. The Halliburton/LP&C relationship is the perfect example of "build it and they will come."

According to LP&C CEO William Howard, access to Interstates 10 and 49 as well as proximity to Halliburton's plant in Lafayette were important factors in the company's decision to locate in Scott. He also noted that the planned expansion of Apollo Road, which will provide quicker access to Broussard (and additional customers), was also very important to them.

During the announcement, Scott Mayor Purvis Morrison noted the domino effect this business -  really, all businesses - can have on a community. The company employs local residents and they in turn support local businesses. The success of these businesses may encourage other entrepreneurs to open a business in the area that will also employ local residents.

LEDA calculates that over the first five years of operation, the Halliburton facility will have a total economic impact of $459 million. By 2016, the facility will support 314 direct and indirect jobs. A company's direct impact to a community is important, but so is its indirect impact. By creating 150 new manufacturing jobs, Halliburton will stimulate the creation of indirect jobs in complementary industries in the area - we're already seeing that with LP&C. An oil and gas machinery manufacturer will undoubtedly work closely with local machine shops for supplies and trucking companies to transport products. New income generated through the jobs created will be spent on goods and services in the retail, entertainment and health care sectors - thus the domino effect Mayor Morrison mentioned.

In addition to the one-time economic and job impact created during the construction of the $9 million, 80,000-square-foot facility, the company plans to create 120 new jobs with average annual salaries of $35,000 plus benefits over the next five years.

LP&C is likely the first of many projects that will stem from the operation of the new Halliburton facility. We've heard of several machine shops and other businesses that are looking at the area to be closer to the facility. As we do across all industries, LEDA staff will examine upstream and downstream supply chains and identify related businesses that may be viable candidates for relocation to or expansion in Acadiana.

The business development process - whether the attraction of a new business or the retention of an existing one - is not something LEDA does alone. It truly is a team effort. There is no silver bullet or single reason a company chooses to locate in the area. It's the culmination of efforts from allies, including elected and public officials, utilities, real estate, private businesses and more that makes projects such as LP&C, Halliburton, FlightSafety International and Pixel Magic possible.

It's this teamwork along with the quintessential combination of the region's fun loving culture and strong work ethic that continues to make Acadiana an attractive location for businesses across all industries.