One Cup at a Time

Cajuns love their coffee and have been known to stay loyal to their favorite brand, but for the younger Starbucks generation, flavors like mocha, latte and everything in between are the norm. Those coffee drinkers want to be able to re-create that coffee shop experience at home, and now they can do the same at work.

One Cup at a Time 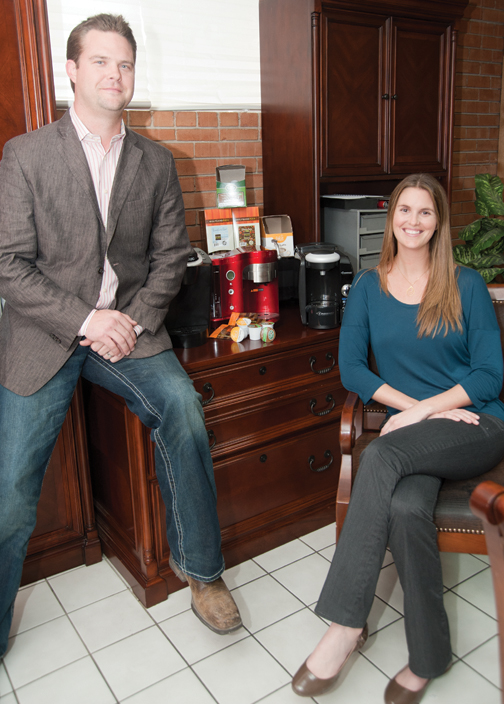 In 2009, the sibling team of Mickal McMath and Lauren McMath Harris launched
Moore Haus Coffee, which specializes in single-cup brewing.

Cajuns love their coffee and have been known to stay loyal to their favorite brand, but for the younger Starbucks generation, flavors like mocha, latte and everything in between are the norm. Those coffee drinkers want to be able to re-create that coffee shop experience at home, and now they can do the same at work.

Lafayette natives and third-generation owners of M&M vending machine sales company, Mickal McMath and Lauren McMath Harris had those customers in mind when launching Moore Haus Coffee in 2009. Taking a nod from their vending machines, the siblings decided to offer single-cup brewing and beverage services from Keurig and Tassimo to offices around Acadiana. Mickal says he knew it would be difficult to compete with Community Coffee, the main provider in the local market, and wanted to offer a product that was totally different from so many locals' favorite brand.

"More and more people are wanting variety," he says. "We have single-cup hot chocolate, single-cup iced and hot tea. When you walk up to a cold drink machine, it doesn't have all Coke in it. It has all these different flavors."

Foy and Hazel Moore McMath began the family's foray into the food service business by starting McMath Sales Co., a Tom's Potato Chip distributorship, in 1951. Their son, Chuck, and his wife, Frances, started M&M Sales in 1972. The company became a franchise of Canteen, the only national vending operating company offering products from Hershey's to Lean Cuisine, and expanded to Houma and Lake Charles in 2005. M&M is currently building a new corporate office and warehouse at its Eraste Landry location to house all of its snack products, coffee and supplies in Lafayette.

Mickal and Lauren grew up in the business, working alongside their parents and running vending routes while home from college in the summertime. They knew they had an existing customer base for coffee and began Moore Haus, named after their grandmother, by offering service to existing vending machine customers. They then branched out to smaller offices, which make up the majority of their 150 or so customers today. Mickal says that doctors and their staffs have proved to be some of the biggest coffee drinkers.
"When we first started, we found that the medical field really embraced the single-cup coffee service and then that led to doctors' offices to specialty medical and continued to grow from there," he says.

Dr. Barry J. Henry's office, which specializes in orthopedic surgery and sports science, was one of the first to sign up. "We used to do old-fashioned coffee-making with a coffee pot," says Manager Karla Landry. "Two guys drank their coffee strong, and the rest liked a weaker blend, so it was a battle of who made the coffee."

Landry admits she was skeptical when Dr. Henry first proposed switching to Moore Haus's single-cup service, but now she can't say enough about the office's coffee station. "It is really custom to your blend as far as medium/mild, decaf/caffeinated, flavored/nonflavored," she says. "I come in at 8:30 and have a fresh cup of coffee. I no longer have to share, and there's no waste."

Moore Haus's offerings aren't limited to coffee; Landry says the office enjoyed apple cider over the holidays, is currently sipping on pomegranate tea and looking forward to iced tea and iced coffee this summer. (The company also offers a variety of other products, from paper towels to snacks, for offices to stock in their breakrooms.)
"I love CC's, don't get me wrong," Landry says, "but this morning we had a vanilla biscotti that was just really, really good."

Mike Bourgeois, vice president of Community's Coffee Service Division, says that while his coffee remains the preferred brand in Acadiana, Community is also looking at entering the single-cup market. "The single cup category is a category that's growing," he says. "Community Coffee is very interested in paying close attention to the category, and we are investing in the single cup, so customers should look for exciting things to come in future."

Mello Joy Coffee, which re-entered the local market in 2000 after a 24-year absence, also services business customers. A spokesman for Mello Joy did not return a call for comment.
Before the introduction of Keurig's single-cup brewing system, available everywhere from Walmart to Bed Bath & Beyond, making coffee one cup at a time may have been a hard sell. Keurig offers more than 200 varieties of coffees and teas and estimates that more than 3 billion cups of its product have been brewed since 1998.

Moore Haus, the only Keurig-authorized distributor in the area, offers the brewing equipment at no charge for customers who use its coffee service.

When they arrive at work or are ready for that afternoon cup of coffee, all employees have to do is choose their flavor, insert the pod into the machine, get their mug ready and push a button.

"You can do some incredible stuff with these machines," says Mickal. "If the product isn't used, it doesn't cost the employer anything. You brew that one cup; somebody's going to consume it right then and there."