The Big Business of Health Care

Health care jobs are driving this economy, and the sector remains red hot.
By Leslie Turk

The Big Business of Health Care

Health care jobs are driving this economy, and the sector remains red hot.
By Leslie Turk

In a 2009 report on the economic impact of the health care industry in Lafayette Parish, which is the most recent available, the Lafayette Economic Development Authority found that the industry is responsible for generating 19.6 percent of the Lafayette Parish gross domestic product and that one out of every five jobs in the parish was tied to it. Today's numbers would likely be very close to those. The overall economic impact of the industry in 2009 was $3.2 billion. Without a doubt, that number is growing.

For starters, just consider what's happening in Lafayette with several local health care firms: The Schumacher Group, which provides emergency and hospital medicine staffing and management services, is spending $19 million to expand its headquarters in Lafayette and has been adding jobs at a feverish pace to its workforce of about 1,500. The company is creating 600 jobs with an average annual wage of $62,500 over the next five years (indirectly the expansion is expected to create another 784 jobs). Also, Acadian Ambulance and its affiliate companies are scheduled to add about 60 employees in Lafayette in 2012, about 25 of which will be in the company's medical division, Acadian CEO Richard Zuschlag says. The company's medical revenue alone grew from $256 million to $285 million, about 9.5 percent, from 2010 to 2011, he says. That figure is projected to reach $320 million this year.

Acadian Companies has roughly 3,600 employees, about 750 of whom have Lafayette Parish addresses. "We do not have it broken down between medical and the other divisions," Zuschlag says. Strangely, however, none of those employees is categorized as medical. "In reviewing state and federal government data over the last several years, it appears that Acadian Companies' employees do not show up under health care employment, but they show up under transportation employment," Zuschlag says. "If you look at LHC Group, Schumacher Group and Acadian Companies, these three entities alone add a substantial number of health care workers in the Lafayette economy. It is my belief that with the major hospitals, doctors offices, clinics, specialty hospitals and rehab centers that the Lafayette economy is much more dependent on health care than in the past."

Another fast-expanding local health care entity, Apex Innovations was one of 14 companies selected by the state in December to participate in a pilot program, Louisiana Economic Gardening, that will aid the 7-year-old company's already impressive average revenue growth of 19 percent annually for the past four years. Apex provides customized interactive online education tools and programs for medical professionals; founder Marianne Bourgeois says it has educated more than 88,600 users throughout the U.S. and in 15 additional countries.

"We've grown from a home-based business with two employees to 12 employees and additional contract personnel," says Bourgeois. Apex, which expanded its 3909 Ambassador Caffery location last year, purchasing an additional building (and adjacent property for future expansion), will likely add three more workers to Lafayette's health care rolls in 2012.
Lafayette's total employment of 153,600 currently includes 21,100 health care jobs, and - unlike oil and gas - those positions are among the most stable in the parish. Job security in this sector is second only to leisure and hospitality employment (see related chart). Overtaken in recent years by both health care and retail trade employment, oil and gas now accounts for 10.8 percent of the metro area's overall workforce. 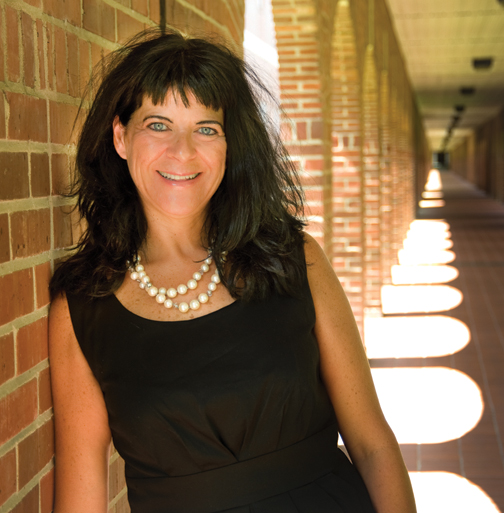 "Entrepreneurism will be rewarded in this industry,"
UL's Paula Carson says of health care in Acadiana.

While she did not have specific numbers for predicted health care job creation in Lafayette, Dr. Paula Carson, assistant vice president for institutional planning and effectiveness at UL, says expected job growth in the state from 2008 to 2018 is highly concentrated in health fields. In fact, of the top 20 areas anticipated to expand most rapidly over that five-year period, more than half are health related. For example, job growth among home health aides is expected to be a whopping 46.1 percent, which represents the largest increase among all occupations and translates to 623 annual job openings. Next is personal care aides, which will be bolstered almost 44 percent, followed by pharmacy technicians, 35 percent, medical assistants, 34 percent, physical therapy assistants, 33.4 percent, and physician assistants, almost 29 percent.

Through 2018, 1,664 registered nurses will find jobs in the state each year, as will 731 licensed practical/licensed vocational nurses. Following a national trend that favors hiring better trained nurses in many critical care areas, Lafayette General announced in October that it will shutter its LPN program after the current class graduates in February. The hospital noted that the scope of practice for LPNs is limited compared with RNs, who are able to perform more complex procedures and have significantly enhanced decision-making power.

There really is no end in sight for growth in the local health care sector, which is showing resilience in the face of health care reform, says Carson. She also notes that medical treatment and intervention that is preventative and provided in the least restrictive setting will be the most reimbursable by both insurance companies and the federal government.
"Practitioners focusing on early detection, mitigating illness and minimally invasive rapid-recovery options will likely see a strengthening job market," says Carson, who also is immediate past chairman of the board of the Lafayette Economic Development Authority. "This will boost employment in outpatient settings, home health, hospice care and rehab facilities." Additionally, Carson anticipates that health care reform's new reporting and tracking burdens will increase demand for non-clinical, health care workers, such as medical assistants, coders and insurance specialists.

In spite of ongoing national efforts to cut health care expenditures, Carson says the aging demographics of the population and the opportunities offered by evolving medical technology and interventions will lead to longer life spans, which she believes will increase demand for health-care workers in all areas. "There will also be a growing demand for less-expensive physician-substitutes and supplements, such as nurse practitioners, CRNAs and physician assistants."

Citing Schumacher and Acadian as examples, Carson emphasizes that Lafayette has become a global provider of skilled labor and delivery systems. "Lafayette benefits enormously from the presence of companies such as these, even if residents never require their services," she says. 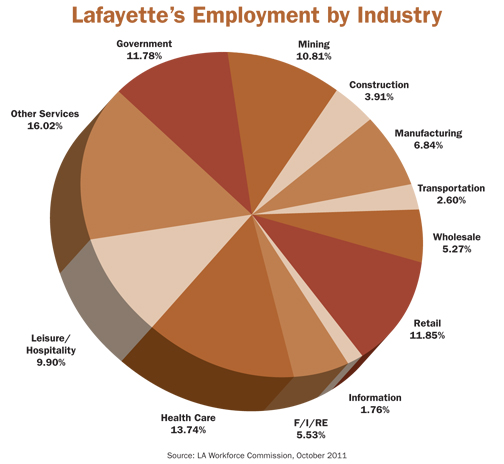 What this job growth in health care means is that more businesses like Apex Innovations will be sprouting up to serve the sector - and even more employment in this field of high-paying jobs will be created by those startups. "Entrepreneurism will be rewarded in this industry," Carson says. "Businesses developing innovative, reliable and affordable services, from the provision of basic services such as home sitting and medical transport to much more complex such as remote electronic diagnostics and treatments, will almost certainly find there is market demand."