Tea Party of La. drafts Landry to take on Boustany 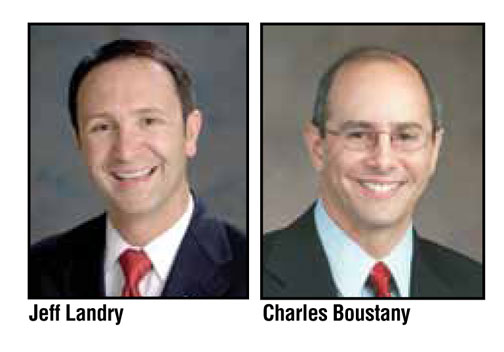 Tea Party of La. drafts Landry to take on Boustany

[Editor's Note: There are two tea party groups based in Baton Rouge: The Tea Party of Louisiana and the Baton Rouge Tea Party. The former is urging Landry to challenge Boustany.]

And what a hotly contested race that would be. Landry currently represents the 3rd District, which was all but eliminated in federal redistricting, and bets have long been on that the Tea Party darling would challenge fellow Republican Boustany, who is in his fourth term representing the 7th District and plans to seek re-election. Boustany, an establishment Republican, was unopposed in 2010.

The Tea Party in Boustany's hometown isn't taking sides just yet. "The Tea Party of Lafayette cannot speak for Tea Party of Louisiana," says TPL coordinator Joyce Linde. "We have not taken a position on this ... potential challenge."

The new 3rd District is basically Boustany's current 7th expanded a little eastward to fold in the western edge of Landry's current district and will include Landry's hometown of New Iberia.

"We have drafted Jeff because he will continue to represent the best interests of Louisiana, not the self-appointed ruling class' in Washington," the Tea Party of Louisiana said in announcing its support.

Political columnist John Maginnis called the statement "a jab at Boustany, who is closer to the GOP leadership and Washington-based contributors."

Landry, however, still won't publicly confirm his intentions. "Congressman Landry has not made any official announcements regarding his plans this year. He is frustrated with a broken Washington that has pursued policies of bailouts and putting more debt on our children," says Brent Littlefield, Landry's political adviser.

In November, the freshman rep's office announced that Citizens United, the conservative advocacy group that helped open the flood gates for corporations to spend unlimited amounts of money influencing elections, had donated $5,000 to his campaign "to boost his potential bid against four-term Rep. Charles Boustany."

Boustany had only this to say about the Baton Rouge Tea Party's endorsement of Landry and speculation the two may face off: "I look forward to continuing representing South Louisiana in Congress. From Starks to Crowley, Lake Charles to Lafayette, I am providing the people of South Louisiana a reliable, conservative voice in Congress.

"I plan to run for re-election and win in 2012," Boustany continues. "My meetings and visits to the neighboring parishes of Iberia, Saint Martin and Saint Mary have been fruitful and positive."
The election is Nov. 6.