Lafayette Consolidated Government's traffic director is making a case for the efficacy of the SafeLight and SafeSpeed programs in the Hub City. 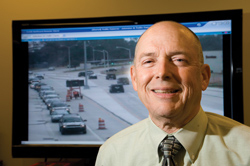 Lafayette Consolidated Government's traffic director is making a case for the efficacy of the SafeLight and SafeSpeed programs in the Hub City, namely the programs' reduction in collisions and, by extension, the reduced need for public safety officials to respond to such collisions.

In a status report issued Wednesday afternoon, Traffic and Transportation Director Tony Tramel provides a history, analysis and revenue update on the controversial programs that were introduced to Lafayette streets in the fall of 2007. Coincidentally (or not), the report comes a day after City-Parish Council members discussed the possibility of ear-marking RedFlex revenue for purposes other than for what they were originally intended.

According to Tramel's report, the SafeLight (camera enforcement at intersections) and SafeSpeed (the speed vans) programs have generated $10.6 million in revenue through November of last year, which represents a four-year period. Of that total, LCG has gotten $5.7 million while the vendor, RedFlex, has received $4.9 million.

Also detailed in the report is an analysis of SafeLight intersections showing a marked reduction in collisions. Using the 14-month period before the cameras were installed and comparing it to the 14-month period after the cameras were installed, the analysis shows that total crashes at these intersections fell 63 percent after the introduction of the program: 343 before installation compared to 126 after. Rear-end collisions fell the most - 69 percent - while right-angle collisions fell 51 percent.