A zoo so nice they have to say it twice and perform two nights next week.

A zoo so nice they have to say it twice and perform two nights next week. 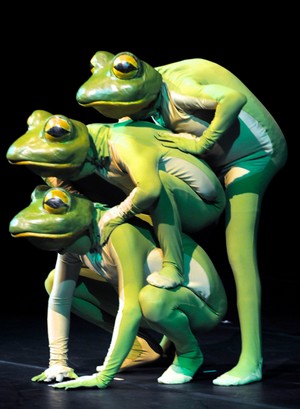 Jan. 31 and Feb. 1 at 7 p.m. at the James. D. Moncus Theater located in downtown Lafayette's Acadiana Center for the Arts is an show that has been making the international rounds for years and has now landed here. It's a show for kids that the adults with them can marvel at.

Performed by the Imago Theatre, you can describe ZooZoo simply by saying that it is humans acting as animals through a series of pantomime, masks and dance: ZooZoo shows what would happen if penguins played musical chairs or rabbits drove cars, or even if hippos were plagued with insomnia.

The more elaborate answer for grown-ups is that the Imago Theatre began in the U.S. in 1979 founded by Carol Triffle and Jerry Mouawad. The pair trained at L'École Internationale de Théâtre Jacques Lecoq, founded by its namesake in 1956. Lecoq taught the art of movement and mime through observation, making the body's every twitch and step count as something altogether much more alive. Actor Geoffrey Rush is a graduate of this school, as well.

Imago combines the Lecoq style and the history and ritual of masks to turn humans into their animal kingdom counterparts. It's been described as the Cirque du Soleil meets the traditional circus.

ZooZoo has performed across the U.S. and in Europe and were even invited into China. Tickets range between $10-$25 and can be purchases online here or by calling the AcA's box office at 233-7060.