After their innovative wind energy proposals failed to generate excitement in Louisiana, local Sierra Club Chairman Harold Schoeffler and oil magnate Herman Schellstede are getting a welcome reception across the border. 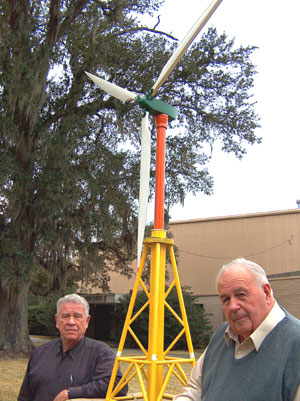 In February 2004, Schoeffler Cadillac co-owner Harold Schoeffler and New Iberia oilman Herman Schellstede announced their new joint venture, Wind Energy Systems Technology LLC. Headquartered in New Iberia, the company planned to use abandoned oil rigs off Louisiana's coast as platforms for some of the nation's first offshore wind farms. It was an innovative idea ' one that Schoeffler and Schellstede found to be a tough sell in Louisiana. "Harold and I went to the Public Service Commission the first time, and they figured that we were completely and absolutely crazy in thinking there's any alternative energy in Louisiana," Schellstede says.

Two years later, the Louisiana PSC is still studying its options when it comes to wind energy. But WEST isn't waiting around anymore and pinning its hopes on the Louisiana coast. Under a subsidiary named Galveston-Offshore Wind LLC, WEST recently signed a 30-year lease with the Texas General Land Office to develop the nation's first offshore wind farm off the coast of Galveston. Over the next three to five years, WEST plans to erect 50 turbines on the 11,355-acre site at a total cost of almost $240 million. The offshore wind farm is expected to generate 150 megawatts of electricity a day, enough to power 40,000 homes.

For WEST, setting up its first wind energy project in Texas was much more practical than trying to work off Louisiana's coast. While the Louisiana Department of Natural Resources did get a bill through the state Legislature last year to allow for the leasing of offshore state waters for wind farms up to three miles off the coast, the Public Service Commission hasn't adopted regulations that would allow WEST to sell its power.

At the end of last year, the PSC looked at a study from a consulting firm that examined different incentives other states have implemented to encourage the development of renewable power. Texas is one of 20 states that have set up systems to require utility companies to buy a portion of their power from renewable energy generators. The requirement helps to seed the renewable power industry in a state, eventually allowing for renewable power to become a competitive alternative to traditional fossil fuel power generation. Until Louisiana adopts a similar system, WEST is shut out by utility providers and has no way of selling its power.

WEST hasn't been the only one lobbying the PSC to promote the use of renewable energy. Several other parties, including state Agriculture Commissioner Bob Odom's office, have touted the benefits of generating electricity by burning agricultural byproducts such as wood chips, sugar cane residue and rice hulls. Not only is this a clean, renewable source of energy, advocates say, but it also gives farmers a profitable way of disposing of byproducts.

"Beyond wind, we have outstanding renewable energy opportunities in Louisiana," says Schoeffler, who also chairs the Acadiana Chapter of the Sierra Club.

The state's three largest utility companies, Entergy, Cleco and Southwestern Electric Power Company, have rallied against any regulations that would require them to purchase renewable energy. They insist the power sources are unproven and that other auxiliary costs from transmitting the power and adjusting the power grid for intermittent sources ' like wind ' will drive up their expenses.

Schoeffler and Schellstede maintain all of these issues have been worked out. Because Louisiana's coast is ideally suited for wind power, they say, the utility companies are passing on a golden opportunity. Unlike onshore wind, offshore wind blows primarily during the day, when demand for electricity is at its peak. As for transmission costs, offshore wind farms can help greatly reduce the distance that electricity currently must travel to reach several coastal communities, like Port Fourchon. "We can do [wind energy] better and cheaper than anybody," Schoeffler insists.

Right now, the PSC is siding with the utilities, opting to hold off on any renewable requirements. Bill Robertson, who serves as Commissioner Foster Campbell's executive assistant, says commissioners are cautiously optimistic when it comes to renewable energy. He says it's really unknown how cost-competitive these renewable energy projects will be in Louisiana, "because nobody's doing it right now."

"Right now," Robertson says, "the commissioners are focused very carefully on anything that affects the price of electricity because the prices are really high right now based on our general dependence on natural gas.

"That's kind of a double edged sword," he continues, "because the higher the price of conventional fuels, conceivably the lower the price of a renewable product. But since it's still largely unknown how much the renewable energy is going to come in, in terms of price, the commissioners are a little bit leery about putting their toe in the water."

The debate may be just beginning. The PSC has now directed its consultant to go one step further and develop a detailed analysis on the feasibility of renewable energy projects in Louisiana. They also ordered a proposal for a green pricing program. Green pricing requires that utilities give their customers the option of paying a little more each month for electricity by guaranteeing that it come from a renewable source. Robertson expects the PSC will be able to review these studies in about three months. WEST is also considering a small, PSC-approved 35-megawatt pilot project off the coast of Port Fourchon.

For Schoeffler and Schellstede, both elderly white-haired men, the slow-moving bureaucratic process has been frustrating.

"Does a wind turbine work in Louisiana?" Schoeffler asks incredulously. "I mean if it works in Germany and Spain and England and Australia, why wouldn't it work here? What kind of nonsense is that? Texas is grinding out 3,000 megawatts of windpower. In Texas, they know the wind works. We don't have to prove it to Texas; they've got it figured out. We had no choice but to go to Texas."

Jim Suydam, spokesman for the Texas General Land Office, says the deal with WEST will generate a minimum of $26 million for Texas' permanent school fund through royalty payments on the energy. In addition, the state is already collecting on the $10,000 annual lease. Schellstede, who has 37 years of experience in the offshore oil business and whose father worked on the crew of the nation's first offshore oil rig in the Gulf, makes the project a sound bet for Suydam's office.

"He's literally grown up with the business of building offshore platforms," Suydam says. "He wants to continue to build platforms. We want to continue to be able to make money for the permanent school fund. We're both just looking for different ways to do the same thing, and wind seems to be the way to do it. They found that Texas was an easier state to do business in than Louisiana.

"We're the first people to be getting paid for this right now," Suydam adds, "and we think as the years go by, we stand to make a lot of money off this. We've got 367 miles of coast, 10 miles out. We would hope to lease a good portion of that to wind energy development because it makes sense."

Many Texans are already experiencing the benefits of wind energy. Austin's municipal utility has a green pricing program, which locked customers who wanted renewable energy into a 10-year fixed rate for their electricity. With the current increase in natural gas prices, green power customers in Austin are getting lower energy bills than customers using traditional energy sources. Demand for the program has exceeded supply, and Austin's utility recently raffled off the remaining renewable power capacity.

"I don't think the price of natural gas is going to go down any," Suydam projects. "And at [current prices], wind is cheaper. So, it's not about feeling good, and it's not about being groovy and green or anything. It's all market-based economics. And the fact that it is good for the environment is like frosting on the cake."

Schellstede wouldn't be investing in wind power if he didn't see enormous potential. He and Schoeffler often point to a 2003 Stanford University study that identifies Louisiana's Gulf coast as the most opportune location to develop wind energy.

"We've always known this from the oil and gas operations," Schellstede says. "[The wind] blows you out of the Gulf. But we never put two and two together."

A mild-mannered man who towers over 6 feet tall, Schellstede's always been a shrewd wildcatter. His company is currently involved with one of the deepest offshore natural gas drills in the Gulf. At the Schellstede and Associates office, housed in a historic 19th century wood floor schoolhouse building along the Bayou Teche in New Iberia, Schellstede proudly displays large-scale models of oilfield work boats his company helped design. (Schellstede and Associates holds more than 80 patents.) One model of the world's largest barge rig occupies an entire corner of a room.

Schellstede has set up the WEST office with five employees in an adjacent building on the old school campus. Mounted on a pedestal outside the WEST office is a new 5-feet-tall model of a red wind turbine hooked into a yellow base that resembles an oil derrick. The turbine tower is adjustable, able to slide up and down into its support base. Schellstede says with this design, WEST will be able to pull down its turbines' collapsible propellers in the event of a Gulf storm or hurricane.

There's still a lot of work to be done before WEST can put these turbines on the leased property off the coast of Galveston. Within the next two months, WEST will erect two 80-foot high meteorological towers to identify the best locations for its turbines. Schoeffler will conduct a study examining the Gulf flights of neo-tropical birds to ensure that the turbines do not endanger their migration. And through a partnership with Texas A&M, WEST plans to collect data on Gulf wind and water currents. Schellstede says the yearlong study will cost the company about $5 million before it puts up a single turbine, but in the end, he thinks it will pay off. He is courting big investors interested in partnering in the project once the study verifies the Gulf winds.

"We're going to learn more about that area than anyone's ever learned before," Schellstede says. "It's very expensive to do, but at the same time it's worth everything. The economic models that we have, especially if oil goes up to $100 a barrel, there's a really reasonable payout on these wind farms."