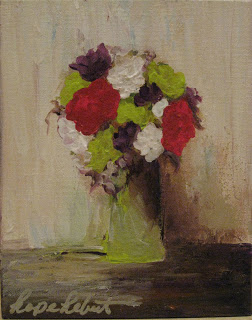 Since 2003 the nonprofit SNMFA has been showcasing artists from around the world with a particular eye turned toward contemporary art, and Hebert's style fits in perfectly.

Hebert says she began painting in high school. Then, like they say, life got in the way and she didn't pick up her brush again until around 2000. "My children were getting older and I wanted to revisit painting," Hebert said this morning via phone interview. Living in New Iberia at the time, she began to attend any art classes in Lafayette when she could, anywhere she could. It was here that she found her voice in acrylic paints.

"My style is in between realism and abstraction," says Hebert. From forms to landscapes and from her widely known guitars and wine series, Hebert plays with bright colors and whimsical lines to evoke her impression of her subject.

This show at the SNMFA features three of her paintings. She was invited because she was included in the book International Contemporary Masters Volume V and many of her fellow artists in that book are showing at this exposition, as well. The book's editor is its curator. Plan are for Hebert's work to also appear in the sixth volume next year.

Each artist submits three pieces. Hebert's picks are "Frans Chessta", an example of her unique style of portraiture; "Pappa's Got a Brand New Gun" which is an abstract impression of a guitar and "Just You & Me" from her wine series. The latter two are being completed this week but the former can be found on her website.

A mother of two and grandmother of two, she paints full-time and has seen inclinations that the brush is genetic. "My daughter paints a little and my grandchildren have entered art shows at school," she says.

Hebert's paintings can be found locally at Rue du Pont Galerie et Studio in Breaux Bridge and both City Club and Eclectic Design & Interiors in Lafayette. Her work is also on her site. Look for her to have a show at downtown Lafayette's Chase Towers this spring, as well.

The show at the SNMFA will boast Hebert's work through June. This is her first museum show. "I'm so honored and thrilled to have been selected to be in the book and then actually have a showing at a museum. I like to create pieces that people will enjoy and are just fun and happy," she says.