Convicted serial killer Derrick Todd Lee is on Death Row at Angola State Penitentiary and is evidently earning a little extra money producing art, according to The Advocate.

Two colored-pencil drawings by the man known variously as the Baton Rouge Serial Killer and the South Louisiana Serial Killer - one of which has already sold - are posted at the website SerialKillersInk.net, a site dedicated to murder memorabilia or "murderabilia," as the site's owners refer to the merchandise. Although it's against prison rules, Lee appears to benefited financially from the arrangement, according the Baton Rouge daily, which traced a $20 payment made to Lee by one of the site's co-founders through an inmate services website.

That co-founder, Jesska Gein, writes today on her site that Lee solicited her to sell the paintings; she even posted what she says is the letter from Lee enquiring about selling his work through SerialKillersInk.net.

Lee has been linked to the murders of seven South Louisiana women including Dené Colomb of Lafayette who was murdered in November 2002. Lee was indicted for Colomb's death in September 2003, but the Colomb family decided not to pursue a trial in Lafayette because Lee had already been convicted and sentenced to death in connection with the murder of an LSU graduate student. 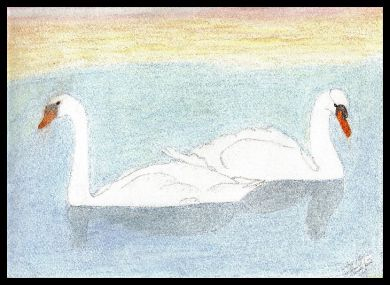 A 9"x12" drawing of swans by Derrick Todd Lee recently sold
for $75 at SerialKillersInk.net. A second piece of art by Lee
depticting a panda eating bamboo was originally posted for $75
but is now listed at $150 on the site.