Former state legislator will earn $36,000 per year, plus meals and travel.

Ex-state Rep. Rickey Hardy's unemployment was short-lived. Hardy, defeated in November for the District 44 seat by Vincent Pierre, was appointed to the state's Board of Pardons by Gov. Bobby Jindal. The board is responsible for making recommendations to the governor regarding applications for clemency and pardons of state prisoners, but the governor does not have to act on its recommendations. 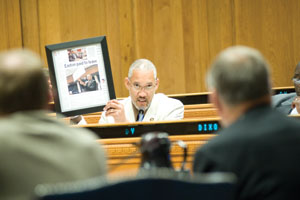 Hardy is one of four board members earning $36,000 per year; the board's chair earns $42,000. All five are appointed by the governor, with one member named from nominations submitted by any victims' rights advocacy organization recognized as a nonprofit by the Internal Revenue Service.

As a state rep, Hardy earned $16,800 annually, plus per diem for days when the Legislature was in session and for committee service. His pay and reimbursements totaled about $32,000 in 2011.

By law, board members also qualify for insurance and retirement benefits.

The board meets twice a month in Baton Rouge, but the former legislator who spent much of the past four years cracking down on white-collar corruption said Tuesday morning he will devote his full attention to the post, spending his time gathering information on cases to help weigh his decisions. "I'm going to devote my time, 110 percent, to make sure we make the right decisions. We are dealing with people's lives and we are dealing with the victims. It's an emotional situation for families and victims," he says.

Hardy also pledges to study ways to lower the state's incarceration rate, which is the highest in the country. "If you think education is expensive, try incarceration," he says. The former state rep will find support in that effort from Blueprint Louisiana, which in September made adopting "smart on crime" reforms one of its top five recommendations to support during this legislative session.

Blueprint's research found that one out of every 55 adults in Louisiana is in prison compared with one in 100 adults nationwide. The nonpartisan reform effort, backed by community and business leaders across the state, says the population in Louisiana prisons has doubled over the past 20 years, with 40,000 adults incarcerated and another 69,000 people on probation or parole. Only 37 percent of offenders in Louisiana have been convicted of violent crimes, and the average sentence for a drug-related crime is almost 10 years.

Meanwhile, Louisiana taxpayers are doling out $700 million to operate prisons, most of which comes from the state general fund. The state spends more every year to keep people in prison, but the overall crime rate is not going down, Blueprint's stats show. "The cost of incarceration means we are not matching our resources with our priorities," Blueprint wrote in its recommendations.

So far, little is being done to address the issue in the state, especially as it pertains to non-violent offenders. "Over the past year, the reinvigorated Louisiana Sentencing Commission - composed of district attorneys, judges, sheriffs, legislators, victims, and other public safety stakeholders - unanimously approved a set of policy recommendations to the Louisiana Legislature for consideration in the 2011 regular session," Blueprint wrote in its September report. "The recommendations were based on a careful examination of prison population data and evidence-based corrections practices. Yet the proposals faced an uphill battle at the Capitol, ultimately achieving only limited success."

The governor's office announced Monday that Hardy will serve with Leonard "Pop" Hataway of Dry Prong, ex-sheriff of Grant Parish and former president of the Louisiana Sheriffs' Association; Henry "Tank" Powell of Ponchatoula, the owner of Powell & Associates Insurance and a former member of the Louisiana House of Representatives; and Mert Smiley of Saint Amant, a former member of the state House and owner of Smiley Enterprises Incorporated. The press release did not mention the fifth member.