Dr. Chuck Wyatt has been working 15 years to educate Acadiana about heart attack symptoms - and his efforts are saving lives.

Dr. Chuck Wyatt has been working 15 years to educate Acadiana about heart attack symptoms - and his efforts are saving lives. By Lisa Hanchey Photo by Robin May 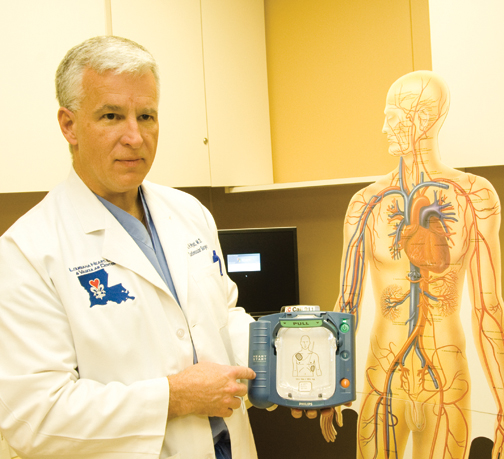 Dr. Chuck Wyatt with an AED

When cardiovascular surgeon Dr. Chuck Wyatt arrived in Lafayette in 1997, victims had a resuscitation rate of 1 percent following sudden cardiac arrest. "Out of 100 people who would collapse dead in our community, only one would survive and walk out of the hospital," he says. But today that rate has risen to 22 percent in our community, thanks in large part to Wyatt's Heart Starter program.

Just in time for Heart Month, he offers Independent readers some tips on what to do if you have heart attack symptoms while alone.

Heart disease is the leading cause of death in the U.S. According to the latest available statistics from the American Heart Association, 244.8 per 100,000 people die of cardiovascular disease. Outside of a hospital, about 50 percent of deaths occur within an hour after a heart attack. "Your chances of survival decrease 10 percent for every one minute of doing nothing," Wyatt says.

To avoid becoming a statistic, the first step is to recognize the signs of cardiac arrest. Many times, the classic "elephant standing on your chest" feeling is not present. In fact, 30 percent of diabetics have no pain at all. "The first thing that you want to do, and most importantly, is to recognize what's going on," Wyatt says. "Because, many times, people don't know that they are having a heart attack. They think it's indigestion, they think it's heartburn, they come up with a hundred different things that it's not. And so the first thing that they need to understand is that a heart attack can be felt in a lot of different ways."

These include excruciating chest pain, left arm tingling and numbness, left-sided jaw pain and indigestion. "If it's something new and sudden onset and doesn't go away, don't dismiss it," Wyatt cautions. "It should be investigated."

For women, the symptoms are the same as men's, but not necessarily as dramatic. "Subtle left arm pain or left jaw pain, or maybe not much feeling at all other than, I just feel bad,' can be symptoms for women," Wyatt says. "We always think of chest pain in the macho man, but anyone can have heart disease."

If you think you are having a heart attack, seek medical attention immediately. Call your doctor or 911. "You never know at the home or in a restaurant or whatever, whether that heart attack, that chest pain, will progress, in the worst case, to sudden cardiac death," Wyatt says. "Ignoring it is the worst thing."

Over the years, Wyatt has taken a grass-roots approach to bystander heart attack response in Lafayette. Back in the '90s, the chain of survival - early recognition, notification of 911, bystander CPR and getting a defibrillator to a victim, and advanced medical care - was not present. "What was happening in our community was that links one, two and three were broken," Wyatt recalls. "We had great advanced systems with the paramedics into the hospitals, but people were already dead."

So Wyatt spearheaded an Automated External Defibrillator Task Force to deploy the devices in large groups of people. "An AED is about the size and cost of a lap top, and it's programmed, like a computer, for an eighth-grader to be able to open it up, listen to the instructions and apply CPR and the pads and the electrodes to shock somebody's heart," Wyatt explains.

The task force got the Lafayette Parish Sheriff's Office and the Fire Department on board to purchase AEDs for all of their vehicles and wrote all of their dispatch protocols."Before, when you called 911, you got an ambulance," Wyatt recalls. "Now, you call 911, you get a fire truck and an ambulance. Why? There are 14 fire stations in this town, and there are only five ambulances. Any fire truck can reach you in three or four minutes."

Next, Wyatt and his team launched "Be A Heart Starter," a CPR mass training event held at the Cajundome. Each year, more than 300 volunteers help train 800 to 2,000 participants during the free two-hour class. Now in its 12th year, the program has trained 14,000 people on how to save heart attack victims. "In 2007, we were the largest single-day, single-site training event in America," Wyatt says. "We sometimes have three generations of families who come or a whole high school class for extra credit. Everybody is there for different reasons. But at the end of the day, it's very rare now to collapse in the city of Lafayette and not have somebody doing bystander CPR. That's pretty cool."

During American Heart Month in February, Women's & Children's Hospital, part of the Regional Medical Center of Louisiana, is launching the Friends & Family CPR class for people who want to learn CPR but do not need a course completion card. The free course teaches life-saving skills of adult hands-only CPR, child CPR with breaths, adult and child AED use, infant CPR and relief of choking in an adult, child or infant. Participants will learn skills using the American Heart Association's practice-while-watching technique, with hands on CPR practice time. This class is ideal for students, new parents, grandparents and babysitters.

To recognize your risk for heart disease, Regional Medical Center just launched a free online Heart Profiler tool. This application assesses the condition of your heart to determine if you should pay closer attention to your cardiac heath.

"The fundamental message is that Acadiana has become a safer place to live because of the grass-roots efforts of many," Wyatt says.

The 2012 Be A Heart Starter class will be held April 14 at the Cajundome. The event lasts two hours and is free to the public. For more information, visit www.heartstarter.org.

On Feb. 6, the Emergency Cardiac Care Committee for Area 5 is hosting a free training on first aid for choking and AED use. The event, which is for all restaurant workers and staff, will be held at 6 p.m. at The Shed Barbeque & Blues Joint, 308 Hwy. 93 North in Scott. For more information, contact Gina Versaggi at (337) 981-5911.