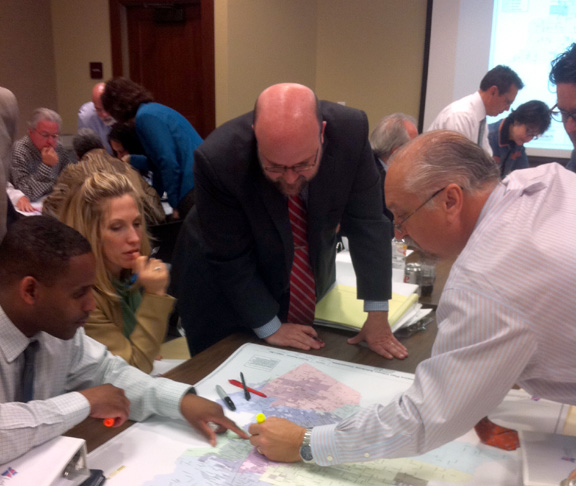 Committee members broke up into small groups Wednesday to
discuss areas in Lafayette Parish they believe are most in need
of planning.

The Comprehensive Plan Citizens Advisory Committee took its first steps Wednesday, holding an inaugural luncheon-meeting and setting the general agenda for what will be 18 months of public hearings, meetings with planning consultants and ultimately legislative initiatives before the City-Parish Council.

The group comprises about 30 people - nine of whom, by our count, are women and eight of whom are black, with some overlap - from a variety of employment and professional sectors in Lafayette Parish including the Greater Lafayette Chamber of Commerce, the Lafayette Economic Development Authority, UL, the Acadian Home Builders Association, Lafayette Consolidated Government, arts/culture groups and non-profit agencies.

City-Parish President Joey Durel also urged the group to get the whole parish involved. "This can't be the politicians' plan. If this doesn't become the citizens of Lafayette's plan it's destined to failure," Durel told the committee. "You have a chance to put your thumbprint on a little bit of Lafayette."

Last December Durel signed a $1.2 million contract with Philadelphia planning firm Wallace, Roberts & Todd, whose consultants will work with the advisory committee and LCG planners to develop a comprehensive plan - through a series of public meetings and, they hope, via a lot of public input - designed to address such long-term issues as transportation, drainage, recreation and neighborhood planning.

The plan will be based in part on Lafayette In a Century, an earlier comprehensive plan put together in the 1990s by LCG planners and volunteer committees.

"The great advantage to a comprehensive plan is that it makes us focus, both private sector and public sector, and it makes people think about the future," says LCG Planning Manager Mike Hollier. "Everybody has a role to play in how this comes together, which is so exciting for me."