All those predictions of a bumper crawfish season look a little shaky. 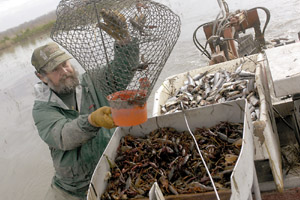 While aquaculture specialists have been predicting a good recovery from Hurricane Rita for the crawfish crop, seafood patios and boiling joints are still clawing for a steady supply of mudbugs. "The availability of crawfish is scarce," says Dwight Breaux, owner of Dwight's in Lafayette. "We couldn't get enough to open up Saturday night." He's not the only one. Cajun Claws in Abbeville is a boiling house noted for their select crawfish. "It's never happened before that we could only open two nights a week," owner Donni Choate says. "But if we can't get the best, we don't open."

Crawfish are beginning to show up on the market, but the size is small to medium ' not what locals prefer when they go out to eat.

Choate operates as a broker, buying crawfish for Cajun Claws and selling the surplus to other restaurants. Typically he buys from fishermen whose ponds are located around Henry, Mouton Cove and Forked Island, all spots hard hit by Rita's storm surge. Ted Noel, one of Choate's suppliers, has 200 acres of ponds in Perry, south of Abbeville. About 30 percent of his ponds had some degree of inundation from Rita, although Noel says it didn't result in a high degree of salinity. Nevertheless, his ponds aren't producing normally.

"Things have been kind of mysterious since the storm," he says. "We had great indicators that this would be a good season, but we haven't been catching."

Historically, there was a short crawfish season in November, then harvesting began in earnest in January. Noel was in the processing business for 10 years until 1992, before he began farming himself. "In those years [when he was processing], I could count on opening on November 15." Once he began farming, he says his ponds routinely began producing in late December for the January season. "Now, things seem to be two months or more behind," he says. "We're going into February, and the catch is not strong. It's barely worth fishing. If it weren't for the high restaurant price, it wouldn't be worth fishing."

Restaurants pay significantly higher than processors because they are looking for a superior product to put on the table. Wholesalers may pay $1 per pound for a sack of crawfish, but restaurants that want select crawfish are likely to pay double that price, which helps farmers struggling to meet costs for labor, bait and freshwater pond pumping during dry spells.

Choate hand-selects his crawfish and is quick to differentiate between big crawfish and select crawfish. The difference, he says, is quality, which does not necessarily mean only size. "There's no count on it, like with shrimp." Shrimp is graded by size and weight; the fewer shrimp per pound, the bigger the shrimp. For example, a 10-15 count signifies jumbo shrimp, while there's no such grade for crawfish, which are eyeballed as small, medium or big. "What you're looking for is the cleanness and the softness of the shell. A big young crawfish is tender. It's got a lot of fat, and it's better quality," Choate says. "If they're black and stained up, I don't put them on the dinner table."

Abbeville-based LSU Ag Center aquacultural specialist Mark Shirley says the January rains will produce a flood of crawfish by high season, March and April, as the water warms up. Hurricane Rita affected about 5,000 out of 100,000 acres of ponds in Louisiana. "Some of these ponds are recovering and will produce a limited amount of crawfish this year," Shirley predicts. "The rain has helped flush out the residual salt. Conditions are more favorable for rice [a companion crop with crawfish], as well."

But Noel isn't convinced. Seventy percent of his ponds weren't flooded by Rita, and he isn't seeing crawfish in those ponds either. "We used to think we were right on cycle. Since the storm, none of that is seemingly the same. We're scratching our heads." Last year, in the season following Rita, Noel's ponds didn't produce until after February. "After Easter, there were no big crawfish, just little babies. Our catch fell to a quarter of what it was before Easter, and made it not worth fishing."

Normally once high temperatures set in June, the crawfish dig into the mud and hold over until October, a cycle Noel says is called "recruitment." Last year, the crawfish started burrowing in April. "So many burrowed in that we thought, man, it's going to be gangbusters [this year]," Noel remembers.

In the summer, crawfish farmers plant rice in their paddies as food for their crawfish crop. Fields are flooded lightly in September and October. The water draws the crawfish out of the ground, and they breed. This October, Noel says he saw a lot of holes and chimneys open up as his recruitment came out to breed. That was the indicator LSU has used as a predictor for a good crawfish crop. Another indicator is muddy water in January, a sign of activity. "My water looks like chocolate milk," Noel says, "but there aren't many crawfish."

Noel speculates that his recruitment struggled with the salt residue, making them less fertile. The long cold wet spells of December and January might also be contributing to the dearth of crawfish. And Noel says he is still seeing fresh holes right now, meaning crawfish are just emerging to breed. "We thought it was going to continue year after year. After the storm, it's different. Is it the storm? Is it global warming?" he wonders.

The entire industry is hoping that the season will catch up by March and there will be enough crawfish to meet springtime demand. Meanwhile, farmers and restaurateurs are anxiously watching the weather. "We're missing sunshine in this recipe," concludes Dwight Breaux.