A new sweets contender has emerged on Lafayette's south side - Indulge has opened at 1921 Kaliste Saloom Road. 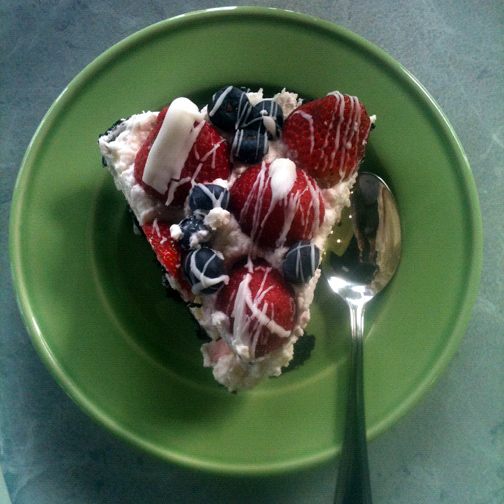 Torte: Strawberries and blueberries are drizzled with white
chocolate and set on a bed of whipped cream and creamy cake
with a chocolate crust.

A new sweets contender has emerged on Lafayette's south side - Indulge has opened at 1921 Kaliste Saloom Road.

Owned by Barbara Judice, Indulge is a dessert restaurant featuring the best of cupcakes, muffins, truffles, cakes, ice cream and more. There is also a wonderful selection of coffee, offering everything from the "pour over" method to Vietnamese to the Italian styles of coffee.

Orleans Cofffee Exchange provides the beans. Sticking to her wont to procure as many local goods as she can, Judice went with Orleans because of its high quality - it roasts to order and only when you place the order - and because of its location.

Another New Orleans' standby, the legendary Sucre, is offering its sweet provisions at Indulge as well. Right now Indulge is carrying Sucre's macaroons, with plans to carry more in the future. The truffles are made by the famous West Coast confectioner Moonstruck. Blue Bell ice cream is offered in several flavors.

Sue Barras is the French pastry chef who is filling the case with freshly baked goods daily. Originally from Ohio, Barras learned her trade from chefs in Boston before fate had her marry a native and move down here. Also baking for Charley G's and Masala, Barras is dedicated to keeping her desserts not only fresh in quality but freshly unique to each restaurant for which she bakes. Desserts can be made to order, not only to be picked up but for events hosted at Indulge.

"I wanted to be a dessert restaurant," says Judice. "I think Lafayette needed something like this. I wanted a place where you didn't go to the counter, you could sit down and be served wonderful desserts." Judice is familar with great service - she is part of the family that owns Judice Inn. After 30 years in business management for offices she decided to bite the sugary bullet and open her own place. "I've been thinking about doing this for three years," she adds.

The interior is a muted lime and pink with splashes of dark antiques and white refurbished pieces, included electrified chandeliers. The feel is French eclectic and it was designed by Danette Danyow Interiors.

A grand opening is scheduled for sometime after Mardi Gras but they are officially open as of today. Look for them 9 a.m. to 9 p.m. Monday though Saturday. Indulge is closed Sundays unless the space is rented for a special event. Call 534-8700 for details or check them out online at indulgesweetspot.com.