With the 54th Grammy Awards beckoning Sunday, some local musicians are heading to L.A. with the hopes of returning home with an award in hand.

Cajun music band Steve Riley & the Mamou Playboys is up for a Grammy in the American Roots category's Best Regional Roots Album for its Feb. 2011 release, Grand Isle. C.J. Chenier's Can't Sit Down is also nominated in the same category. For that matter, another Louisiana group, The Rebirth Brass Band's Rebirth of New Orleans is nominated, too.

And in the Best Compilation Soundtrack for Visual Media category, Lafayette's CC Adcock is one of the various artists on the Grammy nominated True Blood: Volume 3 release.

Riley, David Greely and the Grand Isle's producer, Adcock, will represent the band at the Grammy Awards. 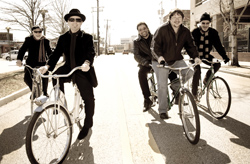 Frontman Riley said the band has been nominated four times in its 24-year run.

The Grand Isle front cover is an oil-soaked shorebird that coupled with the CD's title brings to mind the BP oil spill that began April 2010. It's no mistake.

"It's definitely influeced by the BP oil spill," says Riley, adding that a few, but not all, of the songs take on the disaster. "They're not the happy tunes, but with Cajun music it sounds happy."

With fiddler/band co-founcer Greely retiring almost a year ago and Kevin Wimmer getting indoctrinated, Riley says a new release isn't exactly on the front burner quite yet. Besides, Grand Ilse is but a year old.

"Sam [Broussard, guitarist], Kevin and I have a few ideas," Riley says. "Once we get them tighter, we'll go to into the studio."