Prepare for increased travel time in the center of Lafayette for the next couple of weeks. 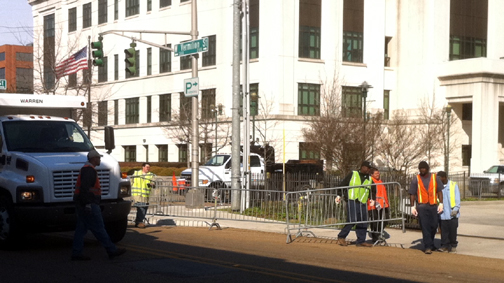 Prepare for increased travel time in the center of Lafayette for the next couple of weeks. Lafayette Consolidated Government crews began placing barricades along the Mardi Gras parade route on Thursday morning, installing the metal menaces in downtown Lafayette from Jefferson Boulevard/Simcoe Street to Congress and Lafayette streets and along Vermilion to Johnston Street. LCG will complete the parade route - from Johnston to North College, ending at Cajun Field - on Friday. Work Friday begins at 8 a.m. and motorists should expect delays and road closures during the installation.

The drive to Baton Rouge and back will likely get burdensome sometime around the end of 2013. The Advocate is reporting that the state Department of Transportation and Development will undertake a $76 million project to overlay Interstate 10 from the I-10/I-49 interchange to the Basin Bridge. The overlay is expected to take about two years to complete.