Girard Park residents cry foul over city's decision to seek its own relief' in a conniving neighbor's lawsuit.
By Leslie Turk

Girard Park residents cry foul over city's decision to seek its own relief' in a conniving neighbor's lawsuit. By Leslie Turk

Girard Park residents' ongoing battle with an unneighborly neighbor, attorney Jimmy Davidson, took an unexpected turn on Jan. 24 when a state district court judge ruled that if Davidson is successful in court, Lafayette Consolidated Government would be entitled to the same relief for property it owns in the area. That "relief," as our Feb. 1 cover "Don't Back Down" analyzed, is Davidson's lawsuit against his neighbors to nullify a 1940 covenant that restricts Girard Park Drive frontage to residential use.

But those residents are asking the judge to nullify his judgment or grant a new trial, saying defendants in the original action were never served with the city's intervention before the decision was rendered by District Judge John Trahan, nor were they served or given any notice that a hearing on the motion for judgment had been scheduled. "The first they thing they knew was a judgment had been signed," says attorney Gary McGoffin, who has been hired by a group of Girard Park homeowners to help fight Davidson. What's more, the residents claim, no evidence of any agreement of the involved property owners to terminate the covenant was presented to the court, and they say there is no proof as to the actual ownership of the property by LCG. 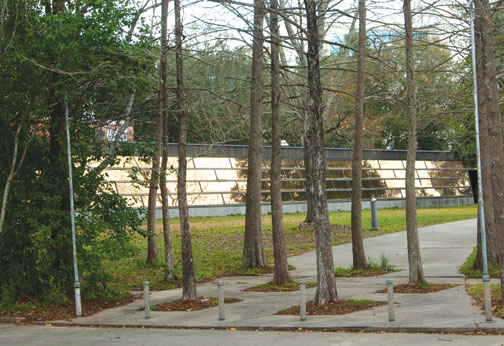 "We simply took advantage of [Davidson's] suit to give us more options on the planetarium site," City-Parish President Joey Durel says of government's decision to intervene in the controversial lawsuit involving the Girard Park neighborhood.
"This building, as I understand it, can be nothing but a museum, period."

LCG maintains that two of its properties, the former planetarium site and Heymann Memorial Park, are both part of the covenant in question. In Davidson's effort to void the covenant and sell his 4.1 acres at Girard Park and Hospital drives at their highest commercial value, he has been gathering support from affected residents since the mid-1990s and claims to now have releases from owners of 50 percent-plus of the total acreage encumbered by the covenant. It appears that there are roughly 50 acres affected.

Residents opposed to Davidson's lawsuit - he named 19 of his neighbors as defendants - fear that voiding the covenant will lead to more commercial intrusion in their historic residential setting. McGoffin is confident his clients can win in court, noting in part that Davidson has yet to present a plat to account for all the property encumbered by the act. Because of that, it's unclear whether Davidson has the support he needs.

In a separate legal filing fighting Davidson's effort to void the covenant, a group of Girard Park residents is asking the court to force Davidson to prove how much acreage is affected and that he has the required support among those property owners.

A hearing on the neighborhood's motions is set for March 5 at 10 a.m.

LCG's attorney, however, believes Davidson has already proven his case and is adamant that LCG is not taking sides. Mike Hebert told The Independent that after reviewing the matter, he concluded that Davidson "appears to have obtained the consents of a necessary number of property owners to have the restriction lifted." Hebert says it is in LCG's best interest to seek the same relief, which is why he filed the Dec. 14 Motion for Judgment on the Pleadings. "As a general proposition, it is in the best interest of every individual property owner to have the most unrestricted use of its property available," he says. "This proposition is even implicitly recognized by the Louisiana Civil Code, which, in Article 778, provides in pertinent part that Doubt as to the existence, validity, or extent of building restrictions is resolved in favor of the unrestricted use of the immovable.'"

If LCG does not participate in the lawsuit, Hebert notes, it is legally questionable whether rulings in the suit would bind LCG or apply to LCG's property. "In an effort to remove any doubt on that matter, my opinion was that LCG should intervene in the suit," he says.

Hebert believes the intervention is a way to avoid the expense of future legal proceedings to determine whether the restriction applies to LCG's property and stresses that local government was not requested to sign a consent to release the restriction from its property, nor has it not done so on its own. But whether LCG's property will be counted is a matter for the court to decide. In his suit against his neighbors, Davidson argues that the city's property should either be excluded from the percentage calculation or included and considered released because of its non-conforming use.

Hebert was authorized to take action by City-Parish President Joey Durel and says council approval for the legal maneuver is not required. "We simply took advantage of [Davidson's] suit to give us more options on the planetarium site," Durel says. "This building, as I understand it, can be nothing but a museum, period. As it deteriorates, it becomes blight in that neighborhood. When I first got in office, there was a minor effort to turn it into an oil and gas museum, which would have been an acceptable use. That effort failed, and there has been no further discussion from anyone. So, when we saw that Davidson was trying to get some relief, we saw an opportunity to help give us some flexibility."

But Girard Park residents who are battling Davidson - the current president of the Louisiana State Bar Association who once surreptitiously ran a plastics manufacturing business on his residentially zoned property - say because the city is seeking the same relief as Davidson its intervention serves to help his cause. They believe the city's action was premature and that they were intentionally, and improperly, left out of the process.

"I have no idea what [Hebert] looked at. When I checked out the suit record, there was no evidence. I don't know if they put any evidence in," McGoffin says.
For their part, Davidson and LCG have teamed up to ask the judge to reconsider his ruling and are asking the court to rehear the case at the same time, in essence acknowledging that the defendants were not properly notified of LCG's intervention.