The Comprehensive Plan Citizens Advisory Committee met with planning consultants from the Philadelphia firm contracted to produce Lafayette's comprehensive master plan on Monday as members of the Tea Party of Lafayette kept a watchful eye. 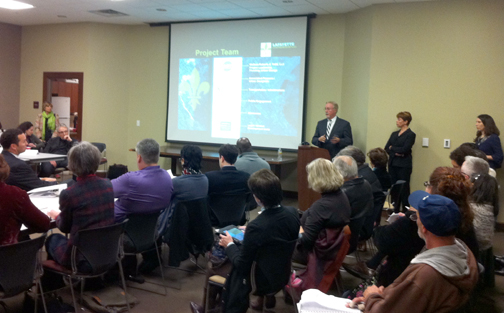 The Comprehensive Plan Citizens Advisory Committee gets an
overview of the process from planners Monday evening at the Rosa
Parks Transportation Center.

The Comprehensive Plan Citizens Advisory Committee met with planning consultants from the Philadelphia firm contracted to produce Lafayette's comprehensive master plan on Monday as members of the Tea Party of Lafayette kept a watchful eye.

The day's activities included a bus tour of the parish, which continued on Tuesday. About 20 members of the CPCAC gathered at the Rosa Parks Transportation Center downtown Monday evening following the bus tour to get an overview of the planning process from Wallace, Roberts & Todd, which in December inked a $1.2 million contract with Lafayette Consolidated Government to help produce the master plan. The committee also began ironing out some technical issues including on what days and at what time public meetings would be held.

Roughly 25 members of the public, many of them members of the local Tea Party, filled the limited area for public seating during the meeting. At one point during the meeting discussion among members centered around a suggestion by committee member Don Bertrand, who opined that the group could be more productive if it conducts public meetings at 7 a.m. This didn't sit well with some in the public gallery and with a few committee members.

"I wouldn't do anything that would lead one to conclude that we're limiting public input," cautioned John Fernsler, the lead planner from WRT. Although the group didn't set a time for public meetings, which will commence in about a month, the consensus seemed to edge toward conducting evening meetings to promote public engagement.

The Tea Party of Lafayette posted notice of the meeting on its website last week under the ominous heading "THEIR PLAN...YOUR PROPERTY," and the wariness of the group was evident among at least a few who attended the meeting, with one woman asking the WRT team during the meeting whether her property would be expropriated.

The question raised some eyebrows among the planners and committee members, although Fernsler answered the woman's question with an emphatic "no."

Fernsler did, however, seem to acknowledge that comprehensive planning meets with resistance in some quarters. "There will be controversial issues that can't be avoided," he told the committee. "We're not going to duck from any of the tough issues."

Fernsler's associate, Silvia Vargas, gave the committee an overview of the process, which will be conducted in four phases. Phase One, which is under way, includes committee assignments and tours of the parish as the planners and committee members get acquainted with the needs of the parish. Phase Two includes developing a vision for Lafayette's future and building a framework for the master plan; this phase will last from March to October. Phase Three includes actual development of the plan and its many components, occurring from November to July of next year. And Phase Four will be implementation of the plan, which will rely on the City-Parish Council approving legislation and funding for the plan.

Check out tomorrow's cover story in The Independent for more on resistance to community planning including a way-out-there conspiracy theory centered around a little-known, 20-year-old United Nations resolution.