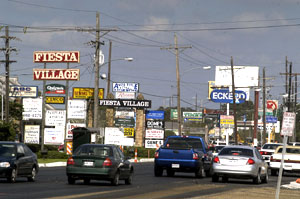 When Councilman Bruce Conque drove through the commercial strip of Bloomington, Ind., during a recent business trip, he took note of the absence of billboard ads and parking lots visible through his windshield. Parked cars were largely hidden from view by roadside berms and shrubs and local stores displayed small, monument signs instead of large, pole-attached advertisements towering over the roadway.

"It's definitely not hampering business," says Conque of Bloomington's strict commercial landscape regulations. "If anything it's helping because they are booming."

He now hopes some of the same principles are on their way to being integrated throughout Lafayette.

"It's a growing trend across the nation to address the aesthetic value of a community," he says. "I think we need a new sign ordinance. It's one element of smart growth. It's a visual step to improving the whole community."

The City-Parish Council has already adopted its strictest zoning regulations to date, including a ban on pole signs, for a new stretch of development coming to the recently opened portion of Louisiana Avenue connecting to Interstate 10. Now the council is considering additional sign restrictions across the parish.

At its last meeting, the council was scheduled to vote on an ordinance limiting all new commercial signs to a height of 30 feet. That ordinance has now been tabled in favor of a more comprehensive study on the issue. After the study is complete, the City-Parish Planning, Zoning and Codes Department will then schedule public hearings on any newly drafted sign ordinance.

Conque says he would like to see the parish explore a monument sign requirement for some areas of Lafayette. City-Parish President Durel has also suggested a move to less obtrusive signs and is pushing for a property tax break for businesses that agree to change their signs ahead of any imposed deadline. Durel, who used to own a retail pet store, says he understands signage can be expensive for small businesses. "I'd like to see us use a carrot, an incentive [for businesses to adopt smaller signs]," he says.

Councilman Lenwood Broussard has also requested that all local sign companies be involved in any plans to revamp the parish sign ordinance. He says he is concerned a sign height limit of 30 feet may be too restrictive for some parish businesses, such as those located off interstates and frontage roads. "I'm really not a pro on this," Broussard says. "But when you think about it, 30 feet, that's not that high."

Councilman Chris Williams, who proposed the across-the-board 30-foot height limit on signs, now agrees that some concessions may need to be made for certain businesses. "We're trying to come up with something that is middle of the road that both parties feel is reasonable," he says. "I don't think we'll ever be a monument sign community."

One model the Planning and Zoning Commission is likely to look at is Lafayette's neighboring city of Carencro. In February, Carencro adopted a new ordinance that, with the exception of interstate property, limits all new businesses to using monument signs. Mayor Glenn Brasseaux says the city first tried to enact a law requiring monument signs for all new and existing businesses three years ago, before local retailers squashed the proposal.

"The retailers were just all up in arms," he says. The resulting compromise was to grandfather in all existing signs. "So, a lot of people say, 'Well you really didn't do anything,'" Brasseaux adds. "But at least it's a start."

Conque says he understands the resistance to change from local retailers, but insists that the alternative may be worse. "People say we have enough rules and regulations," he says. "Well, we didn't have any rules and regulations and look what happened to Johnston Street."