I like your secrets about your favorite eating spots as much as I like passing them along. So when an old pal and pho connoisseur - he is called the Pho King - tells me that there is a little place in New Iberia with the best, I must listen. And then I have to tell you guys about it.

New Iberia has been hiding a sweet Vietnamese place. By Anna Purdy 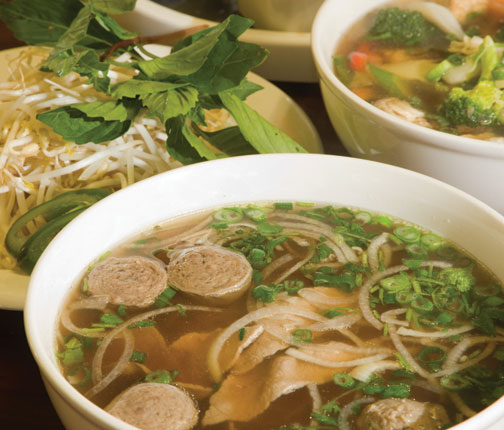 I like your secrets about your favorite eating spots as much as I like passing them along. So when an old pal and pho connoisseur - he is called the Pho King - tells me that there is a little place in New Iberia with the best, I must listen. And then I have to tell you guys about it.

Pho, pronounced "fuh," is the Vietnamese form of noodle soup. Broth, usually chicken or beef, is seasoned with a blend of cardamom, anise, cinnamon, coriander and ginger and served with greens like scallions or sprouts. Rice noodles form its base.

Pho Ly Ly is at 701 Lewis St. next to garages, a bridal shop and a storefront with "shalom" written across it in milky white beneath kissing doves. Its exterior is nothing to look at, and its patio is so far devoid of seating. Don't let that throw you off.

Inside there is a menu with 185 different selections - more when you consider the substitutions Pho Ly Ly can and will make for you. The prices are reasonable, and the servers are very helpful, guiding you toward the best dishes and suggesting their own favorites. If you aren't familiar with Vietnamese food, it's helpful to listen but not vital as the menu provides good descriptions. This is precisely, however, why so much food came to our table. Between the suggestions from servers and fellow patrons, plus reading the menu on an empty stomach, it's a wonder we didn't snack on the very building's mortar.

We began with the Sugarcane Rolls, which is a type of spring roll that definitely prevents a hungry person from eating mortar. It's prepared with a hunk of sugar cane skewering its vegetable innards, which is removed before being wrapped in tender rice paper and served. For $3.75 this is a perfectly light nosh and a good starter.

Our server suggested her favorite, the Spicy Honey Chicken (No. 158 - $10.50): green and red peppers in a sauce garnished with scallions with broccoli rimming the plate and wonderful chicken. The meat was tender with no hunks of fat hanging on for the edible ride and it didn't taste, as with most honey chicken recipes, like the poultry dove headfirst with a death wish into a sea of sugar. It was tangy with a sweet back and sticky without heaviness. The broccoli was perfectly done, heated through to a tender and bright green without becoming mushy. It comes with rice but it isn't necessary to enjoy the dish.

Pad Thai was next (No. 172 - $9.75). The meat was substituted for tofu that could have passed muster with the most carnal of carnivores. Firm tofu is cubed then lightly fried before adding to the dish. The whole dish had a strong flavor of tamarind but not overwhelmingly so.

Now, the aforementioned Pho King friend is notoriously finicky about his namesake meal so when I asked which pho to order he suggested the No. 30, which came with round-eye steak and meatballs.

First of all, I could wear this bowl on my head as armor - it's so huge. You can eat off one typical bowl of pho for several meals, and at $9.50 for a large serving it's well worth the price. Also tried was the vegetarian pho, and it was just as delicious. There are seafood and poultry versions as well.

Try the Vietnamese coffee that kicks like a velvety mule or the Salty Lemon Soda made from pickled lemons ground up and added to soda water with sugar.