You don't want to miss out on a classic Mardi Gras costume fundraiser today and Monday at Cité des Arts.

You'll find it all in a Mardi Gras costume, a colorful aspect of Cajun culture that can be worn, especially this time of year.

And you can own it because Cité des Arts, 109 Vine St., in downtown Lafayette, has racks and racks of classic Mardi Gras costumes that are going for a very reasonable price and for an even more reasonable cause: Cité des Arts.

"It could be a really great fund-raiser for us right now," says Christy Leichty, program director, Cité des Arts. "The arts aren't a high priority in the state right now with the recession and all that."

Cité will be open today and Lundi Gras.

The arts organization got a hold of the costumes from Brett Breaux, who found them in a building he'd purchased in New Iberia for a new Café des Amis restaurant.

"And upstairs in this old hotel were two rooms full of Mardi Gras costumes, and they've been there 20, 30 years," Leichty says. "He asked the folks who were storing would they come get them, did they want them. They weren't very excited about moving them." 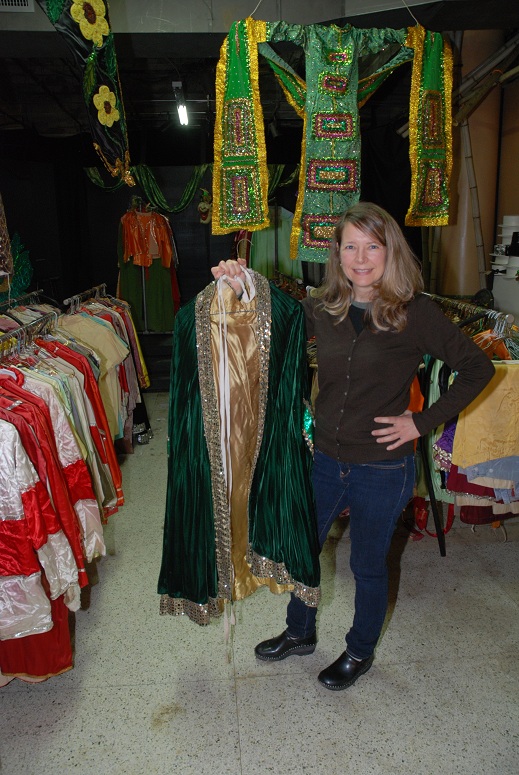 Christy Leichty holds up one of the classic Mardi Gras costumes that are going for a very reasonable price and for an even more reasonable cause: Cité des Arts.

Leichty said some of the costumes will be kept for upcoming productions (think Shakespeare), but the remainder are for the fundraiser.

"So all proceeds got to Cite des Arts," she says.

Prices range from $5 to $500 - a deal, if not a steal once you see the jackets, pants, vests, shirts all in the traditional Mardi Gras colors, as well as hues you've no doubt seen in a rainbow. And as Mardi Gras costumes go, they're unisex outfits.

"They're made really well - most of this stuff is handmade," Leichty says. "A lot of it's lined which blows my mind.

"How much are these worth?" Leichty asks. "If you had to reinvent these from scratch, how much would it cost you? How much time would it take?"