Louisiana BellSouth president visits Cingular call center, and The Saints may have to open their books. 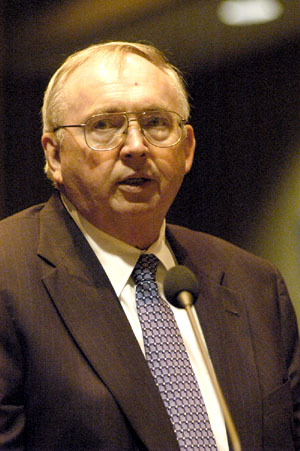 At the Cingular call center that employs 1,300 people on Pont des Mouton Road, Oliver held meetings with groups of employees throughout the day, asking them to vote "no" on this Saturday's referendum for Lafayette Utilities System's proposed fiber-to-the-home network. A source at Cingular says Oliver argued that the fiber project would be funded by government subsidies. (BellSouth owns 40 percent of Cingular, which received $18 million in state and local concessions to set up the call center here in 2001.)

Handouts supplied to employees stated: "Thank you for helping Fiber411 get the word out." Fiber411 is a local group that also opposes LUS' fiber-to-the-home proposal. Another handout instructed employees how to absentee vote and requested that employees "Please take the time to go and absentee vote. Please try and get 2 people every day this week to go absentee vote." A third sheet asked employees to submit the names and phone numbers of five residents within the Lafayette city limits who would vote against the referendum.

Oliver also apologized to employees for recent news articles that had stated BellSouth would shut down the local Cingular call center should the LUS referendum pass ("Unlikely Advocate," March 9). However, Oliver did not admit to making the statements.

Oliver said that the local media had managed to twist BellSouth's message, reportedly stating: "They'll print whatever they want." Oliver informed Cingular employees that six months ago, BellSouth decided not to make its arguments known to the public because the company's point wouldn't be represented correctly by the local media. ' RRF

A LOOK AT THE SAINTS' BOOKS?

Last week, the New Orleans Saints received a check from the state of Louisiana for more than $12 million as part of the state's annual payment to keep the football team in Louisiana.

Under an agreement struck in 2001 between former Gov. Mike Foster and Saints owner Tom Benson, the state must pay $186 million over the course of 10 years. The most recent payment was for $12,415,267.53. Last year, the state tapped into an economic development fund to pay the Saints and has yet to refill those coffers.

Gov. Kathleen Blanco has attempted to renegotiate the agreement with the Saints as the state continues making the payments. Benson broke off negotiations with the Saints until after the upcoming football season, when the team has the option to back out of the deal with a payout of $81 million.

In related news, Blanco and her administration should be closely watching an antitrust lawsuit filed by Hamilton County, Ohio, against the Cincinnati Bengals and the National Football League. That suit contends that the NFL conspired to misrepresent the financial position of its teams to secure public funding of a new stadium for the Bengals. A federal magistrate judge ruled last month that the NFL must turn over revenue and profit information for every franchise dating back to 1990 to Hamilton County attorneys. The NFL has appealed the ruling, but if the judge's decision is upheld, all the Saints' financial information will become public for the first time ever. ' SJ