National nonprofit the Trust for Public Land wants to buy UL Lafayette's horse farm property and hold it until LCG can pay for it. 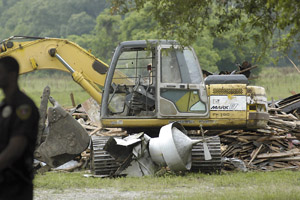 In December 2005, in the midst of UL Lafayette's proposed land swap involving its horse farm property, local civil engineer Keith Delhomme contacted the New Orleans office of the Trust for Public Land, a national nonprofit land conservation group he hoped could help preserve the raw acreage as greenspace. Now, more than a year later, the TPL has stepped up to the plate, notifying UL President Ray Authement by letter last Friday that it is working with Save the Horse Farm members to develop an option agreement to purchase the 100-acre horse farm for a new city park. By Monday, Larry Schmidt, who heads the TPL's New Orleans office, had a Tuesday, May 15, meeting scheduled with the university president.

Schmidt says he wants to ask Authement for a 180-day due diligence period, in which the TPL will pay for the horse farm's new appraisal, title clearance and related matters. During that time, Schmidt's organization would work out an agreement with Lafayette Consolidated Government (or the entity that would ultimately own the property) and then finalize the terms of the transaction with Authement. In a nutshell, the trust would buy the land (a 20 percent down payment is required), and hold it until the city-parish can pay for it. "The funding scenario has yet to be determined," says Schmidt, who will be in town Friday to discuss the matter with Save the Horse Farm members, community leaders and City-Parish President Joey Durel.

"I am anxious to hear what they have to say," notes Durel, who has maintained an interest in the property but says LCG has no funding for it. "I agree we're never going to have this chance again."

Schmidt explains that the TPL would put its resources and expertise into solving the funding issue by exploring a number of sources, including federal grants, philanthropic donations, fund raising efforts, monies or a partial land swap from local government, as well as the option of selling some lots for residential development. "It can be a combination of ways to address funding," he says.

Established in 1972, the TPL has helped protect more than 2 million acres of land in 47 states in much the same fashion.

Friday's meeting will be held at 11 a.m. at Lafayette attorney Glenn Armentor's downtown office. A scheduling conflict may prevent Armentor from attending, but the prominent local lawyer is a staunch supporter of the community effort. "I'm a million percent for saving that horse farm," Armentor says.

In light of the TPL's interest, Save the Horse Farm is anticipating similar support from a broader base of community leaders. The group had a handful of architecture students work on a preliminary design for the park ' so that residents can get an idea of what's envisioned and to help with the fund raising effort ' and recently established a greenspace fund with the Community Foundation of Acadiana.

Save the Horse Farm understands the need to act quickly.

On the evening of April 27, just hours after announcing his retirement, Authement told KATC-TV3 that the horse farm property is a liability and he intends to sell it. "It's a very valuable piece of property; I now have four solid offers for the property. If it sold, however, it would have to go out for bids," he said to reporter David D'Aquin. "Potential buyers include a developer who wants to build upscale homes on the land and an individual who wants to buy the entire horse farm to build a single, private residence on it," Authement continued.

However, Schmidt says he does not think the property has to go out for bid if the TPL offers a fair market price to the university after the property has been independently appraised. Jerry Jones, director of the state's Office of Facility Planning and Control, says any agreement to sell the property to LCG or the TPL would, instead, likely require legislative authorization. "Otherwise, it may have to be bid," Jones explains.

Standing just outside of the gate to the horse farm property Monday, where she watched bulldozers crush the old red dairy barn to rubble at Authement's request, Save the Horse Farm co-founder Danica Adams says her grassroots organization is optimistic about the outcome of Friday's meeting.

"We can't be distracted by this setback," Adams says of the barn, which was torn down despite overwhelming opposition by the community and state legislators Mike Michot and Joel Robideaux, who represent residents in the horse farm area. "Authement has said that he would entertain our proposal first, so we're holding him to that," Adams says. "What we need to do is get a proposal on his desk as soon as possible."