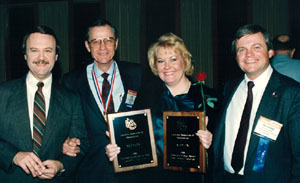 Tom Pears was a planner. Besides his beloved wife, Laura, his constant companion was a legal-size, yellow tablet on which he jotted a litany of thoughts and ideas. Day and night, he made notes to bounce off the many sounding boards in his life. If you agreed with his idea, you were probably going to be assigned that project. If you disagreed, you were in for a long debate.

Take for instance, the time he decided to tackle the tricky world of politics. In 1974, culminating nearly two decades of service to the Greater Lafayette Chamber of Commerce, he was elected president and embraced the idea of a one-cent sales tax to fund construction of a domed stadium/convention arena. KLFY News Director Jim Baronet disagreed, saying residents would not support a tax increase bearing the name of the then-controversial mayor, in calling for a downtown arena. Predictably, it led to days of discussion. Pears could not see the political intrigue. For him it simply was the right thing to do.

Under Pears' leadership, KLFY TV-10 became a powerhouse of community influence. An endorsement from TV-10 might have altered political races, but Pears would not use that kind of clout.

The worth of a man cannot be measured in ink, but it's certainly impressive to see the life of Tom Pears in print. Somehow, he found the time to impact an amazing cross-section of the community. As an Eagle Scout, he was devoted to the Evangeline Area Boy Scout Council. He served on a number of planning commissions, guiding the growth of Lafayette, and was committed to improving race relations, the economy and the social fiber of his community. He loved God openly and was a member of Asbury Methodist Church. He was a Shriner, a Mason and a veteran.

There will be some who will say, "That's not the Tom Pears I knew." And, in a way, they will be right. In 1947, when Pears launched his broadcasting career, Evan Hughes was his mentor at KVOL-Radio. Hughes has always said Pears "could sell iceboxes to Eskimos." In the quest for land to build a new TV-10, one of his salesmen secured what he thought was a real bargain. He proudly outlined the deal to Mr. Pears, only to be told to go back and offer half of the asking price.

In 1963, Pears accepted the position of sales manager for KLFY. Three years later, he was the general manager and was later made president. When Texoma Broadcasting sold KLFY to Young Broadcasting in 1988, Mr. Pears moved to Waco, Texas, as the CEO for the Texoma Stations. His retirement in 1997 brought him and Laura back home to Acadiana.

Dubbed by many as the best-looking couple in Lafayette, Tom Pears and Laura Langlinais wed in 1951. She was already his best friend. They had three sons ' Thomas, III, Mike, Kelly ' and a daughter, Tracey. His dedication to KLFY's success cut into his family time, but he was there when it mattered, and each of his children know they were well loved.

We also know we were loved, and we also knew how unbending he could be. My first job at TV-10 was as the receptionist. Sometimes on beautiful, spring days, I would go on picnics with my boyfriend. One day when I was half an hour late, I got a lecture about the dangers of boys and a severe reprimand. I think he was disappointed that he couldn't ground me.

He was not perfect nor was he a giant. He was simply a man who tried to do his best every day of his life. Acadiana, and especially those of us who knew and loved him, are the beneficiaries of the results of that struggle.