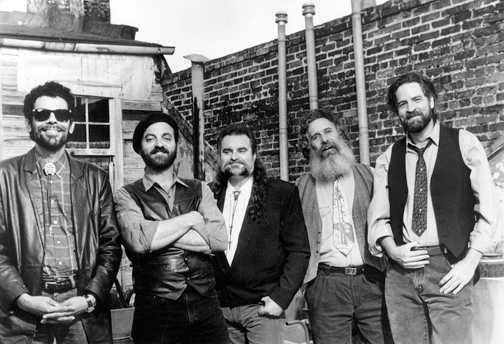 I was the piano pounder with Filé Cajun Band for about 12 years beginning in 1990. In the earlier days of my tenure, '91 or '92, we made a routine stop at the Stephen Talkhouse in Amagansett, N.Y., up on Long Island, one of my favorite venues. A rustic, funky little club, folks would come from all over the Hamptons to catch whatever roots act was playing. I had heard tales of famous musicians hanging out at Filé gigs there, staring at their shoes and bobbing heads trying to figure out the asymmetrical timings of Cajun/Creole songs that were second nature to us. Sir Paul had been in. Billy Joel and Bruce Willis had been regulars. Amazingly, people would pay $40 covers without thinking twice. It was a different economy up there, which placed more of a premium on van-weary Cajun bands from Lafayette.

Upon arrival, we were informed that the group Foreigner was hanging out with Kathleen Turner and hubby, and that they would make an evening of it. We were politely asked if we would mind if Foreigner did a mini-set on our equipment. We agreed, knowing we would get a long break out of the deal.

We played the first set as the club gradually filled. One minute into our break, in came the procession of Kathleen and some rock star-looking dudes who strode right up to greet us rather vacantly, looking over our shoulders to assess our equipment. "Are you the guitarist? Yes, this amp will do" and so on. The condescension was not lost on us - we had seen plenty of it. We muttered under our breath things like, "Yes Sir, Your Royal Pompousness. We're only here to serve you."

This may have been one of our fatal flaws. We could be a bit quick to take offense or to perceive a slight. Maybe it was a script we had collectively written for ourselves. Or maybe there was plenty to slight. But we were still one great band that could conjure up a raggedy Cajun raucousness hard to match on any night. With some re-adjustment, I was ready to give Foreigner the benefit of the doubt - they had made some great songs.

Filé took command of the pool table as Foreigner began its set. Lou Gramm had departed the band and was replaced by a younger blue-eyed soul singer. Damn, he really was good. He looked perfect. They were making a sort of comeback - hadn't had a hit in years. They went through the old ones, tons of them, "Double Vision," "Hot Blooded" and my favorite, "Dirty White Boy." I must say, they rocked and that guy sang like the devil. I shot, scratched and wondered in a moment of doubt, how would we follow?

Soon came the inevitable and the unexpected. Foreigner finished with a big ol' bang. By now, the club was absolutely packed. Foreigner ambled on down into the crowd.

We made our way onto the stage. As we removed their sweat towels from our stations and re-adjusted our instruments, the most amazing thing happened: The entire venue erupted into a thunderous standing ovation that seemed to go on forever, all for us. We just stood there, drawing their energy like voltage into a light bulb. It was as if the folks were saying, "OK, so much for Star Time. Now let's get down to what we came here for - YOU guys!"

Suddenly, we were bulletproof. All those monotonous miles left our tired bodies and psyches. No one could slight us. We cranked up. We ruled. We hit it hard and people went nuts, dancing around like drunken, liberated jackasses. Let the party begin.

As our set progressed, various Foreigner members pussyfooted up and asked if they could sit in. We said, "Sure, and here's your drink, still sitting on my amp." The singer did some version of "Baby, Scratch My Back" with us that didn't seem to have anything to do with anything. I think Slim Harpo would have cut his eyes. But we all made nice, made friends, made music and had a magical night that I'll never forget.

Or so I thought we had made friends. After the club had emptied and we had loaded out our gear, there were only musicians and club personnel left lingering for one last drink. As the lights were going down, I headed for the door with one of the English fellows. I won't say which one, because those guys really did make some great songs.

But in parting, I offered up to this bloke, "If you ever make it to South Louisiana, give us a ring. We'll show you around, get some good food. Hell, we'll even take you out in a boat and show you some alligators."

That's when he turned on me. Suddenly, with his drunken, melting face, he went into an obscene vodka-stinking tirade, which I wouldn't want to quote in this fine publication. It was mostly unintelligible, but had something to do with "I know all about your [doggone] alligators and all that [doggone] Cajun New Orleens [doggone] [dad-gum] [stinkin'] fiddles ..." and whatever-the-hell he was talking about. Then he stumbled and tumbled and down he went.

I helped him up, of course, having a soft spot for drunken old Limeys.

We would return to the Stephen Talkhouse many times. On the next trip there, I would meet quite a different Superstar - the girl I would marry.

David Egan is a Lafayette singer-songwriter who plays piano with swamp pop supergroup Lil' Band O' Gold and his own group, Twenty Years of Trouble. His songs have appeared on multiple Grammy-winning/nominated albums. Visit his website at DavidEgan.net.